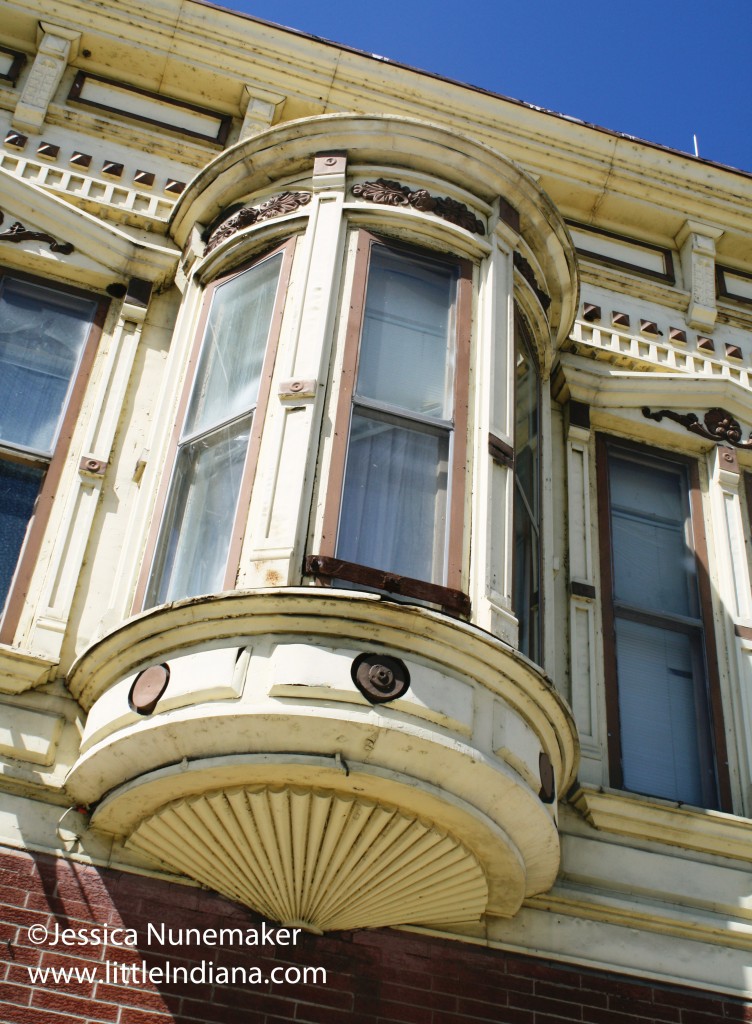 Clinton, Indiana has an amazing, very lengthy downtown for a town with less than 5,000 people.

This Central Indiana town is sharp. It’s just one awesome building after another. Clinton buildings had plenty of unique features and intricate scroll-work.

But that’s not all. There are historic sites here, too. According to The Daily Clintonian Bollittino Edition that I picked up while in Clinton, the large bronze statue, the Voice of the Immigrant (North 9th St.), is found at what is known as the Piazza Del Immigrante.

It is a nod to Clinton, Indiana’s Italian heritage.

The Voice of the Immigrant bronze statue shares the space with a very unusual bull-head fountain and tall granite fountain.

As a coal mining town, with plenty of Italian immigrants, the fountain stands as another reminder of Clinton’s Italian roots.

Now, the bull-head statue is unusual in that that particular style of bull is an image that is normally associated with Torino, Italy, which is a far cry from little Clinton.

Two residents of Clinton, Indiana, Joe and Mary Airola, gave the face pattern to the Little Italy Festival Town (or LIFT) back in 1970–and it is quite a story.

Things to Do in Clinton, Indiana 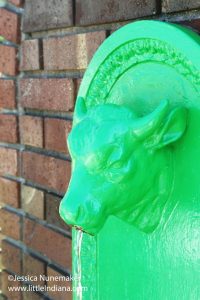 You’d have to head to Italy for more of this style.

Ready for a little Indiana history? Hundreds of years ago, the poor little town of Torino, Italy fought one war after another. The people just about lost hope and so decided to stampede their little town with bulls. Lots and lots of bulls.

The evil invaders were run down by the masses of bulls and the town then became known as Torino. Toro is Italian for, you guessed it, bull! The good people of Torino do not sell any of their bull-head fountains. Instead, the Airola family, through a series of connections in the town, were given permission from the Mayor of Torino himself to use for a replica in little Clinton, Indiana.

At one point, so I have read, this fountain contained the only piped water in the town for years. Isn’t that incredible?

Italian immigrants made up the majority of mine workers (both deep shaft and strip coal mines) in Clinton, Indiana. Who knew there was a mine around here?

As a lasting tribute to Clinton’s Italian heritage, the Airola family made another contribution, this time commissioning a statue by Italian sculptor Carlo Avenati. The Airola’s also brought this one back in 1970.

While the mines have long been closed, the town has not forgotten where it came from. 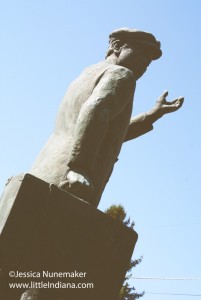 This one town could make the history buff, shopper, or general food-lover pretty happy.