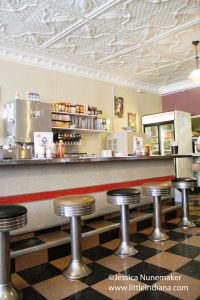 George’s Koffee Cup in Kouts, Indiana makes me want to pack it all up and move to Kouts!

From the friendly, talkative waitresses to the chatty patrons and sunshiny interior, it’s a great Porter County restaurant.

When hubs and I were walking down main street in Kouts, we asked a small group of overall-clad men just where we should go to eat. They unanimously agreed that George’s is the place so, of course, George’s it had to be!

One of them said to make sure to get the potato soup if it was on the menu that day. Unfortunately it wasn’t–but at least now you know.

Entering George’s Koffee Cup in Kouts, Indiana bears a great resemblance to walking into the home of a good friend. There’s talking and laughing and everyone is yakking not only to those at their own table, but to people walking in or out or even a few tables away.

It really is the epitome of small town and what every small town restaurant should aspire to be. 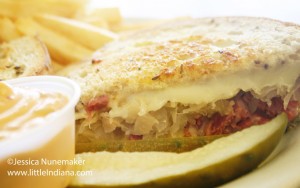 We did have that moment when you walk in and absolutely everyone turns and looks at you (like in every very small Indiana town). You can see them trying to place you, wondering where you came from, and if you are related to someone in town. We quickly sat down.

There were both booths and chairs and a lovely tin ceiling. Just spectacular. They just don’t make ’em like  they used to!

We placed our order: a Reuben Sandwich for me (surprise, surprise) and the Fish for my husband, Jeremy. We also had a bowl of soup. Yummy, yummy soup. In fact, the soup came in a bowl and we so should have requested something smaller, like a cup of the stuff, instead. 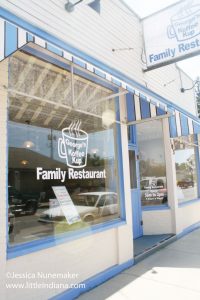 If you are looking for the fun of an Indiana town, George’s Koffee Kup in Kouts is an excellent place to start or at least include somewhere along the way. You won’t go wrong with a meal at George’s, either.

It will give you a healthy dose of small town atmosphere and plenty of personality for sure! Don’t forget to say “hi” to Sherri, my “not so shy and quiet waitress” as she calls herself).