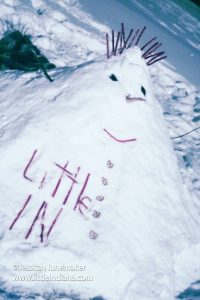 When a little Indiana Facebook Fan posted something about a “flash mob” at Milroy Park in Rensselaer, Indiana to make snowmen we couldn’t wait to begin!

This Jasper County park is a tiny triangle of land surrounded by streets.

We were the first people there but sat in the car until someone else, who happened to be a reporter for the local newspaper, the Rensselar Republican, showed up. Our images did make it into the newspaper.

Unfortunately, the snow didn’t pack! What a bummer. My husband suggested that we make a snow mound instead. You can see our efforts  and others dotted around the park in the video below.

Even though Kid #1 received presents today that he has been very super excited about from a branch of the family tree, he (repeatedly) declared that his favorite part of the day was making the snowman.

Something so simple that lasted maybe 20 minutes and didn’t cost a thing (except a few pretzels, red licorice, and a carrot or two) turned into the best part of his day.

Here’s a tip from little Indiana: take some time out. Enjoy your family and those random events in Indiana towns. The memory of presents will fade but time spent together doing something is what the season is all about!

View Larger Map
Don’t miss a moment. Subscribe to little Indiana and receive instant updates to stay on top of everything “little.”