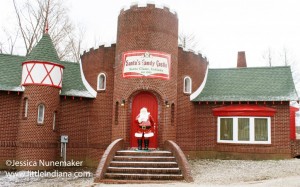 Santa’s Candy Castle in Santa Claus, Indiana  was the first themed attraction in the United States!

Now this Spencer County attraction is re-opened but with a slightly different focus.

The candy castle opened in 1935 but everything changed during World War I when peoples’ focus shifted. By 1950 the man behind the Castle (who was still trying to keep it going), Milton Harris, passed away. Santa’s Candy Castle changed hands a few times until 1970 when it sat vacant and once even used as a home until it’s grand re-opening in 2006!

I was picturing wall to wall candy and began preparing for battle with the kid but it’s not! It’s more like a combination Indiana bookstore and a bit of a candy story! Shelves lined with books hug the circular walls at Santa’s Candy Castle except for one–which is reserved for Santa’s comfy chair.

In the center of the main circular room is a table with computers. For several bucks (nothing outrageous, I promise) you can let your kid chat directly to Santa. There’s a little quiz for your child to answer that pertains to his good behavior or lack thereof. Yes, our son lied on all of them, but at least we know that he knows what he is supposed to do!

They get the satisfaction of knowing that they are on The Good List and receive The Good List Certificate. At the candy counter where you check out (which the owner happened to be manning) they even announce your child’s achievement. Kid #1 thought he was pretty big stuff. 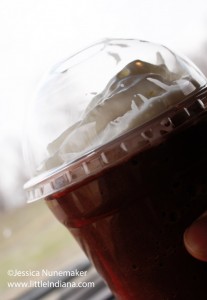 At the time of this writing, this Indiana town shop has a wall of bragging rights. If you can drink 64 ounces in an hour your name goes on the wall.

If I had tasted it before we got in the car I so could have won! It is probably one of the best drinks I have ever had. Absolutely fantastic–even on a cold, snowy day. 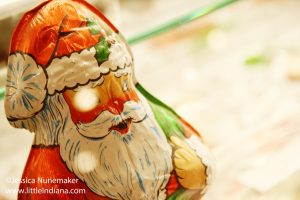 People seem to come in droves so if you time it right, you will have easy browsing, no fighting over computers, and maybe even catch a little one on one time with Santa (he’ll read a book to your child). We went, left, and returned later. Much better!

Here’s a bit of advice for you: if the parking lot is absolutely packed full of cars–don’t go then! Instead, come back later when it’s not so busy. Trust me. There’s so much to do in the area it’s easy to fit it in (and it’s a great place for snacks)!