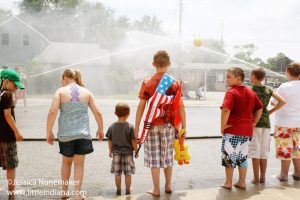 There’s more than corn in Indiana–if you happen to be in North Judson, Indiana, you’ll learn that there is also mint!

Each year, this Starke County town closes off a street or two and celebrates their mint farm heritage with the North Judson Mint Festival.

little Indiana could not believe all of the planned activities! If you are a member of a festival planning committee and need a few ideas, you should surely take note. Now, I’ve been to a festival or two (ahem) but I’ve never been to a festival that had so many fun things to do. And for all ages!  This is a new committee, and I’ve been told it was quite the learning process, but wowza–they did a great job.

I watched a frog jumping contest, a waterball contest, a pie eating contest (different rounds for a variety of ages), and then some! The North Judson Mint Festival was an absolute blast! I’ve never  seen any of those before–and I can’t wait to share video with all of you.

What is really fun and unusual (and something that Kid #1 would just love) was the fact that the participants in these events got ribbons. The winners actually earned themselves a trophy! So cute.

There was more to do than that! There were craft and miscellaneous booth vendors, carnival rides, a beer garden with live music throughout the afternoon and evening, and even a Church chicken dinner right down the street (you know how much those port-a-pit dinners rock!). 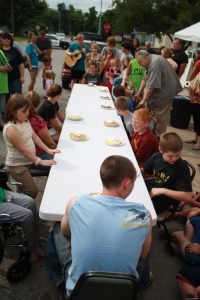 The fabulous FingerHut Bakery was there with a booth just steps away from their butter cookie filled shop. The day of the North Judson Mint Festival they were peddling Paczki. Awesome!

There was a booth with a line of funnel cake in all sorts of flavors. No, I didn’t just sit around and eat funnel cake. Well, not only funnel cake. There were cheese fries, too!

Actually, there were loads of food vendors peddling that glory of glories: fair food! Have I mentioned how much I loved this annual festival? 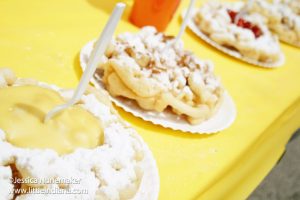 It’s only going to get bigger and better. The new committee hopes to restore it back to the giant event that it once was, when people would come from miles around to visit this Indiana town festival. Though, really, it absolutely was fantastic as it was.

Make plans for next summer. Visit the North Judson Mint Festival in North Judson, Indiana and bring the kids, grand-kids, or the neighbors next door. It’s sure to be a great time for all! I’ll see you there.