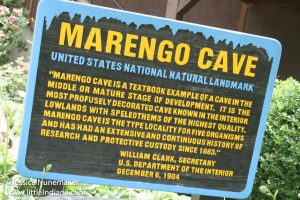 While the rest of Indiana may be suffering from a heat wave, Marengo Cave in Marengo, Indiana stays a nice and cool 52*!

Is this Crawford County cave the perfect place to beat the heat or what?

Would you believe that the history of Marengo Cave begins back in 1883? Fifteen year old Blanche overheard boys talking about wanting to explore a sinkhole. She convinced her 11 year old brother to go with her to beat them to the punch!

Using candles, they lowered themselves into what turned out to be an enormous cavern in the large cave.

A few days later they told the owner of the land and Marengo Cave was officially open for tours! Can you imagine that? I just love this piece of Indiana history! 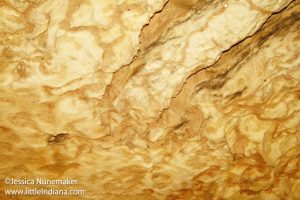 While waiting for our tour to begin, we tried our hand at gem mining, courtesy of Marengo Cave. They kindly gave us three bags just packed with goodies: Gemstones, Fossils, and Arrowheads. It gave the kids something to do while we waited for our tour and it was pretty fun. Kid #1 still takes out his treasures to look them over every now and again.

There are two walking tour options at Marengo Cave: We started with the first option, The Crystal Palace. A 40 minute trail, we figured it would help us feel out whether or not Kid #2 could handle it. Kid #1 was beyond excited to get started!

You can expect to see gravity-defying helictites, flowstone, stalagmites, stalactites, Cave Popcorn, and one of my faves: draperies. The most amazing part of the Crystal Palace Tour, in my opinion, was Mirror Lake. It was absolutely beautiful. It seemed as though you were looking into a very deep hole when instead you were looking into water!

This is a much longer trip. This time you’ll be walking around for a good 70 minutes! You’ll start with a trek through the woods to get to the entrance of Marengo Cave’s Dripstone Tour. Entering the cool cave couldn’t feel better!

There’s all sorts of neat history in this cave. At one point, a section of the cave was closed for tours due to land disputes. The tin cans left behind to show where folks weren’t allowed to pass are stuck to the cave floor and still there to this day.

I (sorta) enjoyed the story of the robbery. Back in the 1980’s, a man actually robbed folks on the tour! He hid and when he came out demanding money, folks thought it was part of the tour! They quickly figured out he was for real when he fired his shotgun. The robber took what he could get and then turned out the lights, plunging everybody into total darkness. Would that be scary or what!

Lucky for them, the guides know where the switches are. Power was soon restored. Within two weeks, the man was in jail–earning himself a ten year sentence! It is the one and only robbery to take place in a cave. 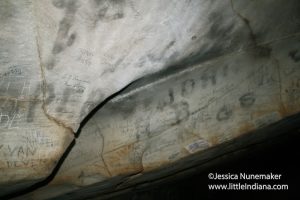 The four of us absolutely loved Marengo Cave. The guides are very good at pointing things out and they certainly knew their history.

Kid #2 did rather well and Kid #1 talked about the tour for days (and days and days). Marengo Cave in Marengo, Indiana is a wonderful family-friendly destination!

Special thanks to everyone at Marengo Cave for making us feel so welcome and to Spencer County tourism for hosting our stay. My opinions, as always, are my own.