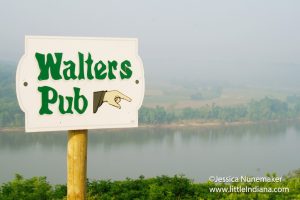 Walter’s Pub in Leavenworth, Indiana has a jaw-dropping view.

Located on the edge of an overlook, this Crawford County pizza place is more than just a pretty face–it also holds some of the most delicious pizza I have ever had. Ever!

That’s the thing about Indiana towns. You just never know when the place you walk into is going to knock your socks off. It doesn’t matter if it is far in the country or in a teeny tiny town. Walter’s Pub was one of those places.

We didn’t actually get to eat inside Walter’s Pub–we had both of our boys with us. But since we needed something for dinner and it was very close to us–we ended up doing carry out.

My husband, Jeremy, hopped over from The Leavenworth Inn, the bed and breakfast where we stayed, to pick up our pizza. He said the interior was really sharp and very well done. 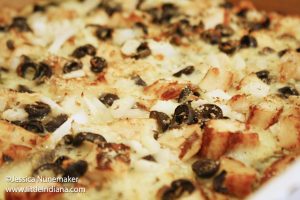 Our pizza was a work of art. Artichokes, spinach, and chicken placed on top of Alfredo Sauce and then smothered in Mozzarella Cheese. Even the kids ate it!

Sure, Kid #1 complained a little but after he tried it? He admitted it was really good. For a kid that is on a Pepperoni kick and a little set in his ways (he is five), that should tell you something right there.

The crust was just incredible. I have never had such a full-flavored thin crust as that one. It was absolutely amazing–and crunchy! They call it a flat bread crust. I call it delicious. It has a crunchiness that is incomparable! I’ve never had a pizza quite like that before. 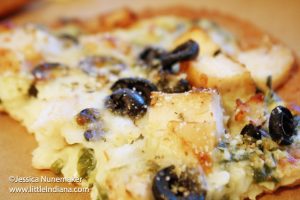 I would love to be able to go back to Walter’s Pub and try something else. They had a few interesting pizza’s on the menu that I am sure would be awesome, like BBQ Chicken Bacon Pizza, Meatball Pizza, or Chicken Bacon Ranch Pizza.

Of course, I could probably try something other than pizza, too. Maybe. Okay, probably not. Pizza from Walter’s Pub in Leavenworth, Indiana is so incredible, it’s worth the trip!