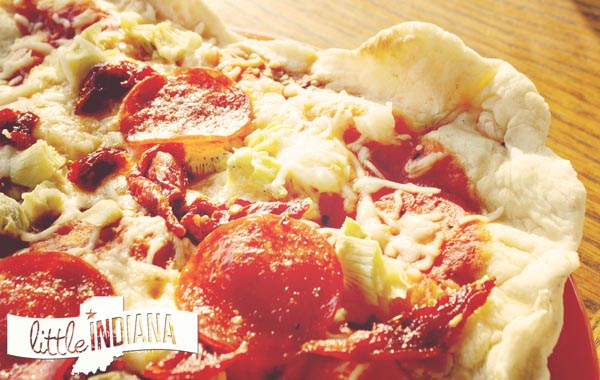 This is our favorite homemade pizza dough recipe. We make our own pizza all the time. It is funny when I think back on it. I don’t think I ever had homemade pizza when I was a kid. It just wasn’t something we did. Ah, scratch that. I do remember one time when those pre-packed pizza crusts hit stores. My mother had bought one and we made it. First time, last time, I do believe.

But we really love pizza and our small town didn’t have a great pizza place at the time. Sometimes, you just need pizza, you know what I mean? In desperation, I began hunting for pizza recipes. I wanted a crust that would taste like something I could find at a pizzeria but without a lot of hassle. It needed to be versatile. Although I am a huge thin crust fan, I wanted a pizza recipe that could make a mean thick crust if I handled it a different way. This is that crust. If you have been looking for a pizza crust that will fulfill all of your make your own pizza at home dreams, you will be so happy with this recipe. We also use it in the pizza pie recipe that we love.

It’s so easy to make and easy to customize. Just add in your favorite seasonings to the dough if you like an extra burst of flavor throughout. Personally, I mix it up. Sometimes I add a little oregano to the crust, sometimes I leave it alone. When it comes to the size of the pizza, I’ve really experimented. If you already have a pizza stone, then by all means use it! This recipe for homemade pizza, however, doesn’t require any fancy tools of any kind.

When I make the dough, I sometimes grab hunks of it to form into personal pizza sizes. The kids can then easily top their own pizzas with what they want (pepperoni or sausage), while we top the pizza with what we want (sun-dried tomatoes, black olives, green peppers, etc.). I’ve made the pizza on a well oiled cookies sheet. Just be sure that if you use a cookie sheet that you choose one with sides, otherwise the olive oil will drip off into your oven. That’s just not good. I’ve made one large pizza using this dough. I’ve also restrained myself from pulling it into a thin crust and, instead, have left it thicker.

The History of Pizza

Growing up, my parents used to travel to some small town, drive down a very long, very wooded drive, to get what they used to call “old man’s pizza.” Yes, this guy made pizza out of his home. In the woods. Way out in the country. I admit, I always found the drive up a little creepy. One wrong move and we would ding a tree. My parents heard about it from some friends and that’s where we used to go for years. It was fantastic pizza. I have a very good food memory and I can still remember picking off the browned cheese and savoring the thin, but not too thin, crust. It was perfect.

I’m assuming the guy stopped making pizza, at least, I remember when we stopped going there to pick up a pizza to bring home, and my dad and I would drive half an hour away to pick up pizza at (the long since closed) Manago’s Pizza. My dad and I had another favorite place that was farther away. Extra cheese, extra sauce. It is what we always ordered. It’s fair to say that these experiences, to travel for something good, have definitely shaped me. But I’m not alone. Did you know that pizza really dates back in history?

Ancient Greeks and Romans were eating a flatbread topped with herbs way back in the day. According to Pizza Facts, remnants of an early pizza was found in archaeological remains in the first millennium in Sardinia, the second largest island in the Mediterranean Sea. Pizza Facts again shares that a 6th century account of Darius the Great (c. 550–486 BCE), the third king of the Persian Achaemenid Empire, was (according to Encyclopedia Brittanica) an “administrative genius” known for his “great building projects. His account (so says Pizza Facts) mentions a flat bread that the soldiers would bake flat on their shields, and then cover it with cheese and dates.

Time passes. Naples is full of a working class of poor. Living in what History.com calls “little more than a room,” it made sense that these people needed something that could quickly be prepared–and consumed. Looked down on by the “upper crust,” pizza may have remained a mystery to the rest of the world if not for the visit of King Umberto I and Queen Margherita in 1889, twenty-eight years after Italy’s union. History.com reveals that the pair would so over the French Haute cuisine they had been eating and were ready for something new.

According to the Ancient Pizzeria Brandi, a pizzeria STILL in existence today, three pizzas were prepared for the King and Queen. The Pizzeria Brandi website states, “the first, “white”, with olive oil, cheese and basil; the second with cecenielle (kind of newly born sardines); and finally, a pizza with mozzarella and tomato.” The Queen is taken with the mozzarella and tomato so much so that they end up naming it for her. They still have the letter that raves about the pizza prepared for the royal couple. Margherita pizza is born–and pizza becomes a “thing.” At least in that part of Italy. It wouldn’t be until the 1940s that pizza would make its way to the United States. Amazing, don’t you think?

History.com shares that immigrants were making pizza in a few of the larger cities: New York, Chicago, Boston, St. Louis, and, in fact, the first licensed pizzeria in the country back in 1905, Lombardi’s Pizza, is still operating today. How incredible is that? As their website reads, “In 1897 an Italian immigrant reinvented a Napoletana staple food into one of the worlds most eaten foods. New York City was the birth place of New York style pizza. During the year of 1905, Lombardi’s was licensed by the City of New York, becoming America’s First Pizzeria.” I guess I’ve got another pizza place to add to my “must eat there” list.

So how does this translate to increased popularity in the 1940s? That’s thanks to GI Ira Levin. After World War II, this suburban New York man was part of a family that were in the oven business. History.com shares that he invented the first “gas-fired, ceramic deck pizza ovens.” Entrepreneurs  could then easily get in on this new business venture–and it hasn’t slowed down since.

How To Make Pizza at Home

Next time you decide to make your own pizza crust, you will know that you are part of a long tradition. There’s no wrong way to do it. Think of using different ingredients like fresh broccoli or barbecue chicken, goat cheese (add at the end of the baking time) or olives of any kind.

We use this versatile pizza crust recipe in our oven and even on the grill. It’s delicious! A hotter than hot oven is key here. The hotter, the better. That’s when you will get a more authentic flavor. I always pre-bake my untopped pizza crust. Try to allow time to do that and you won’t believe the results.

by Jessica Nunemaker
Category Eat Little Towns Recipes
It's great any way you slice it! I found this recipe at Food.com. It has been a family favorite ever since (and we have tried plenty).
Persons
1
Prep Time
15 minutes
Cook Time
20 minutes

italian recipe,
jessica nunemaker,
Pizza
© 2022 Photos are the Property of little Indiana. Do Not Use Without Permission.
http://littleindiana.com/2012/08/homemade-pizza-crust-recipe-versatile-and-good/