This marks another addition to the regular feature here at little Indiana: Indiana Blogs! If you are an Indiana Blogger, please use the contact form and send me an email. You may be featured right here on little Indiana. 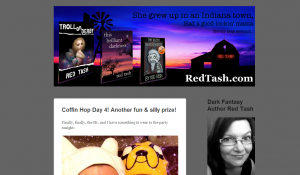 The darker side of writer Leslea Tash, it’s a place for her to let loose with her fantasy writing side. In other words? It serves as a constant reminder that those who enter here have found a safe haven for those things that go bump in the night.

Meet Red Tash. She’s the author of a world some of you may like to get to know: of trolls and fairies, witches and warlocks, and wizards and unicorns. Unicorns? It’s not all scary!

Why did you start Red Tash?
Well, when I chose the pen name Red Tash, I pretty much immediately snapped up the url and all associated usernames that I could to go along with it.  That was in July of last year.

My real name is Leslea Tash, and I have been blogging at Leslea Tash for quite awhile, intermittently.  Prior to that, I was a journalist and I wrote a bi-weekly newspaper column called Guerilla Mothering (as Leslea Harmon) via the CNHI chain of newspapers (many of whom serve small towns in Indiana).  That column was an off-shoot of another writing gig that was an offshoot of a blog!  Whew!  So, basically, I have been blogging forever!  LOL!  About nine years, anyway, in different formats and platforms.

But RedTash.com is special to me because that is the place where I give myself freedom to be as dark, gritty, dirty, nasty, funny, wild, etc. as I want to be.  What fun is a pen name if you don’t use it to explore?

I write non-fiction and a little journalism still under the name Leslea Tash, so I really wanted Red Tash to be the brand that represents the darkly funny side of my writing: the novels!

What about that name? Why did you use your name for your blog?
Until just a few weeks ago, I had a banner that said “Welcome to the Darkness” in the same font as the book cover for This Brilliant Darkness.  It also featured an animated “monster wing” and a winking star, which are elements of the book’s plot.  I think most people just assumed that was the name of the blog, but I honestly didn’t give it a second thought.

I guess I haven’t thought about the name because of the kind of blog it is–it’s the blog of a dark fantasy novelist.  I want you to remember my name and associate it with the things you see or read on the site.

In contrast, I used to do an allergy news podcast and blog and that was titled Allergy News: All the News That Itches.  In that case it was much more about the information for allergy parents than it was about me, you know?

RedTash.com is all the dark fantasy, roller derby, crazy art and other cool stuff I stumble across.  It’s basically like a cross between a playground and the Room of Requirement, from Hogwarts!

After that, it’s hard to choose a favorite.  I recall a lot of fun ones last year during the Coffin Hop, and then over Christmas I know I posted a playlist for Troll Or Derby…I’ve done a lot of giveaways and silly things like Author Fight Club…let me think…

What keeps you ready and raring to post? Why do you blog?
Well, blogging as my pen name about fun, spooky, fairy stuff is a no-brainer.  A lot of my tumblr posts are reshares, too, so those are pieces of art, photography, or animation that I just think are so terrific and inspirational, it would be a crime not to pass them along.

I write my blog because I feel compelled to.  I think everyone needs a journal to contain his/her thoughts.  I can’t handle the panoramic landscape of thought that swirls around in my mind each day.  I write about serious life-issue stuff on my other blog as I feel moved, and am even working on a memoir over there!  But Red Tash is my playground.

The busier my life gets, the more I find I need someplace purely mine, and that’s it!

You also write books! How many have you written so far and, more importantly, are you working on another as we speak?!? Not that I’m hoping for a sequel to Troll or Derby or anything. Hint, hint. Nudge, nudge.
Of course! The sequel to Troll Or Derby will be Troll Or Park, and I plan to write a third called Troll Or Trash!  I’m about half-way through writing the sequel to This Brilliant Darkness, which I’m calling That Crackling Silence for now.

The second half of 2012 seemed to be all about the short stories for me!

I’ve got a couple of horror comics that are coming out soon, a steampunk comic, I’ll have some short stories in anthologies, including a Troll Or Derby story called A Laurents County Landfill Christmas coming quite soon.  I’d like to finish and publish another Wizard Tale soon, as well.

Honestly, I think I have so many options of what to work on next, it’s hard to decide!

Did I see that you used to Roller Derby? What was that like?
Yes!  I was Tyra Durden, #8 on the Derby City Rollergirls in Louisville, KY.  It was extremely fun!  It was the hardest work I’ve ever done in my life other than have my kids!  9 hours of skating each week, and a lot of time spent promoting the team online, not to mention all the events!

Roller derby is a lifestyle.  I loved it when I was part of it, but I always knew that it would be a season in my life and starting “late,” at age 35 at the time, it was tough to keep up with the younger girls!  I’m glad I went for it, though.  It obviously helped inspired Troll Or Derby, and it really taught me that I could do anything I put my mind to, even things that I was scared to try, like use my body to hit people while skating!

Is there anything else that you would like little Indiana readers to know about you or your blog?
I have a genuine love for all things Hoosier.  I have lived here nearly all my life, growing up in Memphis & Sellersburg, Indiana.  I have also lived in Corydon, New Albany, Jeffersonville, Bloomington, and the tiny hamlet of Oolitic!

I attended two Indiana universities (IU and Oakland City), and I even set my first book (This Brilliant Darkness) in Bloomington.  Almost all my fiction, in fact, is set in small town Indiana!  The town of Bedrock in Troll Or Derby is based on Bedford, Indiana, and The Wizard Tales (not an affiliate link) begin in Southern Indiana at a rural drive in.

If you’ve ever looked around at your small Indiana town and thought “This place is so crazy!” then my books might be for you.  There’s more to a “Small Town” than the Mellencamp song, I think.  I try to capture everything we love–and love to hate–about life in the sticks!  Having said that, I truly do bleed cream & crimson, and there is no place like home.

Sometimes people ask me why I write about Indiana in my work, and I just have to shrug and admit “That’s what I know!”  It’s what comes easiest to me.

See? That wasn’t so scary after all, now was it? Anyone who thinks roller-skates rock is okay with me!

You’ll want to check back–in a few weeks I’ll be giving away a paperback copy of one of her books! Is that perfect for settling into these colder months or what? Oh, and today also happens to be Leslea’s birthday! Why not go wish her a happy one?