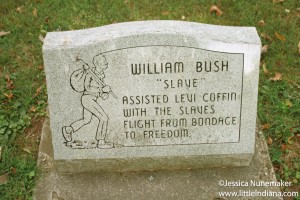 Not so far away from the Levi Coffin House in Fountain City, Indiana you’ll find Willow Grove Cemetery.

What’s so special about this cemetery is that it holds the grave site of William Bush, a former slave who helped others find refuge at the Levi Coffin House.

In case you don’t remember, the Levi Coffin House has been dubbed the “grand central station of Indiana” for its efforts at helping escaped slaves make their way North to freedom.

It’s been said that 2,000 people made their way to freedom, stopping briefly at  the Levi Coffin House before continuing on in their rush to safety. Of course, we will never know the exact numbers as no one wanted to get caught with the names–but think of all the people that passed through those doors.

William “Billy” Bush was one of those people.

The Story of William Bush, Slave 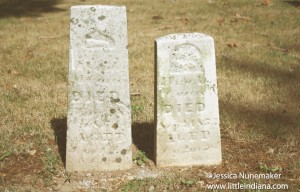 He traveled to the Levi Coffin House in a box. Word of mouth is that he left Cincinnati. Who knows how many hours of nervous waiting and discomfort were behind him by the time he reached Levi and Catharine Coffin in the early days of Wayne County. In wooden shoes.

Whether he took the last name of “Bush” due to his appearance when he finally got out of that box upon his arrival or after seeing Levi Coffin, it’s unknown. Both stories seem equally plausible.

But what we do know is that he ended up staying! In fact, William Bush helped other slaves on their flight to freedom from the places he lived.

Eventually, he decided to stay on permanently, most likely due to the friendliness and, I would imagine, the acceptance, of his presence in the mostly Quaker town of Fountain City, Indiana.

At the Levi Coffin House, you can see his wooden shoes (thought to be from a background in blacksmithing) and a few other items on display. At this Indiana cemetery, you can see his gravesite and the graves of his descendants!

What’s interesting here is that unlike other cemeteries of the time, the Quaker cemetery of Willow Grove did not separate races.