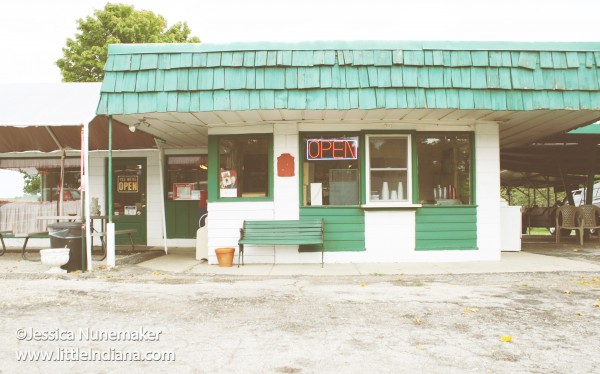 When we asked locals where to eat, they quickly pointed out Bernie’s Barbecue in Morgantown, Indiana.

After we learned about the commercial smoker here, you know we were all for it! 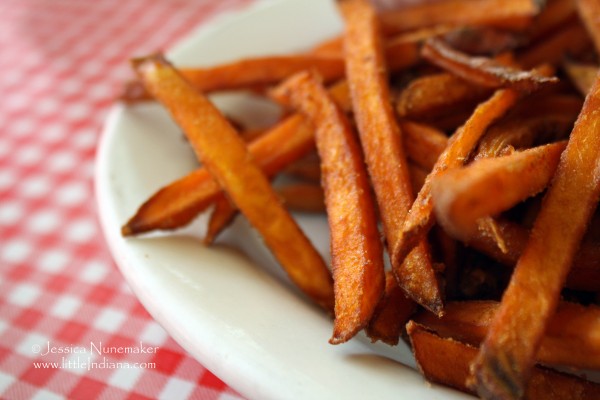 With the locals’ recommendation ringing through my ears, we headed to the edges of Morgantown. Opening the car doors, delicious smells wafting through the air beckoned us inside. We were powerless to resist.

Following our noses, we sat down and browsed the menu. At Bernie’s Barbecue, there are yummy and delicious homemade items on the menu. It caught my attention with a handmade breaded pork tenderloin sandwich and Bernie’s original Beef Manhattan sandwich. Homemade sides like Rajean’s Cole Slaw, Mac ‘n Cheese, and Macaroni Salad were a couple of options.

Our boys were easy: Kid #1 wanted a hamburger and Kid #2 got the Chicken Fingers. They shared a side of French fries. It was a “just right” portion for them.

I was faster this time and quickly claimed dibs on Bernie’s Pork Brisket Sandwich, what was recommended highly by a local, and ordered a side of sweet potato fries. My husband, Jeremy, ordered Bernie’s BBQ Pork Sandwich with a side of homemade potato salad. 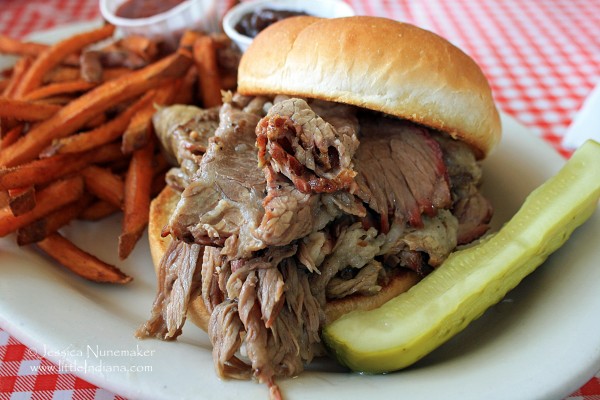 Served with a generous cup of apple butter, those sweet potato fries felt more like dessert! What a great pairing. Talk about a genius idea. Even so, that doesn’t mean I didn’t later enjoy a bit of dessert at Bernie’s Barbecue. But you’ll have to stay tuned to learn about that one.

Our meal was excellent and, I have to say it, that barbecued brisket was definitely the one to get! It is so tender and juicy. You’ll love the flavor. The owner is a man who knows his way around a smoker. Wow. 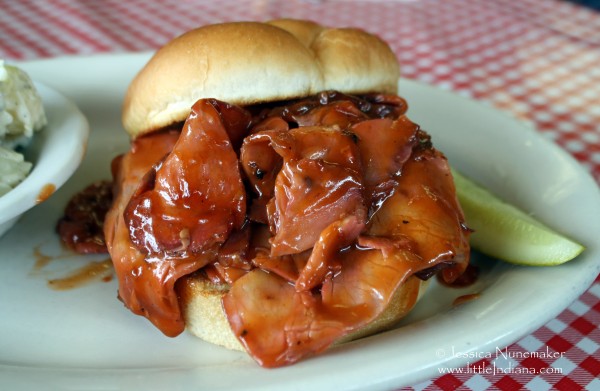 For a great local atmosphere in a true mom and pop restaurant setting, you’ll want to add Bernie’s Barbecue to your “must eat” list. It will remind you of the old diners, with its checked red tablecloths. The service was friendly and attentive.

There’s so many reasons to shop and eat locally. When you head to Bernie’s Barbecue in Morgan County, don’t forget to save room for dessert! What is it? You’ll have to look for more goodness from Bernie’s Barbecue to find out the answer to that. Let’s just say that “there’s always room for it.”

Visit Morgan County tourism and browse Little Indiana for more fun things to do and great places to eat.