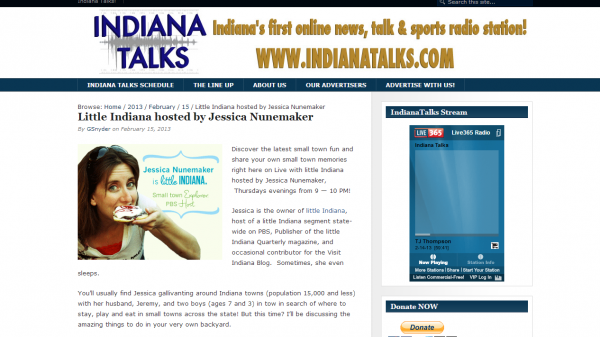 Tonight’s show featured Joe Frost,  as well as John Updike, a lifelong newspaperman, and his youth in Old Fairfield, Indiana–a town that is no longer.

The following items are businesses and places pulled from the show to help you more easily help you plan your own small town adventure!

Off the Off-Beaten Path Segment

Joe Frost is Executive Director of the Indiana National Road Association and Community Preservation Specialist for Indiana Landmarks.  He earned a M.S. in Historic Preservation from Ball State University and a B.A. in Geography from Michigan State University.  While at Ball State, Joe’s research focused on the development of Indianapolis’ early tall buildings. Joe is an experienced historic interpreter; he has gained experience at various historic sites including the Vincennes State Historic Sites, Harpers Ferry National Historical Park, and Fort Mackinac. In 2012, Joe was instrumental in completing the installation of the Historic National Road interpretive panels in Indiana.

John Updike is an Indiana native, a Brookville H.S. graduate of 1964, and a U of Evansville BA 1969. He is an Indiana blogger, writer, and a lifetime newspaperman, John Updike. John has a story to share about his own small town, his childhood stomping ground, Old Fairfield. You won’t find it on any map—it was long ago inundated by water as part of a federal reservoir project. He spent his youth in Old Fairfield, Indiana in Franklin County.