Constructed between 1936-1937, the Fountain County Courthouse in Covington, Indiana is an amazing example of Art Deco architecture. Between the canal and the railroad, this Fountain County town had a great location for growth. 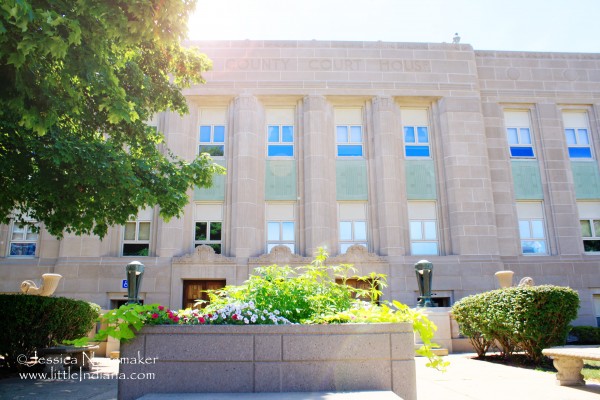 Built at a cost of $246,734 according to the Indiana Township Association, (mind you this is back in the 1930’s) you can imagine that it is a very striking structure.

Would you believe that it’s also relatively untouched? It is on the National Register of Historic Places and, according to the June 8, 1940 edition of the Indy Star Newspaper, it was deemed:

“the most significant example of a New Deal art and architecture project in Indiana.”

In other words: it is gorgeous. It’s a style you don’t see very often, especially on a courthouse. So many of our courthouses tend to lean toward the Victorian era. Though they are stunning, it’s interesting to see something unique, different, well-preserved–and used! 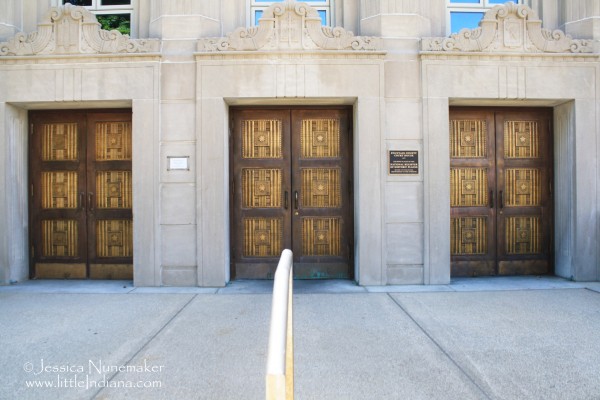 In my digging around, I discovered that the architects, Louis R. Johnson, who was from Fountain County, and Walter Scholer from Lafayette, were rather well-known. Scholer, in fact, designed buildings in West Lafayette and even on the Purdue University Campus.

According to the Fountain County Courthouse website, Walter Scholer was also well-known for his 1933 Wieboldt-Rostone House that was on display at the 1933 Century of Progress World’s Fair in Chicago, Illinois. I thought that was a neat fact.

They made use of Rostone, a synthetic stone-like material that you will find on the spandrel, otherwise known as the place between the arches. Aren’t they something? This stately limestone courthouse has amazing, heavy-looking doors, scroll work, and gorgeous lights. 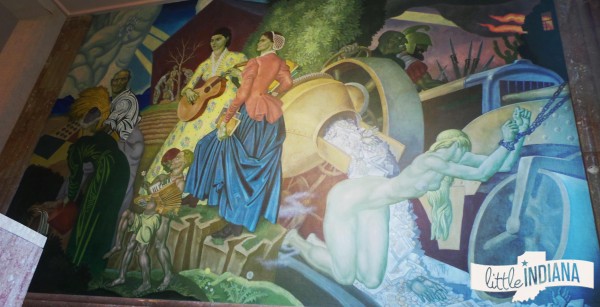 My first visit to the Fountain County Courthouse happened to be when the courthouse was closed. Bummer. I had heard about the amazing murals inside after the fact. So, I made a trip back–this time, during the week.

The first glimpse of the courthouse interior is an impressive sight. Murals cover every bit of wall. Immediately upon entering, you can’t miss the bold mural depicting government expenditure, that you can see above. There’s strong emotion here and was painted by Covington-born artist Eugene Savage (1883-1978). Savage was a nationally-known painter known for his work with the Works Progress Administration (WPA) and beyond. He painted several of the murals here.

He was a teacher at the Yale School of Art and Architecture for twenty-eight years, as the Leffingwell Professor of Painting and Design. Over the course of his career, he painted the alma mater mural at the Sterling Library at Yale University. He had a bachelor of arts degree from the American Academy in Rome, a Bachelor of Arts (1924), and Master of Fine Arts from Yale University. His list of paintings, and where they are located, is long.

Other than the Fountain County Courthouse, his murals can be found at Columbia, Purdue, and Yale Universities. The post office building in Washington, Indiana, the Court of Appeals Hall in Albany, New York, government buildings in Connecticut, and the Elks National Veterans Memorial in Chicago. He also completed a mural for the Hall of State at Fair Park in 1936 in Dallas, Texas.

The rest of the murals were painted by local artists. It is every bit of space, upstairs and down. I can’t wait to hear your reaction to this one.

It isn’t every day that you will find such a glorious Art Deco example in Indiana. If you’ve got the opportunity (and arrive during the week), I strongly recommend stepping inside the Fountain County Courthouse in Covington, Indiana. I had heard that the murals were wonderful and am so happy I was able to make my way back again to see them for myself. The next time I visited, I even brought the kids.