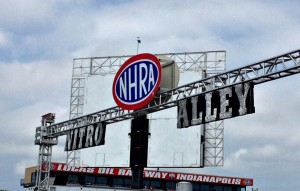 Once a year, thousands of fans flock to Lucas Oil Raceway in Brownsburg, Indiana for a sporting event known as the Super Bowl of racing!

With cars flying down the 1/4 mile track as fast as 300+ miles an hour, spectators are in awe. Cars shake the stands and transmit noises loud enough to reach homes miles away (earplugs are necessary).

Growing up around drag racing — my dad races for fun, and my uncle races nearly every weekend — the sights, the smells and the excitement at the dragstrip never gets old.  However, nothing compares to the U.S. Nationals, one of the largest and most prestigious events in drag racing.

The six day affair is the final race in the regular drag racing season. Top drivers from all over the country arrive at this Hendricks County attraction in hopes of taking a win.

See fan favorites, such as John Force (and his daughters), Tony Shumacher, Matt Hagan, and Allen Johnson show off their skills as they race for time 1,000 feet down the track.

If you’re not watching closely enough, you might even miss them. The fastest drivers take less than 4 seconds to make their way from the starting line to the finish.

Things to See at the U.S. Nationals 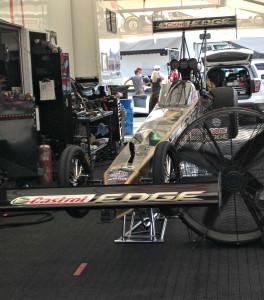 When you’re not watching the cars and motorcycles from the stands, you can take your own lap around the pits (a pit pass is included in general admission).

Take a peek at each race team fine tuning their cars, and if the driver’s around, you might even be lucky enough to snag an autograph.

I had the opportunity to take a look at Brittany Force’s dragster, as she looked over stats near her trailer with a crew member. The driver might be the face that you recognize, but it truly does take a team to get to the U.S. Nationals.

When you’re done checking out the pits, you can take your kids to test out a remote control car, take a lap around the oval track (another part of Lucas Oil Raceway), grab at bite to eat at one of the many food stands, or check out the NHRA merchandise. 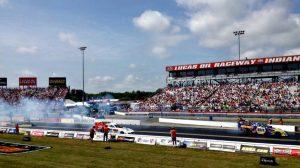 Although the U.S. Nationals only come around once a year — you won’t be able to catch the excitement again until Labor Day weekend, 2014 — there is still plenty to do and see at Lucas Oil Raceway in the meantime.

Race your own car during Wild Wednesday Night Street Legals, check out the Rusty Wallace Driving Experience, or run down the 1/4 mile dragstrip during the 2nd annual Dragstrip Dash.