The cow-shaped cake is delicious.

Kelsey’s Steak House in Valparaiso, Indiana is famous for what is inside and what is outside.

Inside the Porter County restaurant, you’ll find great steak, seafood and other specialties.

Outside, the giant cow statue towers over the parking lot and, from time to time, gets decorated for special events. 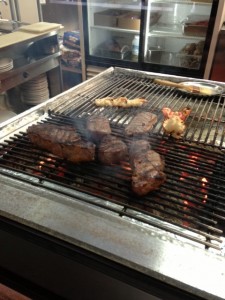 Diners can watch their food being prepared on the grill at Kelsey’s.

Kelsey’s recently won 2014 Restaurant of the Year honors from Indiana Dunes Tourism, and one of its servers, Suzi Galvin, won a Shining Star award for her excellent service. The honors were well deserved, as my family and I were reminded of when we had dinner there on my son’s birthday (he got to choose where we went for his special day).

Arriving shortly after they opened at 4 p.m., we were able to take advantage of some early bird specials at the Northern Indiana restaurant, which run until 6 p.m.

Our meals started with fresh bread and butter for all, ham and bean soup for my son, and a fresh salad served family style for my wife and I. They offered to bring out more salad and bread, too.

I ordered the perch, which had the perfect combination of juicy on the inside and crispy on the outside, served with a baked potato. I also upgraded with a skewer of the mouth-watering garlic butter shrimp.

The ambiance is relaxing and classy. Diners can watch their meal being prepared on the grill because a large glass window separates the grill from the dining area. Most blogs feature shots of the food prepared. This one will feature a shot of food still on the grill. 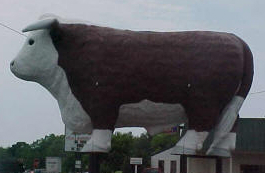 Get your photo with the Kelsey’s cow.

After polishing off the entrees, our server brought a birthday treat for my son – the famous Kelsey’s cow chocolate cake.

Shaped like a cow, the dessert features layers of cake and mousse, all frosted and decorated with a “K” for Kelsey’s and served alongside whipped cream. The cow cake, which anyone can order, fed three with some left over.

Just don’t forget to get your picture taken with the cow statue outside!