A dozen food trucks lined the west block of Georgia Street for Food Truck Friday, an event series launched in March. The event, which runs from 11 a.m. to 2 p.m. until Nov. 21, encourages downtowners and conference goers to try something new each week. On one particular Friday, I did try something new — Circle City Spuds.

Circle City Spuds, which hit the streets in 2011, specializes in gourmet comfort food.

Circle City Spuds hit the streets of Indianapolis in 2011, after truck owner Heather Banter took inspiration from a childhood routine. According to a feature published by the Statehouse Market last fall, Banter and her family would, each Friday, order food from a local pub. The order? Loaded potatoes to-go.

After the economy spiraled downward, Banter chose to fight the recession by starting a food truck. The Circle City Spuds website features a slideshow of the truck’s creation, from empty shell to kitchen on wheels. Today, Circle City Spuds, which also provides catering services, is a common sight at Food Truck Friday and Statehouse Market events. It specializes in serving gourmet comfort food, and, as Banter has said, “taking the spud to the next level.” 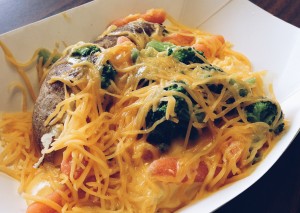 The Circle City Veggie Spud comes loaded with broccoli, carrots and a pool of cheese.

My inner glutton wanted to order the Naptown Mac & BBQ Spud, whose toppings include Circle City Spud’s signature baked macaroni & cheese. However, Circle City Spuds serves — in addition to loaded potatoes — nachos, tacos and salads. I ordered the Circle City Veggie Spud, which included carrots, broccoli and “lots of cheese.” And, since I couldn’t completely silence said glutton, I also ordered a bowl of macaroni and cheese.

When I received my food—for which I paid just $12 — I was stunned. The potato itself was one of the largest I had ever seen, and it was happily bathed in cheese and vegetables. It was cooked to perfection — flaky and light. The macaroni and cheese was likewise comforting, and similar to the sort of dish a grandmother might serve at a family get-together. Overall, the hearty meal was very filling (and very cheesy). Though every dish is available in half-portions, I ordered the full meal and had plenty of leftovers. The generous portion sizes — “more bang for your buck” — contribute to Circle City Spud’s popularity. In fact, it was voted into the Indy A-List’s Top 5 best food trucks in Indianapolis for 2013.

As for 2014? In May, Circle City Spuds plans to introduce Belgian Waffle Ice Cream Sandwiches and, later this summer, will start dishing up special recipe Spud Puffs and Mac Puffs. Until then, you’ll find the blue truck patrolling the streets in and around Indy, dolling out gourmet loaded potatoes and chatting up new fans at events like Food Truck Friday. 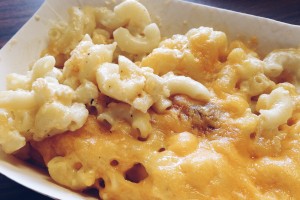 Thanks for lunch! My first food truck experience, and it was awesome! TY! — Jason M.

Thank goodness you put a fork in that box! We devoured the spud on the way home … Thanks so much! — Beth G.

Brickyard BBQ spud was awesome! @circlecityspuds. My tummy thanks you! — @wacky_noodle 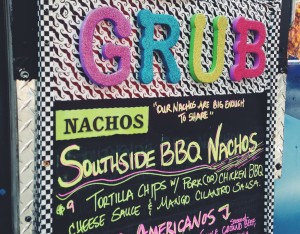