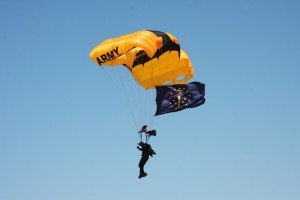 US Army Golden Knights: One of the Acts Set to Perform at South Shore Air Show at Fair Oaks Farms Before its Cancellation

Fair Oaks Farms and the South Shore Convention and Visitors Authority has announced that the big air show originally set for July 11 — July 13, 2014.

After all the hours of work and preparation, as well as the building excitement of what was sure to be a massive event here in Northern Indiana, it must be a huge letdown for the folks behind the organizations as well as air show performers.

Why was the South Shore Air Show scheduled for Fair Oaks Farm cancelled? Well, anyone in Northwest Indiana knows the answer to that!

Unfortunately, we’ve had so much rain! Buckets and buckets and buckets of rain. The flooding has destroyed the plan for parking the estimated 50,000 — 60,000 person crowd. No other alternative could be found and, rather than continue with a sub-par event and complicated solutions, they have decided to cancel it altogether.

According to a statement by Gary Corbett, CEO of Fair Oaks Farm taken from the just-issued press release, ‘the farm has withstood an unforeseeable amount of rainfall, more than 5.6 inches in the last week, 10 inches in the last 30 days and more expected in coming days, which has caused widespread flooding. Corbett explained that without the guarantee of the weather conditions needed to allow the land to dry, it is unlikely the flooding would evaporate in time for the event.’

But, it’s not all gloom and doom.

It doesn’t mean the fun is completely over! Fair Oaks Farms is still open for business and the South Shore CVA has plenty of great things to do in the area, too.

If anyone can deal with a disappointing situation like this, you know it’s a Hoosier! Hopefully it is something they may consider trying again in the future! Let’s hope Mother Nature plays nice next time.