There are more than 60 food trucks in Indianapolis, Indiana but only one of them is emblazoned with the motto “bacon > gluten.”

Caveman Truck is one of the nation’s first Paleo food trucks. The Paleo diet forgoes grains, legumes and dairy, and emphasizes the consumption of high-quality meats and produce.

Caveman Truck, one of nation’s first food trucks devoted to ancestral eating, is described by owner Shelby Malaterre as being “Paleo-owned and operated.” Malaterre got the idea for his truck after starting the Paleo diet in 2012. The diet, which forgoes grains, legumes and dairy, favors high-quality meats and produce. After following the diet for only a few months, Malaterre—who was working in a restaurant at the time—lost 50 pounds. In a blog post, Malaterre said that it pained him to serve the fare to guests in the restaurant.

“I already knew it was not exactly health food, but it had finally registered how toxic it really was,” he said.

Malaterre continued to educate himself on the benefits of the Paleo diet, and he paid attention to the quality of the food he consumed. Less than a year after starting the Paleo diet, Malaterre launched Caveman Truck. The mobile kitchen has been providing the streets of Indianapolis with gluten-free, soy-free and casein-free meals ever since. 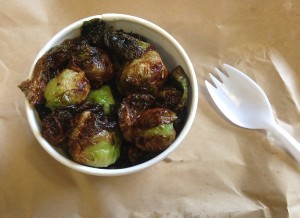 I first visited Caveman Truck in the spring of 2013, when it was parked near Monument Circle. The light-blue truck, upon which a cheery-looking caveman is painted, was easy to spot. I ordered a pair of seasoned patties, which were served with leafy greens. I took my meal to the steps, where, under the warmth of the sun, I wrapped the patties up in the greens and quickly devoured them.

To this day, that particular meal was the tastiest I have ever ordered from Caveman Truck. (I have since ordered the Bacon Hash, the Brussels Sprouts—to which I added more salt—and the Plantain Muffins, which were, for my taste buds, a little bitter.)

That said, praise for the truck’s Paleo fare is common. Positive reviews from those familiar with the diet—or who just want to try something new—are abundant. The Bacon Hash seems to garnish the most compliments, but other items, such as the Chicken Wings, also have been applauded. (Malaterre’s personal favorite is the Barnyard Chili, which features a custom blend of seasoning.) Though the items on Caveman Truck are priced a little higher than what you might see on the average food truck, all of the ingredients are organic and locally-sourced. The proteins, for example—including the bacon—are from 100-percent grass-fed animals.

The plantain muffins, like all of the items on Caveman Truck’s menu, are gluten-free, soy-free and casein-free.

“We’re better off eating pasture-raised animal products than we are processed breads and refined carbohydrates,” said Malaterre in an interview for the Statehouse Market.

Farmers markets aren’t the only places where Caveman Truck is spotted, however. In addition to appearing curbside and at special events, the truck sometimes can be found outside Flat 12 Bierwerks or CrossFit NapTown. Malaterre said a long-term goal includes adding a delivery van so the business can provide, simultaneously, catering services and “farm-to-truck” services. Caveman Truck also offers a selection of meals that can be delivered refrigerated or frozen. The delivery service, known as “Ice Age,” was designed to make healthy food more convenient.

“People began asking if there was a way to stock up on our food,” said Malaterre. “Knowing how well certain dishes reheated, it just made sense to start taking orders for them.”

Some of the items that can be delivered are the Barnyard Chili, the Hummish and the Bacon Hash, as bacon is, of course, “greater than gluten.”

“Everything is so delicious! Chili, tacos, plantains … but my favorite has to be the chicken wings!” — Angel F.

“I tried their Bacon Hash, and if there is one thing you try from this truck it should be the Bacon Hash.”  — Luisanna R.

“Most of the foods I have had are all hearty and filling, and someone who likes comfort style food would find a lot of things they like here. It also has a nice warming quality to it, which really hits the spot on cold days. … The pricing [of items] is high compared to the amount of food you get at other places, but makes up for it with original dishes that are all really good. It probably seems like a better deal to those actually seeking out a Paleo-specific diet, as I’m sure dishes like that are harder to come by, but everyone will surely find it delicious.” — Dylan E. 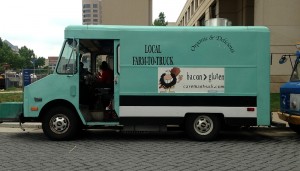