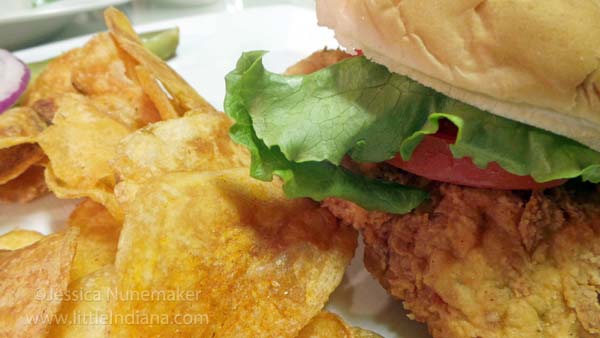 Christie’s on the Square in Salem, Indiana Pork Tenderloin Sandwich

Locals directed us to Christie’s on the Square in Salem, Indiana. They raved about the homemade yeast rolls, a family recipe belonging to the owner.

This restaurant is so large I think it could easily fit half the town! Judging from how busy it was when we arrived, I think maybe it did!

Christie’s on the Square Menu

There’s twinkling lights here and then and some greenery. I can easily see that this is where folks go when they have celebrations. It felt nice yet still family friendly. We were seated in the back on a slightly raised section. Our boys thought that was pretty neat.

The menu was sizable with burgers, sandwiches, and steak. I, however, had heard that the pork tenderloin sandwich was good–and hand-breaded! So, you know what I claimed “dibs” on first! Although my sandwich came with grits, I opted to sub in a side of sweet potato fries instead.

My husband decided to order Christie’s Hot Brown. Described as an “n open faced taste bud pleaser” with turkey, toasted bread, and a cheesy sauce covering it all, we weren’t too sure what to expect. We hoped it would be tasty!

The boys ordered from the children’s menu. The oldest went for the chicken bites while the youngest ordered a peanut butter and jelly sandwich.

Christie’s on the Square Food 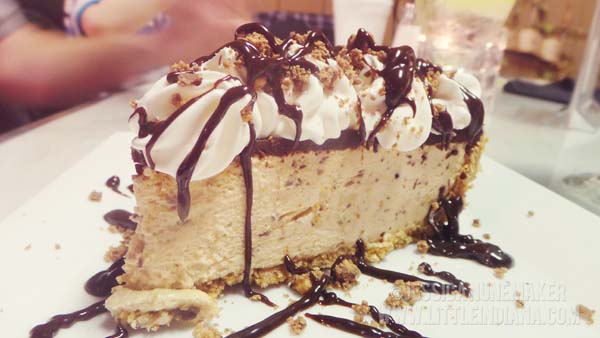 Christie’s on the Square in Salem, Indiana Peanut Butter Pie

My pork tenderloin sandwich was great! It had a bit of bulk to it. Served with the sweet potato chips it was a satisfying meal. But then I tried my husband’s order!

I admit, Christie’s Hot Brown is just about the ugliest entree I’ve ever seen. But as they say…looks can be deceiving! I watched him eat it with gusto, proclaiming its tastiness, before I took a bite. Yes, that is really good. Really, really good. In fact, I would possibly order the Hot Brown if I made a repeat visit to Christie’s kind of good.

Now for the boys. If your child has a healthy appetite, as does our oldest, age 8 at the time, I would recommend ordering from the adult menu. Although his chicken bites came with a side of carrots and a fruit salad, he was still hungry! I’m not sure where he puts it all because, as you know if you have met him, he is a string bean. We did plan on dessert so that helped top him off. Still, it is something to consider and probably why the cut-off age for the kid’s menu is 10. The youngest was just fine with his pretzels, fruit salad, and sandwich. 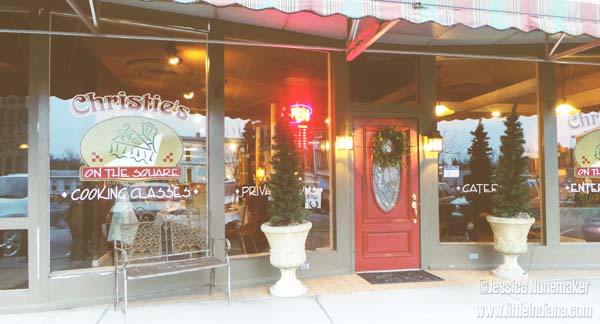 Christie’s on the Square in Salem, Indiana Exterior

There is something else I’ve been hiding from you: Christie’s on the Square isn’t only a restaurant. It’s also a bakery and an outlet for monthly cooking classes! How’s that for well-rounded?

You know that when we hear the word “bakery” our ears perk up a bit. There was no way we were leaving without doing a little research on the best part of dining out: the dessert!

The kid’s menu comes with a scoop of ice cream drizzled with chocolate sauce. So, my husband and I decided to go with carrot cake (him) and peanut butter pie (for me). We knew we would end up sharing with our boys. These generous slices of cake and pie made that easy. 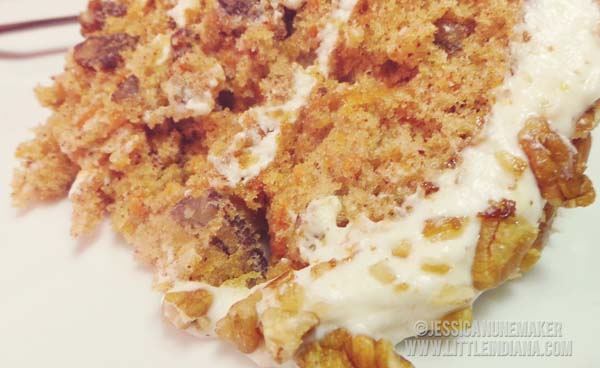 Christie’s on the Square in Salem, Indiana Carrot Cake

Christie’s on the Square in Salem, Indiana is friendly and reasonably priced. We were pleased with the food and service we received. The next time you need a meal and are roaming around Washington County, please do stop!

In a unique twist, if there’s a menu item you particularly love, you may ask for the recipe–and they will share it! Now that’s a kind gesture.