The Carnegie Library in Attica, Indiana is so grand–and I didn’t even get to go inside!

Since I made my way to that side of town after the library had closed for the day, I could only admire the exterior. But what an exterior it is.

First: Why I Love Libraries 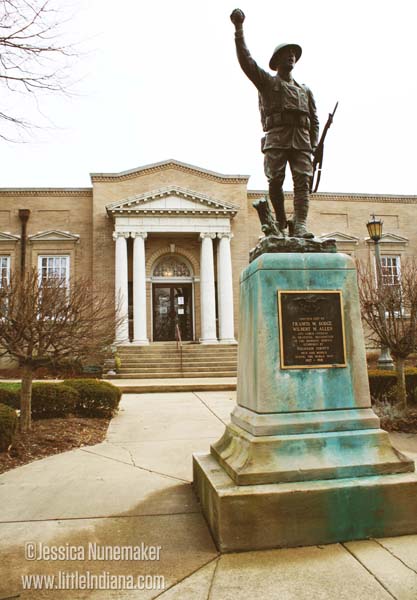 When you walk up to the Attica library, you can only feel awed. This is how a library should look.

You could say that I learned to love libraries at a young age. Growing up, my earliest memories involve story time in the lower level of the large Chicago Heights Library (we didn’t move to Indiana until a week or two before I started Kindergarten). I remember apple juice, graham crackers, and playing the hockey pokey. And books. Lots and lots of books.

My mom read to me most every night. We had multiple library cards. When we felt as though we had read everything there was to read, we headed off to visit a different library. My personal favorite was the old Hebron, Indiana library with their downstairs kids room and assortment of beanbag chairs.

I was seasonally sick as a kid. Normally rather healthy, winters would lay me low and keep me there. Any bit of activity would make me start coughing thanks to undiagnosed asthma. Though I was finally diagnosed last winter (and can keep it under control by keeping my face covered with a scarf when I’m outside in the cold), at the time, doctors didn’t quite know what to do with me, so they prescribed medicine. Lots of different medicines.

While I was recovering from whatever “virus” they thought I had at the time, I picked up books and read my little heart out. My favorites as an elementary kid were the Laura Ingalls Wilder books, anything by Christopher Pike, and a slew of standalone titles that I occasionally re-read to this day. My reading level was pretty up there and, back then, finding enough to read was a challenge! So when I find a library with a bit of character, I get a little rush of happiness thinking about what great undiscovered reads might be hiding inside!

Andrew Carnegie and the Carnegie Libraries 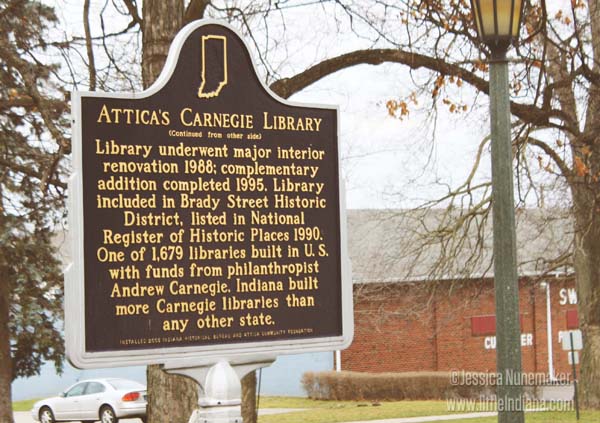 Carnegie libraries got their start, and their name, from Andrew Carnegie. At first, this man who came from a very poor family became a business person with a bent for philanthropy. He only awarded grants for libraries in places that he knew. Fortunately, that changed and he expanded his great deed.

He believed that the wealthy needed to use their money to improve society. Can you imagine what the world would look like if everyone subscribed to that idea? I love it!

Libraries, world peace, science, and education were very important to him. He spread his money around to encourage advances in these industries and ideas. But perhaps his most brilliant move were the Carnegie Libraries. Towns that could otherwise not afford a library were gifted with these beautiful, grand buildings.

There were 2,509 of these libraries built between 1883 and 1929 across the country! Indiana happens to be the state that received the most, with just over 160 libraries.

A sign in front of the library details its beginnings. Attica already had a small library but thanks to the Andrew Carnegie Grant, it opened them up to moving to a different location. The $10,000 grant gave them a gorgeous building!

It opened in 1904. Fountains lie in the front though are kept covered during the winter. The Spirit of the American Doughboy is also in front of the library.

All around, it is an impressive space! 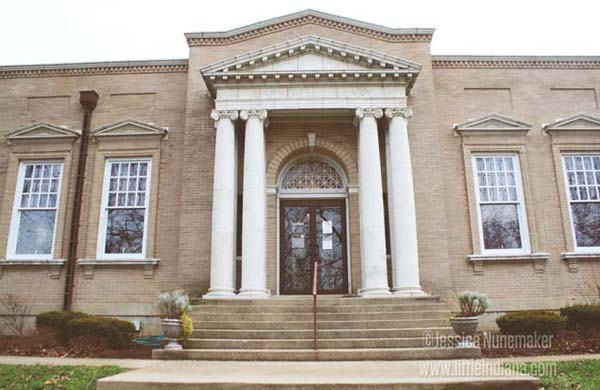 Legend has it that a lamppost or lantern was placed on the outside of every Carnegie Library. It was meant to stand as a symbol of enlightenment. Whether this is true or not, I cannot say, but I like the idea behind it!

For a look at a stately Carnegie Library, please head to Attica, Indiana.