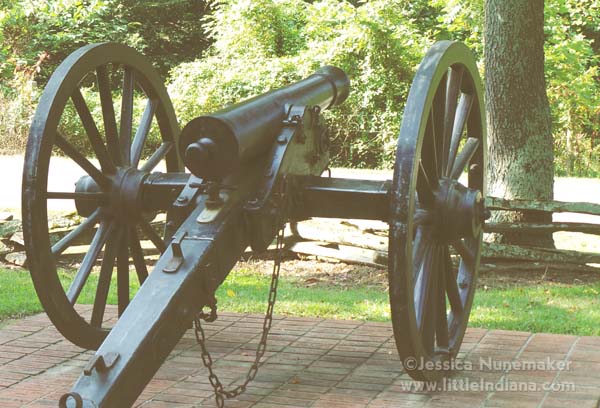 First things first: do not visit Battle Park in Corydon, Indiana and expect a day of picnics and exploring. It’s not that kind of park. There is a cabin located on the property available for a walk-through to show how people once lived. Since it is Indiana’s only Civil War Battlefield it is well worth a visit.

Okay, so the battle didn’t reach epic proportions or anything, but with only two encounters taking  place in the North, it’s kind of a big deal! 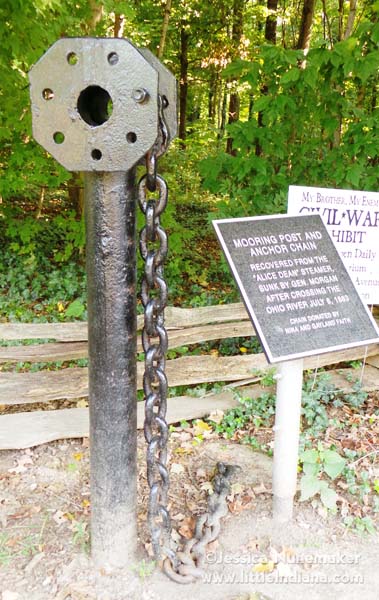 John Hunt Morgan (1825-1864) wasn’t so good at following directions. He has been said to have been quite the womanizer, marrying another woman just a few months after the death of his first wife. A hemp manufacturer, John Morgan spent his free time training what he called the Lexington Rifles, his militia. It’s a bit unclear but it appears that he raised the 2nd Kentucky Cavalry Regiment, became colonel, and fought in the Battle of Shiloh, the bloodiest battle at that time.

Three months after the Battle of Shiloh, Morgan and 900 of his men swept through Kentucky. The three week affair ended in 1200 Union soldiers as prisoner, hundreds of horses, the destruction of Union supplies, and led to a promotion for Morgan as the brigadier general.

He raided the supplies of another Union general, this time receiving the thanks from the Confederate Congress. Ignoring direct orders, Morgan decided to undertake another raid and crossed the Ohio River into southern Indiana thus beginning what became known as Morgan’s Raid. General Braxton Bragg specifically ordered him NOT to cross the river.

The evening of July 8, 1863, Corydon men gathered together to prepare against what was rumored to be 2,000 soldiers heading their way!  The Harrison County Home Guard (known officially as the Sixth Regiment of the Indiana Legion) of 450 men weren’t unprepared, they just didn’t really have much to stop so many experienced men. They were hopeful that New Albany would send reinforcements in time.

When John Hunt Morgan and his men came through, they were only one mile away from town. Alone, the Corydon men held their ground for a good thirty minutes–until the cannons.

When two cannons were fired from the rebel side, the Home Guard flew into chaos, escaping any way they could. Who can blame them? They were outnumbered and ill-equipped to deal with these well-armed, battle-ready soldiers!

Many were wounded on both sides. Morgan lost eleven men while the Home Guard lost four.  Many of the Home Guard were captured but they were returned on parole when Morgan entered the town. Three mills paid up to prevent being torched to the ground. Shops and the town treasury turned over money too. They are believed to have received somewhere around $2000 from Corydon. After an afternoon of pillaging the town, John Hunt Morgan then headed north.

Although John Hunt Morgan certainly panicked these small towns he visited, he lost so many men that he was never able to have the same control in future raids leading to a larger loss of life and tightened Union defenses. He also lost the trust of General Bragg.

On September 4, 1864, Morgan was shot in the back as he made his escape during his raid on Greeneville, Tennessee.

Each year the town gathers together for a large re-enactment of this historic day. They were 450 brave and they are remembered. Visit Indiana’s only Civil War Battlefield in Corydon, Indiana and you can almost hear the cannons fire!