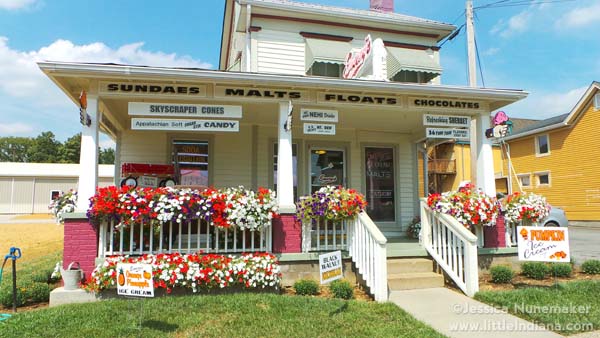 Some people have unique superhero powers. They might have an uncanny ability to find lost car keys, soothe crying babies, or win giveaways like it is no big thing. For me, I stumble on to ice cream parlors. It is a gift.

While driving through the streets of Corydon, Indiana I took a wrong turn that ended up being a RIGHT turn because it led me and mine to Emery’s Ice Cream!

During the 1930s, Emery’s began as a neighborhood ice cream shop…in New Albany, Indiana! It conducted business at 550 Beharrell Avenue. The original 300 square foot building was in serious trouble but has since been taken under the wing of Indiana Landmarks and Floyd County Historical Society for its 2012 relocation to the corner of Eighth Street and Culbertson Avenue to escape demolition. It has since been purchased and will be used as a private art studio (at the time of this writing). The current Emery’s owner purchased the memorabilia like the tin signs and even the counter tops, moving it to its current Corydon location many years before.

The current locale for Emery’s Ice Cream is now an 1817 and 1827 built home. Known as the Adams-Payne house, it was built by Dr. Benjamin Adams and later sold to Honorable (or Major) John Payne in 1827 where he lived until his death in 1847. It stayed in the hands of his wife and children until it changed hands, becoming the Shucks Hotel!

In 1900, the hotel closed down. The central hallway was closed, and thus created two homes instead of one. The Emery’s Ice Cream building that you see is the western portion of the original home–and is it ever cute. Flowers bloom around the lovely front porch, spilling over their flower boxes. An old paved area is currently being removed to become a space for more vivid blooms. But I know you are waiting to learn all about what is inside. Follow me!

The space is small but neat, both in cleanliness and eye-appeal. Those original tin signs hang on the walls, a leftover from its original location. The swivel bar stools line the counter. The original ice cream bins are stocked. The original soda fountain sits at the ready. Once those doors open and the neon “open” sign is lit, the stream of traffic inside is steady.

If you don’t know what you want, well, that’s where Emery’s excels. Let him know your favorite flavors and he will whip up something to match! Maybe he will use a Hot Fudge topping or maybe it will be Dutch Chocolate sauce. It might just include cookies. It will most definitely include whipped cream! 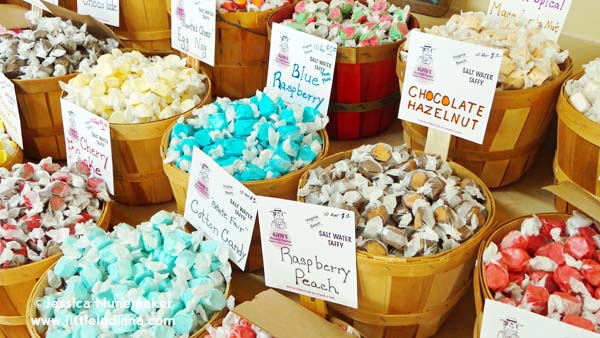 Yes, Emery’s also carries a nice selection of bulk candy. The Virginia taffy selection in particular is staggering! Is there a flavor he doesn’t stock? I don’t think so. Cheaply priced, it’s easy to purchase one for the road, too. How reasonable? Pieces of candy are 5 cents or 10 cents!

Other than taffy, there’s peanut butter bars, candy stix, and all sorts of nostalgia candy. Fireballs, Cry Baby gum, Lemon Heads, Smarties, Root Beer Barrels, Sixlets, Slopokes, Bit-O-Honey, and Tootsie Rolls are but a small, small sampling of the wooden bins filled with open stock candy. There’s even sugar free candies available. You will also find long neck glass bottles of Nehi sodas (or “pop” as we say in Northwest Indiana) as well as other brands.

If it has been awhile since you have been to Emery’s, the spacious new porch makes a welcome addition. There’s no better way to enjoy a summery day than parking it on a front porch and shooting the breeze. Oh, and with a scoop or two of homemade ice cream. Am I right or am I right?