Filming my little Indiana segments for the PBS show, Emmy award-winner The Weekly Special is an awesome thing. The people, the cameras, the lights (the many, many hot lights), and the set are something I never would have dreamed of while beginning little Indiana. It is so much fun! It’s neat to hear how different crew members are familiar with a particular small town. Sometimes, they wonder if I am making them up!

While wandering the hallways until they were ready for us, it was kind of jarring to realize I was hearing my voice! Peering into the open door, I could see my logo playing over the screen as they backed-up a portion, played it, adjusted something, and then played it over again. How about that?

While filming the Greencastle, Indiana segment, I had a chance to read my voice-overs in the NPR studio! Now that was really something. I got to meet a few of the folks there. While walking to the recording area, you can bet I was craning my neck in every direction, trying to take it all in while trying really hard to remember everything I was seeing. I mean, it’s NPR! PBS and NPR in one day. That’s just awesome. 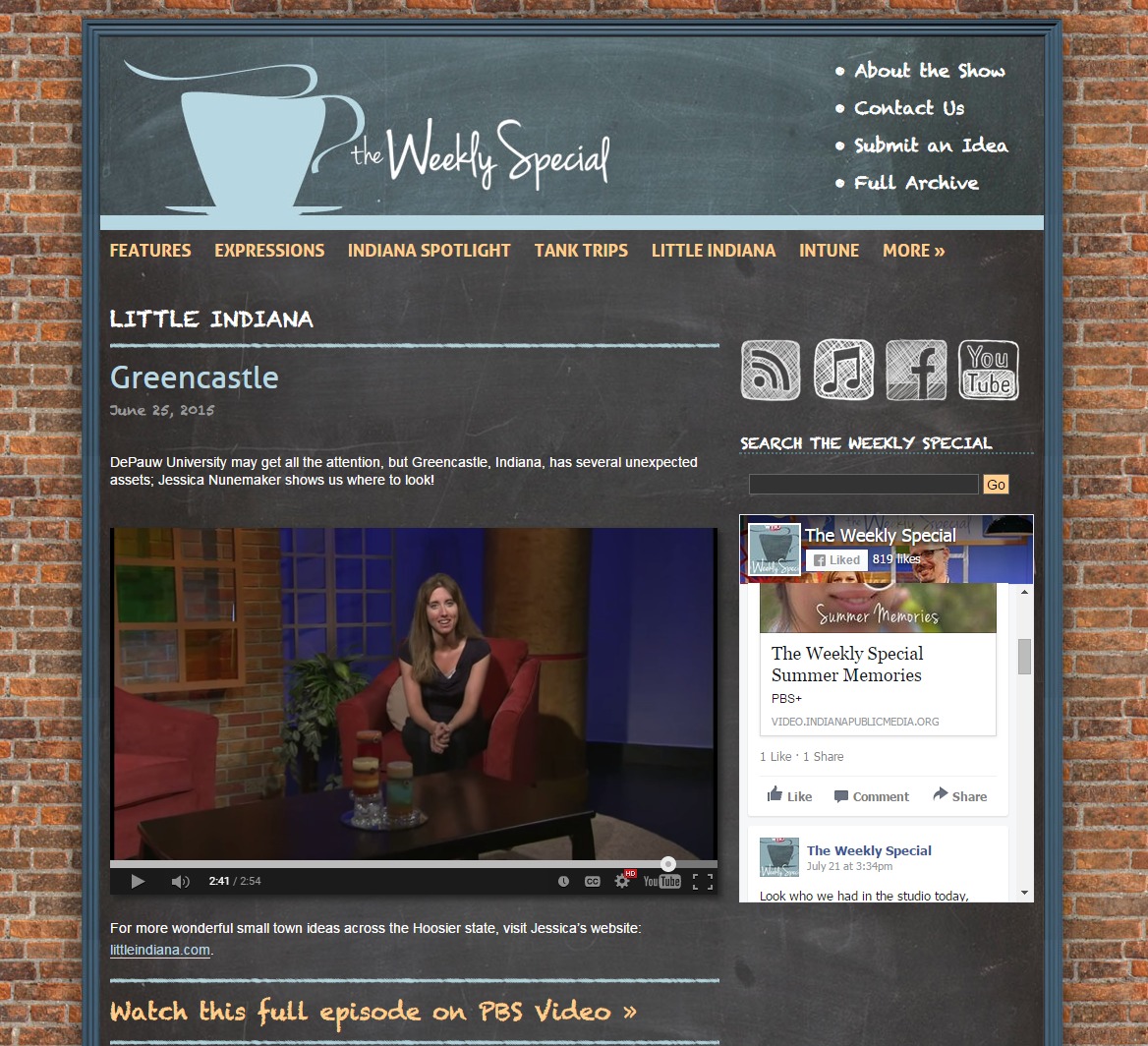 They have an awesome set-up. It’s so giant! I’m used to reading in a much smaller space, typically with my producer and my husband, Jeremiah, on the other side of the door. My producer and hubby get to chit-chat a little between takes. I prepare myself for the next reading, scanning the script I wrote, making sure I have an idea of what I am going to say, before digging in. I hate making mistakes and slowing down an already slow process. But I know I have improved. Even so, I pretty much live with my producer’s voice in my head saying, “Slow down!” I have mostly gotten over speaking too quickly while filming. Mostly.

Anyway, back to Greencastle. It’s one of those spontaneous road trips I took with just our boys. We played, ate, and settled in at one expansive bed and breakfast! I know you will enjoy visiting this area. They definitely enjoyed roaming it. Greencastle possesses a few neat shops, some great dining options, and are surrounded by other small towns with other nice shops! It’s an especially good area for bargain hunters. I know, I need to share those towns and destinations with you as well. For now, though, I hope you enjoy the show! If you do, would you please share your enjoyment of the little Indiana segment with PBS right here: http://indianapublicmedia.org/about/contact/ They would love to hear positive feedback!

Watch the little Indiana segment on Greencastle, Indiana above or view it at The Weekly Special website. Check your local guide for showtimes.