Julia Child was obsessed with it. Ancient Egyptians and Romans ate a form of it. Oh, and it found its roots as part of a celebration feast! Would you believe I am talking about mayonnaise? I love a good homemade salad dressing, like this creamy Italian salad dressing recipe.

It’s so good but it is the freshly made olive oil mayonnaise recipe (also included below) that really makes it the icing on the cake–or at least the finishing touch on a lovely salad!

If you liked my homemade Italian seasoning blend for salad dressings or if you happened to give the homemade zesty Italian dressing, a go, wait until you try this one. I’ve already made it a few times! 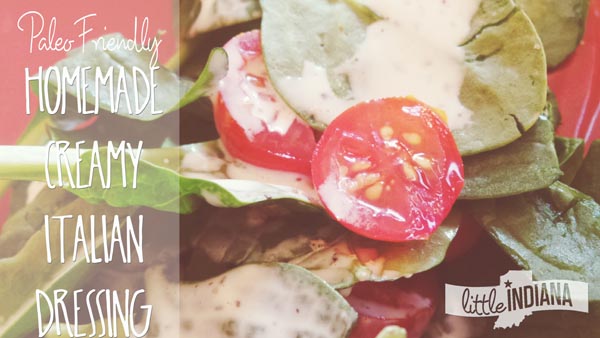 I much prefer to make my own salad dressings. They usually seem to create portions that are manageable. It is the only time we actually use up the whole thing and don’t let it sit and sit and sit on a shelf in the refrigerator. I hate wasting food, don’t you?

That’s where this recipe comes in. It begins with a simple to make olive oil mayonnaise. This stuff is so good I can’t help but lick it off the spoon! I recommend farm fresh eggs for this one. This is not a cooked egg product so you need to begin with quality, trusted eggs so as to not end up ill. Use your best judgment.

This olive oil mayonnaise recipe will keep for one week longer than the date listed on your carton of eggs. When you make it into the salad dressing, resist the urge to make a lot of it. The dressing benefits from small batches. Use it within a few days.

The key to the olive oil mayonnaise recipe is patience! It doesn’t require any weird or strange ingredients but does require that you slow down. You will need to take a good three minutes to mix the olive oil into the egg. If you zip through this part, you will end up with a mess! It is a fixable mess, but still something that can easily be avoided.

If you do move too quickly and the mixture won’t come together into a creamy, beautiful bowl of olive oil mayonnaise, then put it in a covered glass bowl in the coldest section of your refrigerator. Just don’t use anything aluminum! It will affect its coloring. Let it sit, undisturbed, for a few hours before trying again.

Although I found this recipe in the book Well Fed: Paleo Recipes for People Who Love to Eat

, it is an old recipe from The Fannie Farmer Cookbook: Anniversary

. Melissa Joulwan recommends using mayonnaise fails for things that don’t require spreading, like tuna or egg salad. I’ve included affiliate links in the images to those products below.

The Startling History of Mayonnaise

Just a short couple of centuries ago, one of our favorite condiments got its beginning–by accident. Here’s what I think is kind of neat about mayonnaise–the Romans and ancient Egyptians ate the stuff! Okay, so it wasn’t exactly the mayo that we know today, but it was a mixture of olive oil and egg. Let’s fast-forward to the year 1756.

The BBC History website article, The Art of War by Professor Daniel Moran, stated that, “In May of 1756 a French task force under the Duc de Richelieu attacked the harbour of Port Mahón on Minorca, then a pillar of British naval power in the Mediterranean.” It was a big deal that the French triumphed here. That same article shares that “victories in siege warfare were hard won.”

Madame Pompadour (1721-1764), the favorite (and highly influential) mistress of French King Louis XV, was said to have greatly praised Duc De Richelieu, referring to him as a “rising star.”

So, the chef was planning a feast to match the celebration! He realized he lacked the cream to make the usual egg and cream sauces that were popular of the day. That was probably not a wise thing to do during such a grand occasion, but I love that he shook off the stress that must have caused, and decided to improvise. Replacing the missing cream with olive oil, he developed what he then termed “Mahónnaise.” A major kitchen goof resulted in a triumph to celebrate a triumph! After all, who could resist a food item named after their big deal accomplishment?

From there, some food historians attribute French chef Marie-Antoine Carême (1784-1833) with lightening up the original recipe a bit. They believe that that is when it became the real thing! But what is the real thing?

How Stuff Works explains that mayonnaise is an emulsion. This means that you could mix the oil and vinegar (or lemon juice) together all day long and they will not combine–until you add in the egg. The egg, or rather, the lecithin of an egg (or fat molecule) acts as an emulsifier that enables items that normally will not combine, to finally just combine already. If it weren’t for the emulsifier, they would separate.

According to The Nibble, “There are various reasons given for the evolution of the word to mayonnaise—from typographical error to the old French word for egg yolk, moyen and manier, to stir or to blend.” The Oxford English Dictionary, however, is said to attribute the mistake to an 1841 cookbook misprint. Whoops! Whatever the reason for the change, I found it funny to think that such an every day sort of item had such an interesting beginning–and that no one seems to know about it!

But back to the salad dressing. After the olive oil mayo is out of the way, it’s so easy! Really, it is all so very easy. Blend it together and there you go! It’s absolute perfection. But even so, you can consider it your base, adding in other seasoning as you see fit.

If you are still daunted by the prospect of making your own mayonnaise first, view the video from Well Fed’s Melissa Joulwan below. See how easy that was? After that slow mixing is over, the salad dressing part is a breeze! Trust me, it is so worth it.

Have you ever made homemade mayonnaise? Please share your best tips or favorite add-ins below in the comments section so we may all benefit from them.

by Jessica Nunemaker
Category Eat Little Towns Recipes
It's a keeper! This recipe for Creamy Italian Salad Dressing hails from Well Fed by Melissa Joulwan. It is a Paleo style recipe yet something that even non-Paleo eaters will enjoy! Her book includes delicious variations on the salad dressing recipe. She found the recipe in Fannie Farmer's Cookbook, 1965.
Serving Size
2-4 Servings
Prep Time
5 minutes 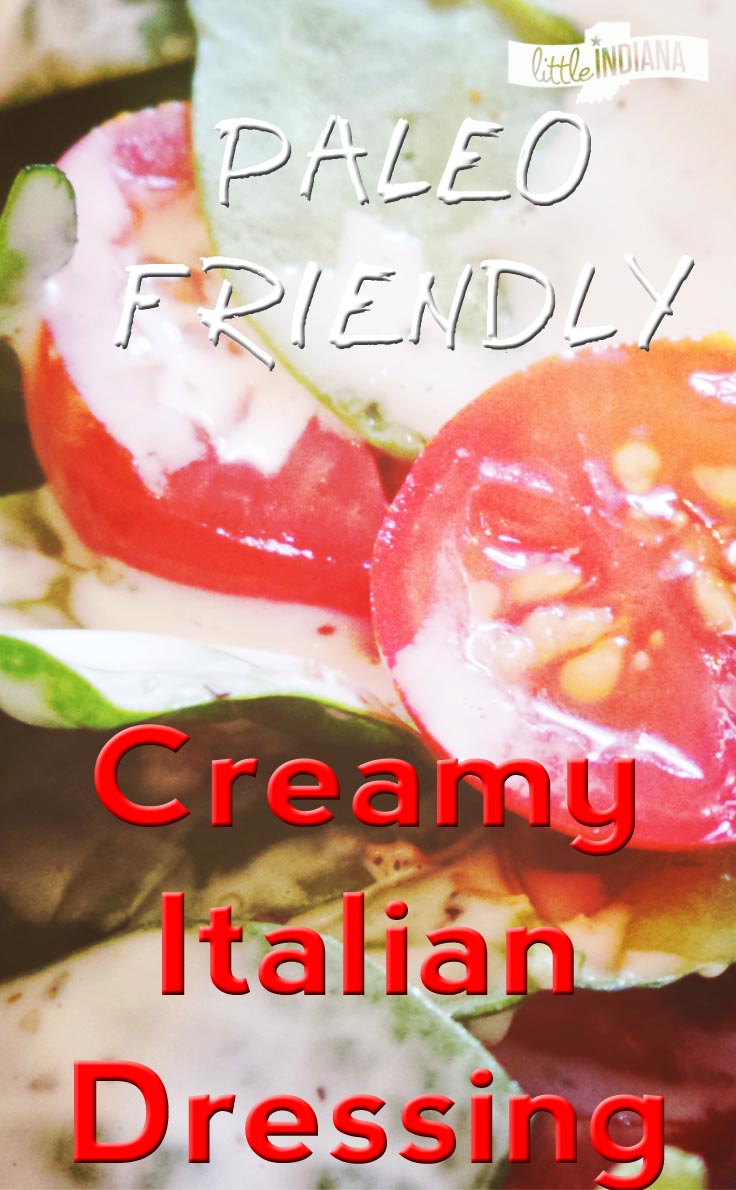 italian recipe
© 2023 Photos are the Property of little Indiana. Do Not Use Without Permission.
http://littleindiana.com/2015/08/italian-salad-dressing/

Video on How to Make Mayonnaise