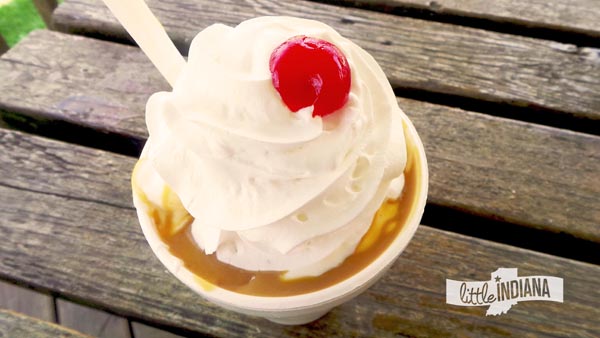 Whether you pronounce Otterbein, Indiana like “Otterbean,” “Otterbine,” or “Otterbin,” (and really, I don’t know which way is the right way!) this tiny town has a great stop you might have missed! The Otterbein Dugout is a locally-owned ice cream parlor and quick eats destination located right along Main Street.

It isn’t every day that I ask the boys if they want to take a road trip that will include a stop at two different ice cream parlors! I’m sure you could probably hear them cheering from there.

We set out. It was a gorgeous day: sun shining, clear skies, and perfectly warm. Road construction in places is a bit of a bear and not promising to be done anytime soon, unfortunately. Still, that’s when I hope to be an example to our boys, and not freak out about moving too slowly. I mostly do okay.

For some reason, this time proved to be extra tricky! Google Maps started taking me in all sorts of directions. First it had me head in the opposite direction. I was a little confused as to why cars were stopped in the middle of the road when I realized that it was parking! There were two rows of parallel parking right in the middle of the very wide main street.

I haven’t seen that in a small town downtown before. I would think it would be dangerous, people (and kids) getting in and out of cars in the middle of the main street, but then again, this is a very small town so there’s probably not a lot of main street action. Or is there? Either way, I would be interested in learning why they decided to put it in. I’m sure there’s a good story behind it.

Otterbein, #Indiana has two rows of parallel parking in the middle of Main Street! Click To Tweet 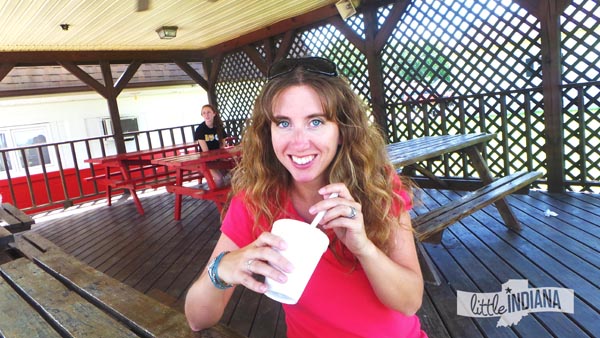 Listening to the navigator led me down a cornfield-lined road that was full of people repairing a road. That was fun. After it directed me fifteen minutes away from the actual ice cream parlor, demanding that I had arrived when, in fact, the lack of ice cream and the abundance of cornfields and tidy homes proved otherwise, I decided to pull over and consult the map.

I wasn’t at the side of the road for more than a second when a man in a big white truck rolled down his driveway and asked if I was lost. I am assuming that in this town of 1,262 people (according to the 2010 census), a stranger sticks out a bit. Or I suppose the map could have been a dead giveaway.

“Absolutely!” I responded. Would you believe what happened next? He told me he was headed in to Otterbein and that I could follow him. I only wish I had paid more attention to how he said the name of the town! But I was frazzled and didn’t catch it.

So, we followed. We drove through a part of the town that Google Maps had led us to once before. Then he waved and pointed out of his window at Otterbein Dugout. We had arrived. We weren’t alone. There were a couple of young teenage girls seated in a nice raised and covered deck. There was a steady flow of folks getting in line and a couple people returning to their vehicles. It looked like a popular place! That was a good sign! 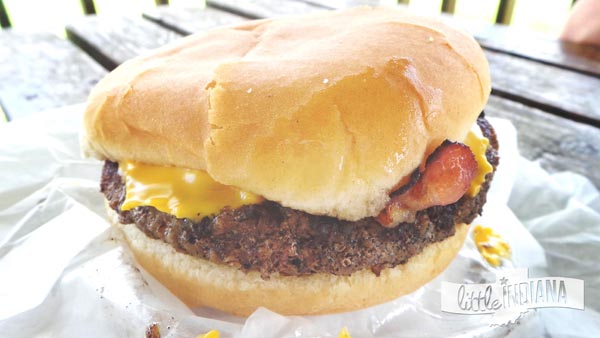 My original plan was for us to order ice cream at Otterbein Dugout and then get food from our next stop (with a small dessert) located not too far away. But that’s not how things ended up. By this point we were so hungry that we decided to get a dessert item to share.

We agreed on a peanut butter and marshmallow sundae. We’ve been on a peanut butter kick lately and that sounded excellent. Topped with whipped cream and a cherry, it really hit the spot. However, our long drive made us decide that we needed more than that. It was time for real food! No way could we wait until we arrived at our next destination.

So, the youngest requested a hot dog (of course), the oldest wanted a bacon cheeseburger (of course), and I got a pork burger. I had heard that they were fabulous and that was no lie! We shared a side of curly cheese fries. Although the fries aren’t homemade, they had a great crisp to them. 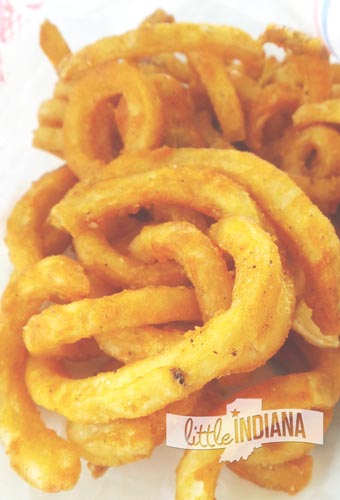 When you have been managing a big city drive-in hot dog joint for several years, it only makes sense to try to snap up the well-established ice cream shop that was put up for sale in your parents’ town! That’s exactly what happened. Two years ago, a family of Otterbein locals took over ownership of the place.

Now, mom comes in a few times a week to help out with the cooking. Her son manages the shop, just like he spent the last several years doing for someone else, but now he’s no longer at the mercy of corporate bosses. They’ve got employees to keep things moving quickly because, as small as this town might be, people come from all over for something to eat.

What’s the favorite menu item? Well, it looks like I chose well. The pork burger is it! They unanimously declared it the most popular item on their whole menu ( and their favorite as well). As for the menu? It hasn’t changed since it switched over into their capable hands. The manager stated that it’s working, it’s been working, and so they see no reason to mess with it. I like that.

They carry Boston shakes, what’s essentially a milkshake that’s topped with a sundae! I guess it’s for those days when you just can’t decide. You can combine your own flavors. It sounds good to me! They make flurries, a mix-in concoction that’s topped with whipped cream and a cherry.

If you are in a hurry, they recommend ordering the breaded tenderloin, hot dog or coney dog. They are the fastest items for them to fix that will have you in and out in no time. Yes, you can even call it in ahead of time so it is ready for pick-up! 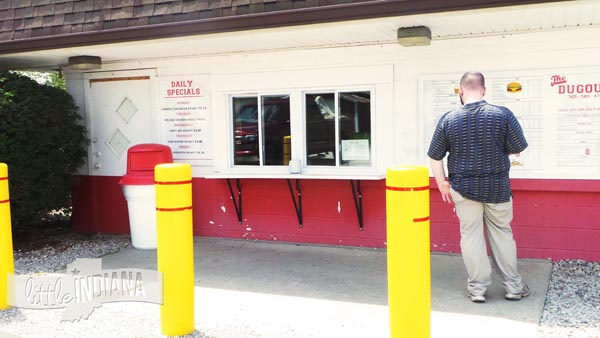 Make the trip to Otterbein Dugout in Otterbein, Indiana the next time you are in the mood for a bit of nostalgia (and really great prices). We enjoyed our time at this seasonally opened, locally owned ice cream and more parlor–and we know you will too.