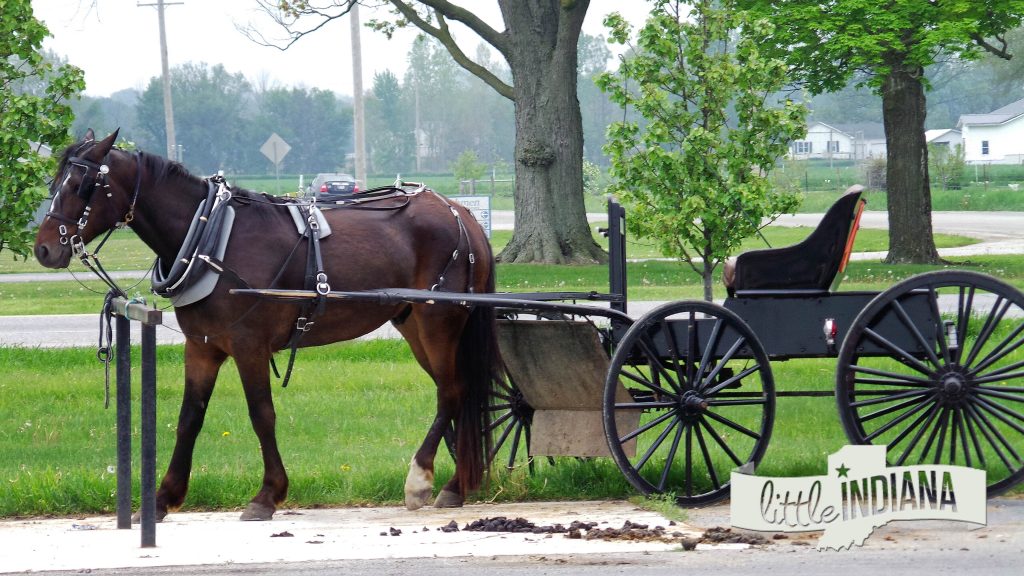 Nappanee, Indiana, as well as Bremen, Shipshewana, Goshen, Versailles,  and Middlebury, are just a few of the Indiana towns and cities that boast an Amish population. Are you surprised to learn that the Amish have settled in more than northeast Indiana? Amish settlements dot the state, almost from one end to the other.

If Amish apple dumplings, horse and buggy, or Amish Acres in Nappanee, Indiana are all you know about the Amish, it’s probably time to learn a bit more.

How the Amish Began

The Amish are believed to have started in the late 1600s. Swiss Anabaptists had a disagreement. The group splintered in two. Jacob Ammann, the minister, led one group of Swiss Brethren. Somehow, they became known as the Amish, due to Ammann’s last name.  At this time in history, religious freedom wasn’t a right.

The Amish, like other Anabaptists, were persecuted. Not baptizing infants was bad in terms of taxes and for keeping tabs on how many males you could add to your army later.

It’s no wonder they left. In the 1700s, the Amish headed toward the United States. They originally settled in Pennsylvania to escape persecution. You have to wonder if the allure of farmland was the tipping point (and why they eventually made their way to Indiana). They have since branched out. There are Amish in Maine, Florida, Texas, and Montana. 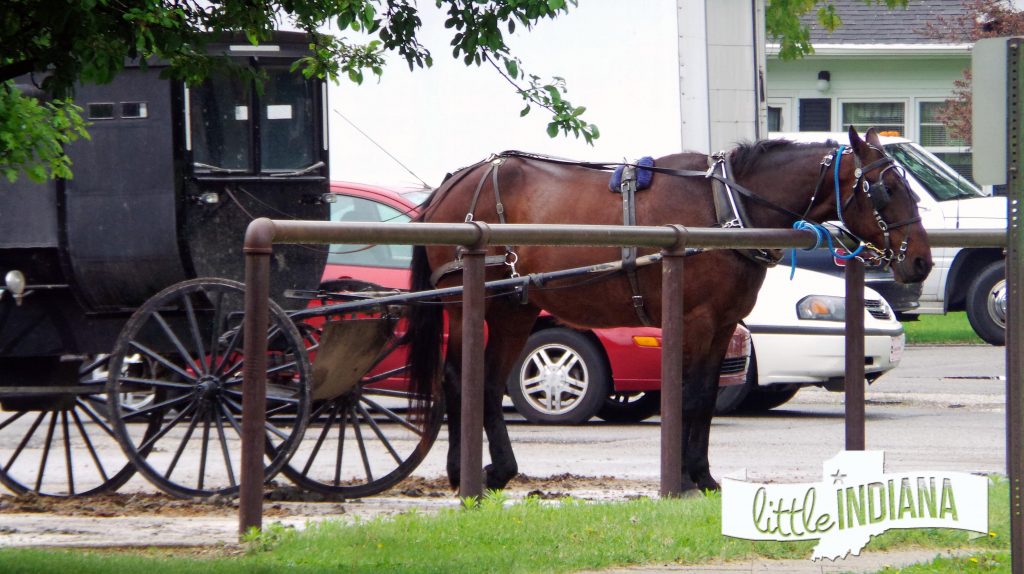 The Amish are Christians, though they don’t try to convert others or gain new members from conversion even though it occasionally happens. It is also considered a sect. Although you may think of sects as nonconformist, the Amish are anything but. Conformity is a way of life for the Old Order Amish. They follow Ordnung. A way of behaving that, although unwritten, everyone has to follow.  The Amish don’t even play musical instruments for that can lead to pride. Creative expression isn’t allowed.

Each church district, which is never allowed to become too large or the group splits, decides what is right for their settlement.

Certain types of technology, like using the Internet for a home-based business at the local public library, may be allowed. You’ve seen those tiny buildings at the end of some driveways, right? That’s the emergency phone in the case of fire or illness or death and is typically shared by those living nearby.

What technology is or isn’t allowed, what color curtains are allowed in the windows, and if it is okay to have grandchildren’s portraits are decided within these separate settlements. It’s all up to the bishop, the Amish religious leader, to decide.

Amish Hats and Clothing for Sale

More than thirty states have an Amish settlement. If you were comparing total population to the percentage of Amish, Indiana would rank #1. Yes, Indiana has the most Amish of any state when you look at it that way. In terms of total Amish, Ohio is first, followed by Pennsylvania. Combined, those three states possess almost 2/3 of the Amish.

In the 1900s, there were roughly 6,000 Amish in the United States. In 2012, according to this report, that number was just over 250,000 in the US and Canada. A shocking statement shared that a new Amish community is founded roughly every three and a half weeks.” The report went on to share that more than 60% of all the current Amish settlements had been established since 1990.

According to Amish Studies, the Amish population doubles every 18-20 years. Five to seven children are typical for an Amish family. Hard work is a way of life and, as the saying goes, “Many hands make light work.” It’s a fast-growing religious group for a reason: it’s hard for Amish to leave the community.

Instead, their numbers grow because new children are born into the sect–and stay. Amish youth go through rumspringa. It’s a period in their lives where they can drive cars, head to the movies, wear “English” clothing, and listen to “English” music.For many, it’s a tame adventure. But, it marks the moment when a teen decides if they want to be baptized and remain with the community–or risk being shunned.

Amish and the Farm 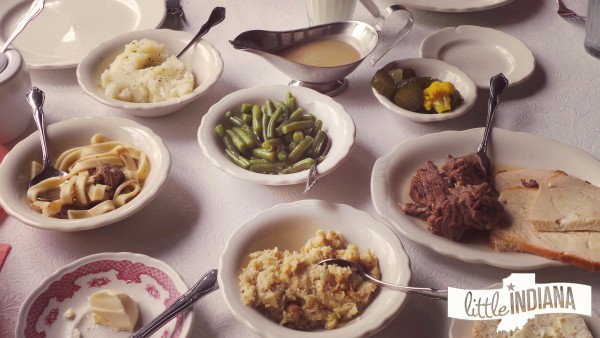 The majority of Amish are no longer farmers and many women do work outside the home based on necessity. The farm cannot support them. Maids and cooks are the usual professions. Many Amish cannot support themselves by farming alone (the Amish pay taxes too). Back in the late 1990s, more than 50% of Amish were believed to work outside the home because the farm wasn’t enough. Home businesses and/or jobs in construction or carpentry are common.

You may be shocked to learn that Amish men treat their buggy like many people do their cars: they can be rather fancy inside, at least compared to the usual Amish way, as our insider source shared. Even the front of the women’s dresses often have some sort of detail on it, faint though it may be. Of course, it isn’t exactly “fancy” to any of us, but they are still human.

If you have never been around the Old Order Amish before, here are a few things to keep in mind.

Most Old Order Amish don’t like to be photographed, period. While picture taking isn’t exactly against their religion, posing for a camera most definitely is. They consider it a “graven image” (Exodus 20:4). In some parts of Indiana, the bishop (basically the head of the Amish in that area) has become a bit more lenient. Some homes do have images of their grandchildren. While the walls aren’t plastered with faces of the “best grandkid” ever like in most “English” home, it is still there. Some Amish won’t mind being photographed just so their faces aren’t involved. Posing is definitely out. Amish children can be photographed but before you snap that shot, think how you would feel if you saw a stranger taking a picture of your son, daughter, niece, or nephew. Horses, buggy’s, farms, homes, barns, wash drying on the line–all those items are fair game. Just try to keep Amish faces out of it.

Hold Your Horses!
Slow down there, buckaroo. You’re in Amish country now. Amish are typically allowed to ride as a passenger in a car for business or a social instance, but they don’t own or drive one. Instead, they get around using a bicycle or a horse and buggy. While Amish horses are used to sharing the road, it just makes sense to avoid tailgating, speeding, or and using the car horn around Amish buggies whether you are in an Indiana town or the big city. Animals can still be unpredictable. Give yourself plenty of space “just in case.”

It’s Impolite To Stare
Yes, the sight of a sober black carriage clip-clopping down a car -filled street in a small Indiana town is jarring. Yes, the Amish dress differently, but so do I and so do you. Try to keep in mind that they are still people, too. You wouldn’t like being continually gawked at so don’t expect the Amish to jump for joy either.

If You Can’t Say Anything Nice…
Don’t play the part of the obnoxious tourist. Asking intrusive questions is not a way to make friends, no matter who you are. The Old Order Amish people are not there for your enjoyment; they are going about their daily business just like the rest of us.

Keep off the Grass
Don’t be a pest.  Unless a home advertises honey, baked goods, woodworking, and the like, don’t even think about stepping onto someone’s property, no matter how perfect a picture you think you can take. Trespassing is still trespassing no matter what your beliefs, so just don’t do it. Remember: the Amish don’t work on Sunday so you’ll need to plan ahead.