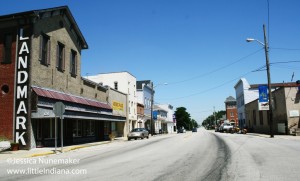 Mulberry, Indiana is such a tiny little place now but would you believe that once upon a time it was the the second largest town in Clinton county?

Furthermore, it was believed to be the wealthiest town of it’s size in the entire United States!

Of course, that was back in 1938, and I’m guessing that the slow-down and eventual end of passenger trains passing through might of had something to do with the current smaller state of Mulberry, Indiana.

I would love to travel back in time to Mulberry’s heyday when it was big stuff in Clinton County. I bet it was just a bustling little place! Even now you can see glimpses of its former beauty. There are a lot of really nice architectural details on some of the downtown buildings.

For you American Idol lovers, Amanda Overmyer was an American Idol finalist (Season 7) who also happens to be from Mulberry, Indiana. I’d love to interview her!

Things to Do in Mulberry, Indiana 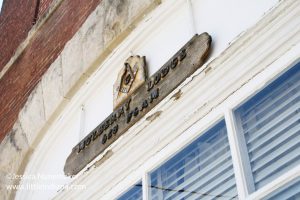 Mulberry is a quiet Indiana town. On the corner of town in a really neat building sits Mulberry Package Liquors (the owner is a really nice guy). There was even a taxidermist! I know I sound rather excited about that but it’s been awhile since I’ve seen one and it was just a little unexpected.

Down the street is a resale shop that actually had a sign on the door with the owner’s home number so you could call her if she wasn’t around and you felt like browsing.

I can’t forget what draws many people in to Mulberry from the surrounding area: Roberts’ South Fork Restaurant and Pub.

Judging from the steady flow of people in and out, they do make a special trip just for the restaurant! Roberts’ South Fork Restaurant and Pub is what brought us in, too, though more for the “restaurant” part of it than the “pub” part. 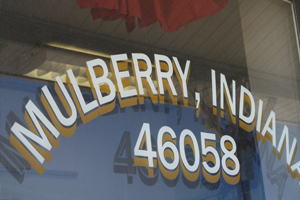 Mulberry, Indiana may not be the bustling little place that it once was but it does have a fantastic restaurant, some neat buildings, and is surely worth a walk-through at the very least.

Hey, you might just fall in love and decide to move in!