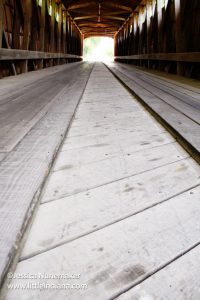 Hidden away along winding roads, up and down tree-shaded hills, lies the Lancaster (Beard) Covered Bridge in Owasco, Indiana.

This bridge with two names is in beautiful Carroll County!

There’s two signs that point the way to the bridge. Truth be told, you will wonder if you are on the right track more than once! This lovely Indiana covered bridge is way out there on curving country roads.

But, for all the wandering around–it’s absolutely worth it! 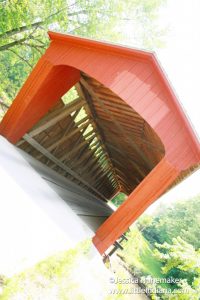 The Lancaster Covered  Bridge was built in 1872 and is still in use today. It received a bit of rebuilding here and there to keep it safe and useable in 1972, 1981, and 2006. According to the plaque, this Indiana covered bridge spans across Wildcat Creek for 128 feet.

But even refurbishing isn’t enough to keep these old bridges safe. “The bridge at Lancaster was saved during the flood of 2008 by dumping a load of gravel on the south end to keep it from washing down stream, ” shared Mark A. Smith (on my Facebook Page), Board Member of Carroll County Wabash-Erie Canal and President of Delphi Main Street Association.

What’s especially unique about this Indiana covered bridge is the cast iron abutments. There’s only a few of these old bridges that have that feature. According to Mr. Smith, Adams Mill Covered Bridge also has a cast iron approach (that had a guarantee of five years).

Although it has been a long time since been updated, the 2006 restoration project was blogged about by Dan Reitmeyer, from the family-run company CLR Incorporated, who undertook the project. It’s a neat look at how this old Indiana covered bridge was restored–and some of the surprises along the way!

The Lancaster Bridge should make your list of where to go to see a unique piece of Indiana history.

It looks great and couldn’t be in a more scenic part of the state!