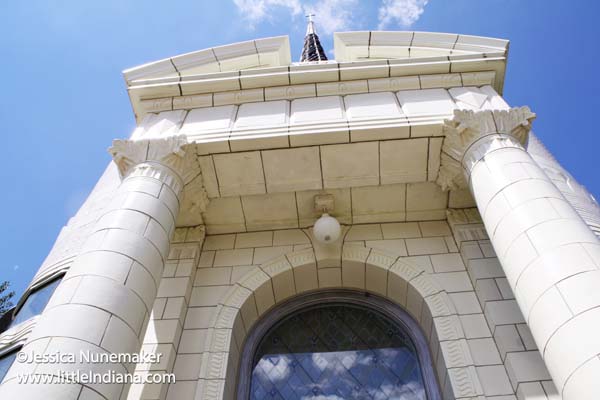 This Ripley County church is an amazing architectural feat and a lovely Art Deco example! 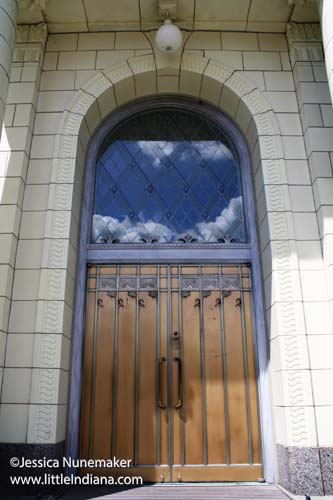 We couldn’t have picked a better day for toodling around Ripley County. Blue skies, the occasional white puffy cloud, and plenty of sun formed the perfect backdrop to this elegant Indiana church.

The Tyson Temple United Methodist Church is just amazing. With so much detail and thoughtfulness, I would find it hard to believe that there are others out there like this–or in such immaculate shape.

For those of you biblically well-versed, the sound of hammers banging was strangely absent in the construction of the Tyson Church–just as in the building of Israel’s Tabernacle. No nails were used–it is absent of wood except in the furnishings.

A Boy’s Best Friend is His Mother 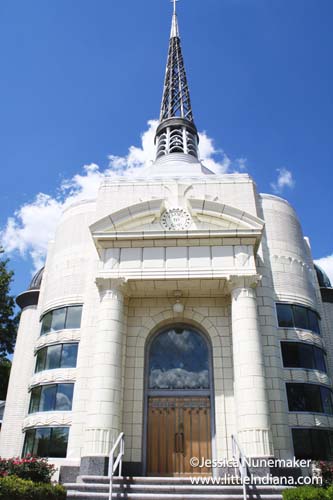 As the mom of two boys, I love to taunt hubby with that famous quote from Hitchcock’s Psycho, “A Boy’s Best Friend is His Mother,” this amazing church was dedicated to Jim’s mother.

Inside the sanctuary, we’ve heard that the ceiling is the same blue as a cloudless sky and dotted with stars to mimic the constellations. The same constellations seen on the night his mother died. Isn’t that touching?

Not just a neat historical stop, this church is an ever-lasting  tribute and is still in service to the folks of this small Indiana town today.

Imports abound from around the world: terra cota from Italy, the gold leaf on the choir loft dome and the silver leaf on the pillars are from Germany. No detail was overlooked. Yet–the pews from Ripley County prove that there’s no place like home.

It is a building of curves and roundness and downright beauty. Don’t believe me? Just look up. That’s an inverted cone, open work cast aluminum spire–the spire was one of only two in the country at the time of its construction.