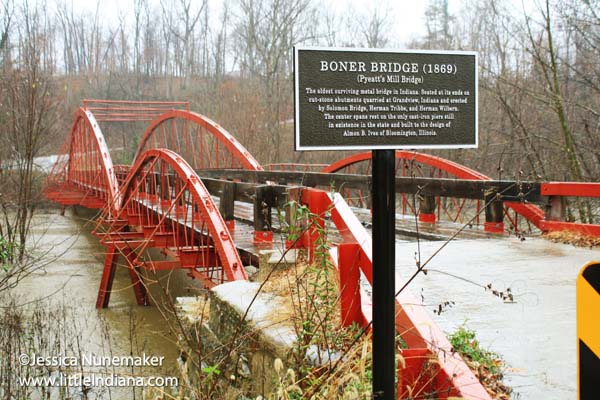 Bridges in Indiana are not always the easiest things to find as we learned with Boner Bridge (pronounced “Bonner” by some), but also called Pyeatt’s Mill Bridge, and even Warrick County Bridge No. 273 in Spencer County.

The Spencer County road, what may be considered Hatfield, Indiana seemed to lead to nowhere. But we were on the hunt for Indiana’s oldest metal bridge and we weren’t giving up. This style is one of what may be only five left in the entire country. 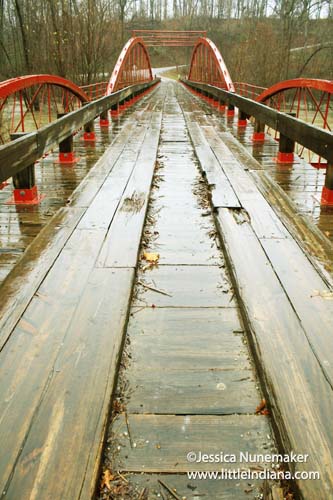 The condition of the road wasn’t the best and, to make things even more thrilling–it was pouring down rain. While a little rain doesn’t mean you need to stay at home, the intermittent rainstorm wasn’t making it easy to hop in and out of the car taking photos. But I’m a trooper. I did it anyway (even if I did get wet and muddy at a neat old cemetery on the way to the bridge).

If you’ve followed along in the travels of Little Indiana for very long, you know how great we are at getting lost. Oh, yes, we did.

We thought we were on the right track. There we were, driving along for half a mile when we realized we were actually making our way down someone’s long driveway. Company is coming! After we figured out we should have turned down the other road, we turned around, and continued on our merry way, the right way.

Driving the other way, the way we should have gone, we had angry barking dogs chase after our car. It was a scene out of Cujo, I swear. I can’t make this stuff up. Unwelcoming dogs though there were, we had a bridge to find. I only hoped it would be an incredible bridge to make up for the time we had spent trying to find the thing.

Even though it took us a bit of time, this Indiana bridge is worth it. The longest bridge of its kind in Indiana and a rare one at that, the Boner Bridge is quite a bridge. It has wood planking so it makes a great sound as you slowly roll across. Each span measures 50′ across, with the middle span reaching 160′. It’s painted red, too, so any photo in any season is bound to look great.

This Indiana bridge is an iron bowstring bridge that was built all the way back in the 1860s. Can you even imagine the way the area must have looked then? What’s more amazing is that this bridge is still in use by local traffic today. It serves to connect Warrick County and Spencer County. The three arching spans stretch gracefully across Little Pigeon River. The center span uses cast iron piers, the only ones left in the whole state of Indiana.

According to the Spencer County Tourism Website, Boner Bridge is the “longest, bowstring, wrought iron, through truss bridge structure in the state of Indiana.” The limestone abutments were quarried over in Grandview, Indiana. If anyone has more information about the old quarry, I’d be interested to know more about it. 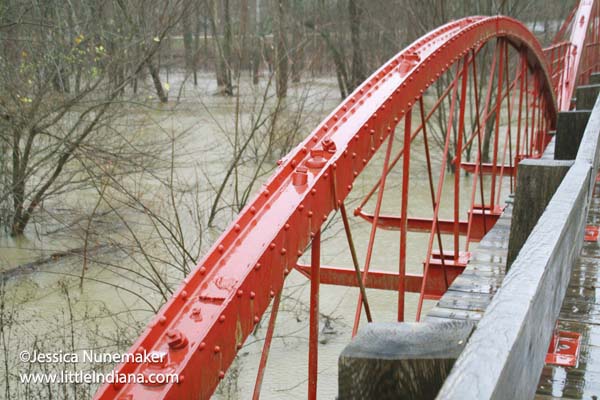 While Indiana is home to quite a few unique bridges, the old bridges are not particularly common. Many have been lost through the years due to fire, flooding, or lack of foresight.

Make your way to Spencer County and view this fantastic Indiana attraction. Let’s just hope you have better luck finding it than we did. Do make note that it is an active bridge. Since it is still in use today, you do need to keep an eye out for vehicles trying to cross the bridge. Use common sense and be respectful.