League Stadium in Huntingburg, Indiana: Site of A League of Their Own

League Stadium in Huntingburg, Indiana: Site of A League of Their Own

Make your way to League Stadium in Huntingburg, Indiana for a neat but giant leftover prop that’s still in use today!

Remember that old Tom Hanks, Gena Davis, and Madonna movie about baseball, A League of their Own? Well, that, my friend, was shot right here in this Dubois County town.

A League of Their Own at League Stadium: Huntingburg, Indiana

Huntingburg, Indiana has had film crews roaming around the town more than once and I’ll tell you why–it’s so dang cute and perfectly suited to period films!

League Stadium, built in 1894, underwent quite the process to fit the era of A League of Their Own.The field and grandstands were expanded and improved.

But today? This Indiana town stadium is fitted with period light fixtures, bleachers, and even advertising.

Look out across the well-kept field and you can’t miss the old fashioned Coca Cola and Levi’s ads–in colors that match the oranges and blues of the stadium, the Rockford Peaches colors! 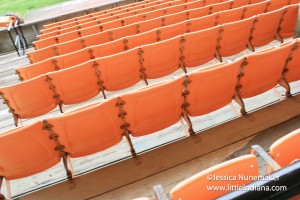 As Indiana attractions go, I thought this was the neatest thing. It’s not every day that you can walk onto the set of a movie!

So not only does it look good, but it gets its fair share of use! Would it not be really fun to catch a game? You’ve got to wonder what visitors think when they see the old-fashioned stadium! 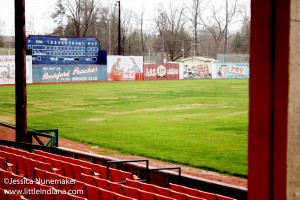 It’s free! Surrounded on one side by a rather nice playground, you can poke around the stadium and then go swing on the swings.

Go check out League Stadium in Huntingburg, Indiana and relive your favorite movie moments. But remember, “There’s no crying in baseball!”