I visited Nick’s English Hut in Bloomington, Indiana right after a long afternoon and evening of filming at the WTIU studio for PBS’ show The Weekly Special. My husband, Jeremy, and I were starving and I had one thing on my mind: fries. 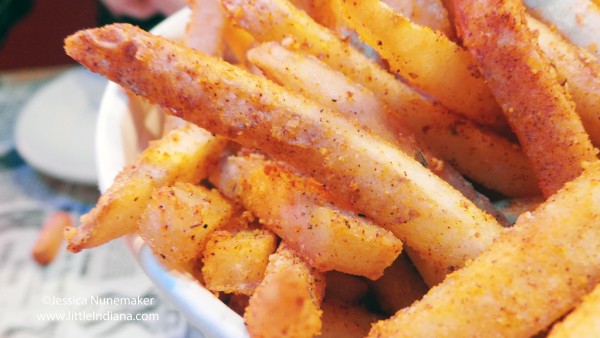 We had visited Nick’s English Hut in Bloomington, Indiana a few months before after a different PBS taping–but I was getting the flu that time! You can bet that that is the last thing you want to happen when you have a long, tiring day of voice recording after a long day of filming.

My husband thought he had the cure: a bucket of fries with a side of horseradish. Although I still ended up with the flu, I couldn’t forget those delicious fries.

So, we decided to visit again, this time, when I wasn’t sick. We ordered a bucket of French fries to share. Tossed with Romano cheese  and a special blend of seasoning, they may be served with a garlic mayonnaise sauce but we love them with a side of horseradish! We also barely make a dent in the thing. This would be a great appetizer to share with a group. 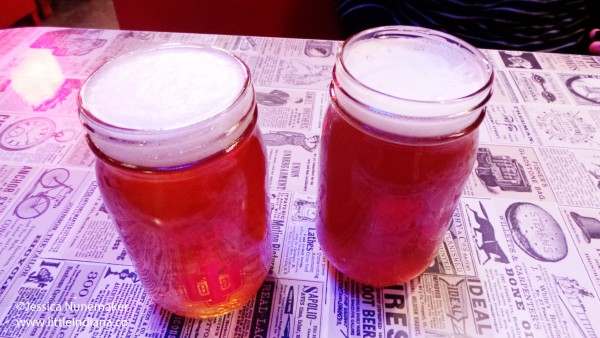 Nick’s English Hut in Bloomington, Indiana has 16 Beers, including Local Beers, on Tap.

Nick’s English Hut was named for by its owner, for it’s owner, Nick Hrisomalos (1891-1953). This Greek immigrant arrived to the US at the age of 13, with a third grade education and a strong entrepreneurial spirit. But first, he worked the Illinois steel mills. At 22, he returned home to fight in the Army. In 1918, he was drafted for service in World War I. His name was on the list for the front lines in Europe, but he came down with the Spanish flu, an illness that claimed the lives of fifty million people worldwide. He survived.

Nick opened different businesses around Bloomington until he hit on the big one: the restaurant that would outlive him. He passed away the day that Indiana University won its second NCAA basketball championship. The business has changed hands a couple of times, but it has remained a local favorite for a reason.

There’s no English food here like the name implies. Instead, you’ll find typical American fare like hamburgers, pizza, and Stromboli sandwiches. This Monroe County restaurant prides themselves on their Italian Beef Sandwiches. I’ll have to try that next time.

The Black Angus beef comes from Jasper, Indiana at a hundred year old farm fed grass and grain. My husband discovered that it makes an exceptionally good burger.  Those avoiding meat will find a Black Bean Burger and a Mushroom Burger on the menu along with a small selection of salads.

The menu may have changed a bit since it opened in 1927, but some things stay the same: you can always count on good food and great atmosphere at Nick’s English Hut. For wheelchair accessibility, please call ahead for back alley access.

Menus and prices are subject to change. If you have your heart set on a particular menu item, do call before heading out to make sure they still carry it.

Follow Nick’s English Hut on Facebook so you can stay on top of the latest special events, food specials, and then some. You can also find them on Twitter.

Don’t just live in the city, explore it! I’m Jessica Nunemaker and THIS is Big City, Little Indiana.