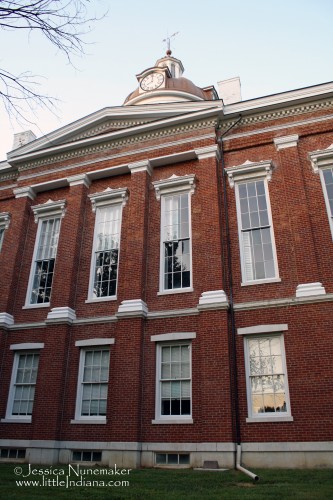 A visit to the Switzerland County Courthouse in Vevay, Indiana is a fantastic peek into the past. You can tell that it is a very old courthouse.

So often, old is ripped down to make way for the new. But somehow, that hasn’t happened to this gorgeous Indiana courthouse. Would you believe the courtroom contains the original furnishings? Amazing, right?

Still, when it came to residential buildings, it stopped at mansions. The colonial style was more popular for the typical family home.

Although they aren’t exactly close to Indiana, the information remains the same when you’re talking architecture. The Pennsylvania Historical and Museum Commission had great information to share about Classic Revival style (as show listed below). Common features to the style, and what might just be found on the Switzerland County Courthouse, include:

The Switzerland County Courthouse certainly has them. The square building and large windows are terrifically set off with the graceful pillars. It’s a striking building. The roof? Well, that’s just as attractive. There’s a dome complete with clock faces on each side up there. Our boys were impressed.

If you look to the southwest side of the courthouse, you’ll find a tidy Veteran’s Memorial. 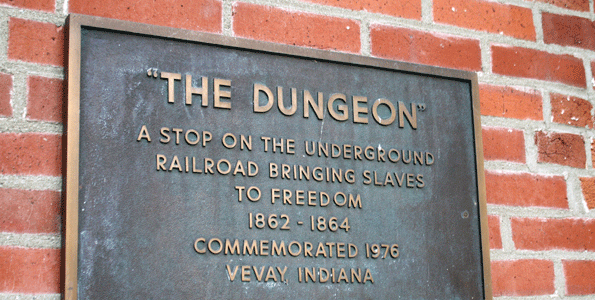 There’s also a feature that lies just outside the Switzerland County Courthouse that may elicit a chuckle or two. It’s a feature that I have yet to see on any other courthouse property–and I’ve visited plenty.

For you see, dear reader, there’s not only a courthouse on the property but also a six-sided privy.

In other words, there is an outhouse capable of seating six people on the courthouse property. I guess it was such a popular place they needed plenty of room. There are separate doors.

But don’t worry–inside you will discover all the modern conveniences. Keep strolling around the carefully landscaped grounds and you’ll notice a nice gazebo, loads of very big trees, and a cannon! 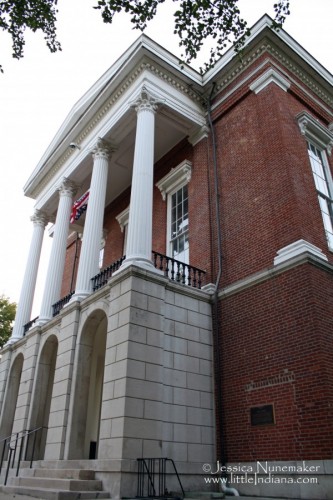 All of this PLUS this Switzerland County building was a stop on the Underground Railroad. You’ll find a tasteful plaque on the building that mentions this deed.

Switzerland County in general had a documented hand in the anti-slavery movement dating back to 1825. The location of the town on the Ohio River assisted in helping to relocate the runaway slaves ever farther north. Area homes and churches were also a part of the life-saving mission.

History doesn’t need to be boring. In fact, you could say it is usually rather interesting, especially when you get to see it in real life–and aren’t just reading it from a book in a classroom.

The Switzerland County Courthouse in Vevay, Indiana is a beautiful building. Stop by and appreciate the graceful form that has lasted 150 years!