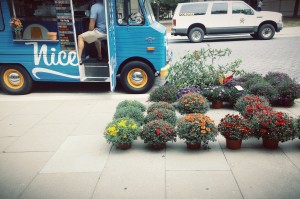 Nicey Treat serves all-natural, handmade frozen treats at a Statehouse Market earlier this year. Nicey Treat is one of more than 50 food trucks in Indianapolis.

It was Thursday, it was October, and the weekly Statehouse Market in Indianapolis, Indiana had turned the plaza into a melee of colors, sounds, people, and produce. There were red tomatoes. Purple mums. The dull roar of chatter and bargaining. There were smells, too, and it was the smells I was most obsessed with: the scents of curry and Cajun, of barbecue and southern comfort.

They twisted into the air, causing my stomach to rumble and my mouth to water. How am I going to choose? There was no way I could order from one food truck and one food truck only. There were just too many trucks to choose from, and so many delicious, delicious options. 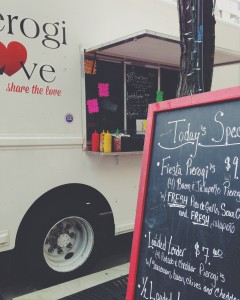 The Indianapolis food truck industry started in 2010 with just one food truck. In the last few years, however, the industry has flourished.

Due in part to favorable city regulations–as well as an ever-hungry crowd–there are more than 50 trucks that roam and serve Circle City streets. Indy’s food trucks have even been mentioned alongside those in Portland and Austin–cities with renowned mobile food industries.

It is unsurprising, then, that Indy was included on Mobile Cuisine’s list of “Top 20 U.S. Cities to Open a Food Truck.” The article, published in November, awarded Indy the No. 5 spot, and took into consideration the city’s population and demographics, as well as the presence of a food truck organization. Also factored into the rating were existing food truck laws, which, as mentioned earlier, aid Indy’s growing food truck industry. 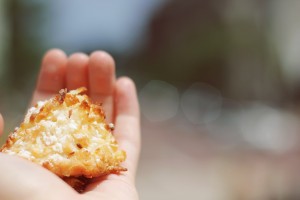 Coconut macaroons are just one of Duos’ desert options. Duos uses local ingredients in its changing menu, which is rich with vegetarian and gluten-free options.

There’s the creamy macaroni and cheese from Mac Genie, the kind with the bacon bits and the ranch dressing. A little crunchy, a little cheesy, a little tangy–perfect for a summer afternoon. And for gloomy, rainy days, there’s soup from Duos, which offers a variety of vegetarian and gluten-free options. Furthermore, if you adhere to the Paleo diet, are in the mood for po’ boys, or just want a little something to satisfy your sweet tooth, you can always visit Caveman Truck, Some of This Some of That, or The Flying Cupcake, respectively. 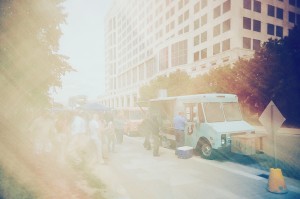 Sure, there may be more than four dozen food trucks patrolling the streets, but … how, exactly, do you find them? Thankfully, social media makes tracking a particular food truck much easier. Most food trucks have their own website, and often sport their own Twitter account as well. Furthermore, food truck locators provided by Around Indy and the Indy Food Truck Alliance help hungry folks find what’s nearby. (The Alliance also has a regularly updated Twitter account.)

Personally, I find myself frequenting the corners of Ohio and Illinois, Illinois and Market, and Monument Circle itself. Don’t be surprised to see a fleet of food trucks at Keystone at the Crossing, either. And don’t forget special events–you can find food trucks at farmers markets, at the Indie Arts & Vintage Marketplace, at outdoor concerts, and at Clustertruck.

Georgia Street often comes alive with various activities and trucks as well. Better yet, if you’re also in the mood for a pint, head over to Irvington, where Black Acre Brewery partners with a food truck each Monday.

It’s Not Just About the Food 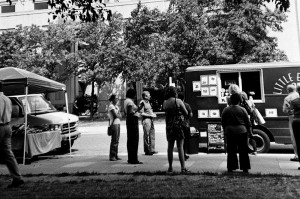 It’s not just about the food–it’s about the people behind it, too. The people who continually cook and serve meals that make me drool like Homer Simpson. The people who recognize me, who see my face at their window time and time again, and know just what I like. “Here, let me give you some okra, too,” they offer. And they make suggestions, ask questions.

They get to know their customers. They appreciate every order, and want each patron to know that they take pride in “homemade” meals and locally-sourced produce. So it’s not just a meal–it’s a business. It’s an industry. And with so many food trucks, with so many options, I doubt I’ll ever go hungry.