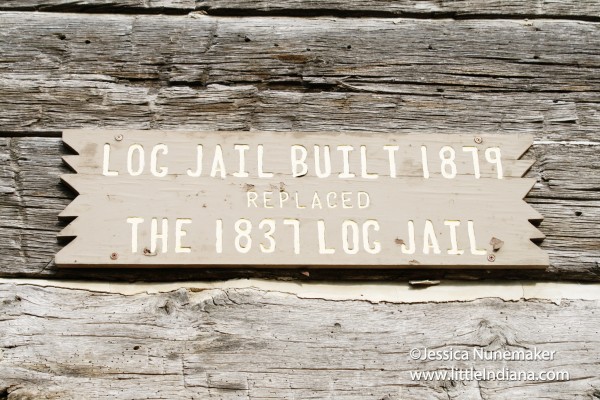 The 1879 Log Jail in Nashville, Indiana is an easy jaunt from the downtown. Like most of the destinations in this town, you can easily walk to it. The jail is also a very quick trip into the past. It all began in 1839.

According to the Brown County History Center website, “The last sentence of an order of the Brown County Commissioners in 1837 for construction of a jail stated: ‘Build her good and solid.'” They certainly took that advice to heart. The original 1839 Nashville, Indiana jail was a built to be heavy duty. 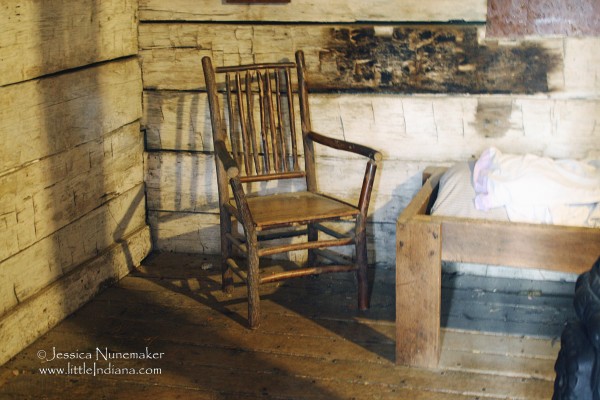 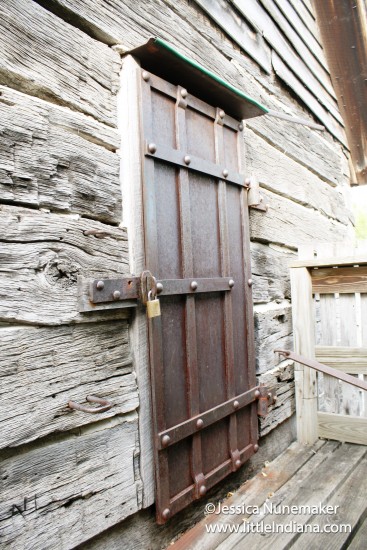 This was obviously not a jail where comfort and mental grip was taken into consideration. Once a criminal was placed inside, there was little chance of escape, owing to the double layer of 18″ thick walls, and the entrance in through the roof via rope. No kidding. It began with an outside stairway. The prisoner would be led up the steps to the door in the upstairs floor. They would then use a rope ladder to get in. Then, the rope would be taken away, effectively preventing any chance of escape.

It does make you wonder as to what sort of crimes these people were committing where you absolutely did not want them to get away! Petty theft, sure, it would be a bummer to have an escapee, but it probably wouldn’t warrant a jail of this kind. Murder, however, I think that would be a different story. But in this small town back in the 1800s? I just don’t know.

The elements made their make on the original log construction. A new jail was in order. The new jail constructed in 1879 used two layers of walls, extra thick, and a foot apart from each other. As for the space, it’s small. Dark. I can’t imagine spending time closed up in there. Anyone with even a hint of claustrophobia would probably feel the walls closing in that much more. It’s not even remotely spacious. I think back to the days before DNA testing. Was anyone locked away in this jail for a crime that they didn’t commit?

Women didn’t have it any better. This time, a second story became the site of the women’s jail. It, too, is a very small space, as you can probably image. At the time of my first visit, I hadn’t been able to peek inside, the doors were locked. The second time around, I was able to get in, walk around, and consider the space. What sort of crimes would lead to a woman being imprisoned? Were there many women who were locked in the old jail? What for?

I did notice that the doorway was very short. Although a woman, who happened to be in the room where I was, stated that people were shorter then, I don’t think that they were that much shorter! I wondered if it was used as a way to keep someone from being able to rush the door and escape. Anyone know the real story on that? I’d love to hear your thoughts about it in the comments section below. While you are add it, do add this attraction to your Indiana travel plan.