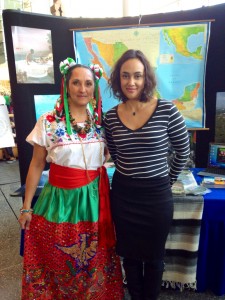 The IUPUI International Festival in Indianapolis, Indiana features food and entertainment from countries around the globe.

In its 10th year, the festival is an annual celebration of cultural diversity and international community at the IUPUI Campus Center.

When I arrived on the Central Indiana campus I noticed the colorful world flags on display. The collection, curated by the International Center, includes flags of all U.N.-recognized member states. I stopped at diversity-themed display booths showcasing a variety of informational literature, maps, and artifacts.

I then waited in a short line for a free sample of Chicken Kofta and Lentil Stew which included chicken, onion, and fresh ginger; a traditional meal served in Saudi Arabia. The well-seasoned and tender potato also added to the flavor. It was mouth-watering and as I walked away I craved more.

Ethnic foods from four other countries were provided by IUPUI Food Service: Nikujaga from Japan; Braised Mushrooms from China; Pozole from Mexico; and Basboosa from the Middle East.

Items and Cuisine from Around the World 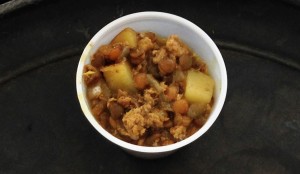 Chicken Kofta and Lentil Stew at the International Festival at IUPUI in Indianapolis, Indiana

I scanned the informational booths on Peace Corps opportunities and resources on traveling abroad. The festival is a chance to learn about how to get involved internationally.

A festival isn’t complete without shopping and I’m not one to leave empty-handed. I admired the clothing for sale as well as jewelry and other accessories representing each participating country. When traveling abroad, I love to bring back trinkets, and what better way than to support those artisans who make handmade items at the marketplace. I bought a necklace.

Other festival events included a best dressed contest, where faculty, students, staff and community members can vote for the best costume and win a $25 gift card from the IUPUI Barnes & Noble Bookstore by wearing clothing from their home country or a place visited. 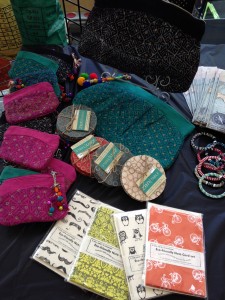 Supporting artisans from around the world at the International Festival at IUPUI in Indianapolis, Indiana

Save the date now for the 11th annual IUPUI International Festival!