On June 27, 431 Gallery: Art and Impact—an exhibit about the influence of art in Indianapolis in the 1980s—opens at the Indiana State Museum. The exhibit offers a window into the beginnings of the contemporary art scene in Indianapolis, and highlights one of the first downtown galleries. 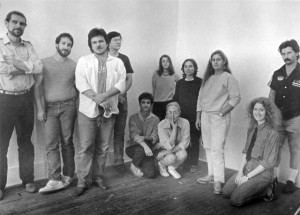 431 Gallery: Art and Impact will feature art from some of the original members of 431 Gallery. The exhibit will highlight the development of contemporary art in Indianapolis.

In 1984, 17 artists formed a collective and opened a gallery at 431 Massachusetts Ave. The 431 Gallery, as it was called, allowed artists to showcase innovative paintings, sculptures and photographs. “[It] brought an alternative to commercial galleries and was one of the original galleries operating on Massachusetts Avenue in downtown Indianapolis from 1984 to 1993,” said Curator of Fine Arts Mark Ruschman in a press release. “During this time period, Mass Ave was considered Indianapolis’ first arts district and was integral in driving visitation downtown.”

Before the colloquially-known “Mass Ave” was a bustling cultural district, and before it was host to cutting-edge galleries, it was an area in need of revitalization, a “skid row” of sorts. By the early 1980s, vacant storefronts were being transformed, and retail shops, restaurants and galleries began to appear. Artists who had previously struggled to find places to display their art were now part of the “downtown renaissance.”

The exhibit, which continues through Sept. 14, will spotlight two- and three-dimensional art from some of the original members of 431 Gallery, including Bill Adkins, Anita Giddings, Larry Kline, Carla Knopp, Steve Paddock and Ed Sanders. In addition to 431 Gallery: Art and Impact, a posthumous, solo exhibition of Sanders’ work, Ed Sanders/Life and Art, will be on display at Eskenazi Hall at Herron School of Art and Design.

“This is the first time Herron and the Indiana State Museum have partnered on a major program and we’re excited about it,” said Ruschman. “Since the 431 Co-op Gallery was founded by former Herron students and Ed Sanders was a founding member, the collaboration … makes perfect sense.” For more information about the collaboration, and for a preview of some of the featured art, watch the news release. 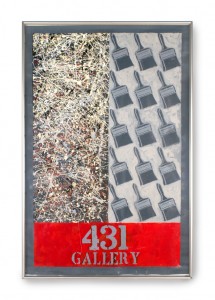 A panel discussion about 431 Gallery’s influence on art in central Indiana will be held from 10 a.m. to noon, June 28, at the Indiana State Museum.

Curious to learn more? Attend one of the panel discussions on Saturday, June 28. The first discussion, titled 431 Gallery, will be held from 10 a.m. to noon in the Dean and Barbara White Auditorium at the Indiana State Museum. This discussion will focus on the gallery’s impact on art in central Indiana. The second discussion, titled Our Journey: 30 Years of Art, will be held from 1 to 2 p.m. in the Basile Auditorium at Herron School of Art and Design. Both discussions are free and open to the public, but reservations are required. To reserve a seat, contact the Indiana State Museum at 317.232.1637.