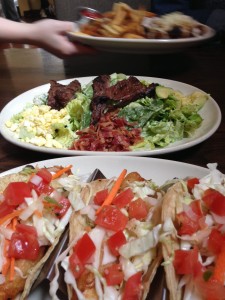 Pikk’s Tavern in Valparaiso, Indiana serves something for everyone.

Pikk’s Tavern in Valparaiso, Indiana is a popular downtown spot for people looking for steak, seafood, pasta and more.

Although it has “tavern” in its name, families often dine there along with the folks sitting at the bar.

I have enjoyed Pikk’s on several occasions over the years, and often gravitate toward the flavorful salmon cooked on a cedar plank. During my most recent visit, which I made with my wife and her friend, I opted to try something I hadn’t had before – the fish tacos.

The special sauce and fresh slaw complimented the fish perfectly. My wife ordered a large salad with bacon and avocado, onto which she added steak (the thing Pikk’s is probably most known for). Her friend got the barbecued pork. They both raved about their selections. 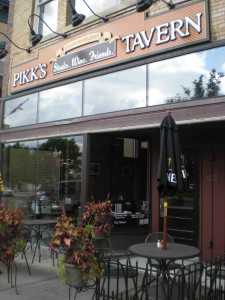 For dessert, the three of us split two desserts – the key lime pie and the creme brulee with berries. My wife and I often get creme brulee wherever we dine (I like the crisp top, while my wife likes the smooth and creamy part that lies underneath). My wife’s friend is a pie person.

Imagine our surprise when the creme brulee came out in a large soup bowl – easily the twice the size of most restaurant’s creme brulee. And it was delectable. The pie was awesome, too.

The little touches make the Pikk’s experience special, like the metal tins that decorate the shelf above the bar and the small metal tins in which each diner’s bill is delivered. For an extra special experience, get a table by the window and watch the world pass by on Valparaiso’s main drag – Lincolnway. 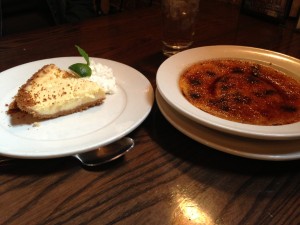 The meals are great, but save room for dessert at Pikk’s Tavern in Valparaiso.

This Porter County restaurant also features outdoor dining and a lower level for dining or events, and Pikk’s is one of the restaurants that participates in “Eat Up Wine Down” on the first Thursday of each month.

Diners who come on the first Thursday get $5 specials on meals, desserts and drinks. Be sure to order Pikk’s mini-burgers and guacamole made fresh tableside.

Speaking of their burgers, their full-size tavern burgers made the cut to participate in the Burger Wars bracket contest sponsored by Indiana Dunes Tourism.

Don’t just live in the city–Explore it! THIS is Big City, little Indiana.