Michael Franti and Spearhead is not your typical band who tours. Not only do they arrive with a set of songs and inspiring stories to tell, but they also bring a yoga instructor and a yoga mat or two.

The Soulshine Tour promises “one hour acoustic yoga jam before concert doors open,” and I was able to experience it firsthand. 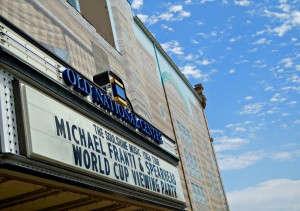 Upon arriving to Old National Centre in Indianapolis on Sunday, July 13,  I was surprised to see a line of yoga pants-wearing, yoga mat-carrying people wrapped around the building waiting to get in. Expecting it to be a smaller event, I began to wonder what I had gotten myself into. My husband, who decided to tag along, was feeling just as apprehensive.

Despite the long line, we got into the venue quickly, settling into our chosen spots in the Egyptian Room at Old National Centre. I spread out my yoga mat and sat down, ready for wherever this new adventure would take me.

Having only taken yoga classes at my small suburban gym, I knew that it was good for me to step out of my comfort zone, and step out of my comfort zone I did. Our class was greeted by hip-hop/reggae singer Michael Franti himself, singing one of his popular songs along with his band, Spearhead. Believing that it helps participants connect and unite as one, the band encouraged us to dance, clap, and jump around before the yoga class officially began.

The mini-concert helped set the mood for the hour-long practice. After the song was over, our yoga instructor Allie Purdy made her way onto the stage.

Yoga Unites the City of Indianapolis

The class itself was very calming, created for all ages and abilities. We started with a few sun salutations, and once comfortable with Allie’s teaching style, we were invited to choose a partner and move into partner yoga. The poses helped to build strength and balance, while connecting us to one another.

While it might sound intimidating, my first-timer husband was able to keep up the whole time. We both enjoyed the new experience!

Soulshine Yoga is more than a group fitness class — it supports the arts, teaches the importance of physical and mental well-being, and unites those from all different backgrounds and beliefs. 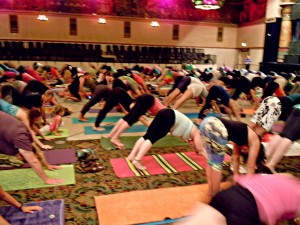 If you’d like to experience The Soulshine Music and Yoga Tour yourself, you have the chance to do so in several other states, as it’s traveling to a total of 35 locations.

If you don’t want to travel far to get your yoga fix, there are a number of yoga studios in Indianapolis that offer classes (live music from Michael Franti not included).