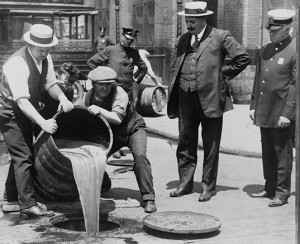 A new exhibition at the Indiana State Museum examines Prohibition, from its start in 1920 by the 18th Amendment, to its repeal in 1933 by the 21st Amendment. (Photo provided by the Library of Congress.)

A new exhibition at the Indiana State Museum in Indianapolis shares the stories of bootleggers and temperance lobbyists, flappers and suffragists. The exhibition, American Spirits: The Rise and Fall of Prohibition, opens Saturday, Sept. 20.

The exhibit’s timeline begins with the dawn of the temperance movement in the early 1800s, spans across the Roaring ’20s and stretches into the Great Depression, when the 18th Amendment was repealed.

American Spirits: The Rise and Fall of Prohibition Opens at the Indiana State Museum in Indianapolis

In a video released by the Indiana State Museum, Susannah Koerber, senior vice president of collections and interpretation, said American Spirits ” … is the first comprehensive exhibition about America’s most colorful and complex constitutional hiccup.”

The 5,000-square-foot exhibition, which was created by the National Constitution Center and curated by Daniel Okrent, author of Last Call: The Rise and Fall of Prohibition, features more than 100 rare artifacts. The exhibition also includes recreated environments.

Visitors will be able to hear (and deliver) temperance speeches at a church, for example, learn the Charleston at a speakeasy or see how they measure up against notorious gangsters, including Al Capone. Other interactive installations include a carnival-inspired “amendment machine,” which helps explain the legal complexities behind the 18th Amendment.

Through these interactive exhibits, as well as photographs, music and film, guests visiting the exhibition will learn how America endured a radical rise in crime, corruption and cynicism.

A Look at Indiana’s Attitude Toward Prohibition 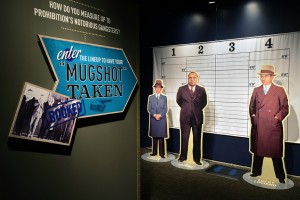 Guests who visit the exhibition can deliver — much like Billy Sunday — a temperance speech at a recreated church. They can also see how they measure up against the era’s most notorious gangsters.

In addition to America’s reaction to Prohibition, the exhibition also explores influential individuals in Indiana. One such individual is May Wright Sewall, a suffragist who was a charter member of the Art Association of Indianapolis, the Propylaeum and the Contemporary Club. Sewall also founded the Girls’ Classical School in Indianapolis, and was elected president of the National Council of Women in 1897 and of the International Council of Women in 1899.

Grace Julian Clarke was also at the forefront of women’s suffrage in Indiana. She was the first president of the Legislative Council of Indiana Women and, for 18 years, she wrote a weekly column for The Indianapolis Star. And then there’s Billy Sunday, a late-1800s professional baseball player who became an evangelical Christian.

Sunday moved his family to Indiana in 1911 and played a significant role in the adoption of the 18th Amendment. In one of his most famous sermons, Sunday declared himself the “sworn, eternal and uncompromising enemy of the liquor traffic.” Even after the repeal of the 18th Amendment in 1933, Sunday called for its reintroduction. 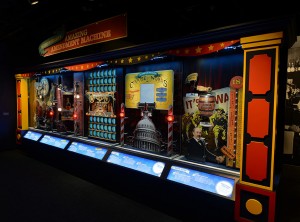 “Wayne Wheeler’s Amazing Amendment Machine” is just one of the many interactive installations in the exhibition.

American Spirits, which examines both the “dry” and “wet” sides of Prohibition, opens on Saturday, Sept. 20 and runs through Feb. 15. Members of the Indiana State Museum, however, can preview the exhibition on Friday, Sept. 19. The museum is located at 650 W. Washington St. in Indianapolis, and is open from 10 a.m. to 5 p.m.

Tickets for American Spirits are $13 for adults, $12 for seniors and college students and $8.50 for children ages 12 and under. Further information about the exhibition and online ticket sales can be found on the museum’s website.