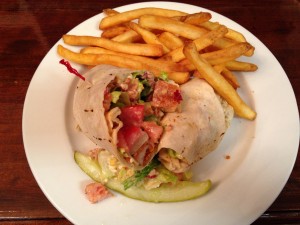 If you find yourself on the west side of Indianapolis and are looking for a great place to eat, stop in at The Library Restaurant & Pub.

The meal and the ambiance won’t disappoint.

The Library Restaurant is housed in a chateau-like building because in the late 70’s it was built as a French restaurant for the owner Lou Jenn. It was his dream to own a restaurant which it was called Mon Reve (which means my dream in French).

Eight years ago, the building and restaurant were purchased by Al and Mary Wei. The family reopened the building and brought much of the original splendor back to life. The German crystal chandeliers and other details are original to the Mon Reve. For the last eight years they have slowly been opening and creating new rooms and enhancing the building for guests. 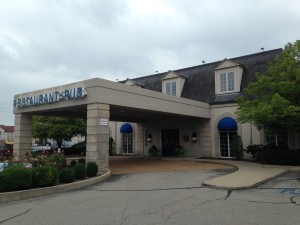 The Wei’s wanted to keep the original French atmosphere of the restaurant as well as make it fun for guests.

Original oil paintings were created that are copies of famous oils during Napoleon’s reign. In some of these paintings, they have made some light hearted changes because Napoleon also had changes to the originals to make him seem like a huge success wherever he conquered. An example is Napoleon holding a martini in the picture of him riding the grand steed over the Alps.

There are plenty of books stacked high atop a bookshelf when you walk in adding to the relaxing atmosphere.

The Food at The Library 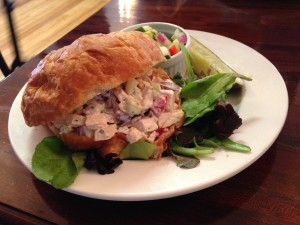 The specialty is prime rib which they slow roast overnight every night (only available Tuesday – Saturday). The restaurant serves it with a house-made ruby port au jus and creamy horseradish sauce.

The stuffed salmon is a personal favorite and so are the steaks, especially the prime rib and the rib eye. Chef John McKenzie who joined the team two years ago also makes a daily special in the evenings.

I ordered the Buffalo Chicken Wrap which was a buffalo style fried chicken with bacon, lettuce, tomato, and bleu cheese dressing and the French Onion soup was delicious, too. My friend ordered the Hawaiian Steakburger which was a charbroiled steakburger on a Kaiser bun with ham, Swiss cheese, grilled pineapple, and mango sauce. 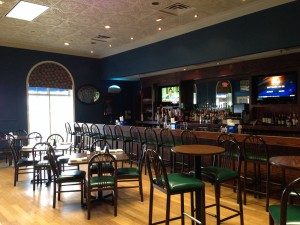 Their Experience Spirit’s Event is on October 24th and they are asking our guests to come in costume. For a listing of their events go to the website at the link below.