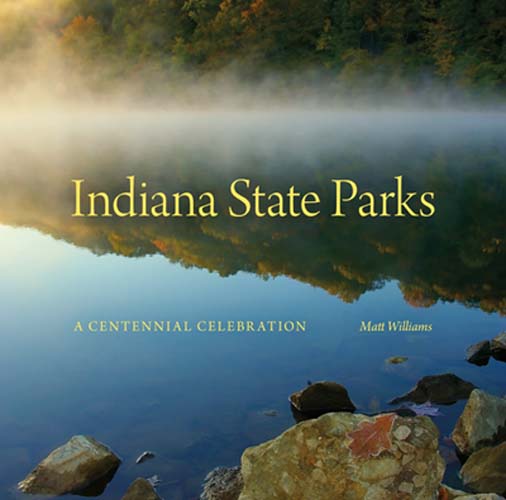 It’s a joy to read through a book for a book review when it is something like Indiana State Parks by Matt Williams. What a wonderful reminder as to the natural beauty of Indiana!

For way too long, people outside of the state (and perhaps those who never venture past the northern half) forget that Indiana is more than farming fields. This book will not only showcase our state, it might just provide you and yours with the motivation to make use of our gorgeous state parks.

It is a timely release. This is the centennial celebration of our state park system! Indiana was busy celebrating its 100th birthday back in 1916. An Indianapolis businessman, Colonel Richard Lieber (1869-1944) had his hand in the beginning of our parks system in a major way. Born in Germany, his wealthy parents wanted him to learn English. So, off he went in 1891, joining two uncles already in Indianapolis. He got a job at a paper, married, and found his true calling after a visit to Yosemite National Park and the Rocky Mountains in 1900.

Seeing the way other state’s had already preserved portions of land for public enjoyment sparked Lieber’s interest in conservation. He became a delegate to the conservation conference at the White House hosted by President Theodore Roosevelt. Putting his newspaper background to good use, he penned articles of conservation. At the Fourth National Conservation Congress, Lieber met Woodrow Wilson, and they became partners in conservation efforts.

Lieber wanted more for Indiana. After encouraging the governor to begin a State Parks Committee, with Lieber as chairman, the acquisition of property began! The new state parks would be a gift for the people of Indiana to celebrate the state’s big 100 year birthday.

McCormick’s Creek became the first state park, with Turkey Run State Park soon to follow. It did not use any state funds. The story is the Lieber was fantastic about getting wealthy folks to buy up park areas and then donate them for use as a state park. Brilliant!

This coffee table book is full of gorgeous full-color images. There are almost 200 colorful images alone to make a hefty 216 page book highlighting the natural beauty of our state parks. Each of our state’s twenty-four state parks are represented. Williams shares that over fifteen million people travel through our state parks each year. He writes that there is a state park located within an hour’s drive for any Hoosier.

It’s a closer look not only at the sometimes hidden prettiness of these parks, but part of what makes them special (and worth holding on to).

For example, William’s shares that many trees at Spring Mill State Park are so giant, some over twelve feet in circumference, that they are thought to be 300 years old. He puts it into perspective by mentioning that they would have been saplings before George Washington was born! Can you imagine? It makes you want to go see them for yourself, doesn’t it?

An entertaining blend of images and unique facts about the parks, as well as more detailed information to guide any potential visitor, make this a definite “must” for outdoor lovers everywhere.

Although most of us wouldn’t probably ever consider tromping through our state parks during the winter, William’s lovely book might just change your mind! Each season is represented. Now that’s a dedicated photographer! He’s worked for The Nature Conservancy in Texas and Indiana, specializing in prescribed fire and endangered species management. Now this Indiana author is actively working with agriculture to make changes that will positively impact the water quality in the Wabash River and the Western Lake Erie basin.

For a closer look at Matt Williams nature photography, head to his website: MattWiliamsNaturePhotography.

Where to Buy Indiana State Parks

Then you may head to Indiana University Press and purchase your own copy of Indiana State Parks by Matt Williams, a fantastic addition to any Hoosier’s personal library, or add it to your Amazon wishlist so you can remember to buy a copy at a local bookstore near you.