little Indiana received Moulin Roty Cinema in a Box in exchange for an honest review. My opinions remain mine and mine alone.

You could say that our youngest is obsessed with entertaining. If he’s not performing a show for us (complete with song, dance, and plenty of slapstick), then he’s drawing or “writing” a story. He’s five, so the writing part doesn’t necessarily make sense.

He explains his drawings and random words (he can spell a few words like “look,” “mom,” “dad,” and his brother’s name) so we do get the general idea at least. But then we discovered a new toy that has not only been making waves in the world of children’s toys, but that promised to provide the kind of items he needed to accomplish what he’s been looking for all along.

Moulin Roty Cinema in a Box 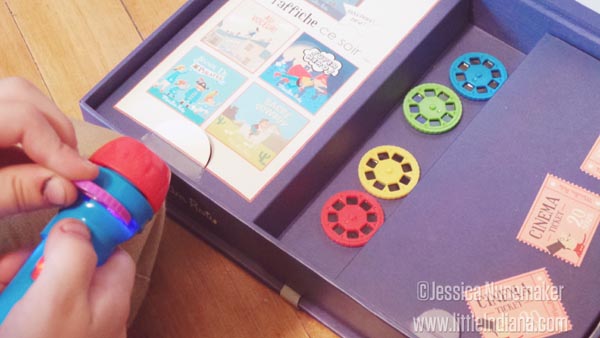 Moulin Roty Cinema in a Box in Use

Tucked inside of a nice, compartmentalized box, all you need to do is add popcorn! Using a small gadget that looks like a cross between a classic stereoscope toy (1980s children remember them as View-Masters) and a flashlight, kids project images onto the underside of the white box lid.

Each of the slides contain one full story–minus the words. Kids can easily project the image onto the box and narrate their own stories. It’s really incredible! It works the best if children use it in a darkened room, but our son doesn’t even mind and breaks it out any old time. He just looks for more shadowy places to make it slightly easier to see.

But what’s a makeshift movie theater if it can’t provide any extras? Rest assured, there are tickets and even a “Now Showing” slip proclaiming the title, date, and time of the big event.

You could say that our five year old has been loving it! He likes to copy down titles of books, the actual titles of the reels, as well as make up his own. I think The Robber Steals is one of my favorite made up titles of his so far. Sometimes his stories make total sense. Sometimes, not so much. But they are always guaranteed to make us laugh! 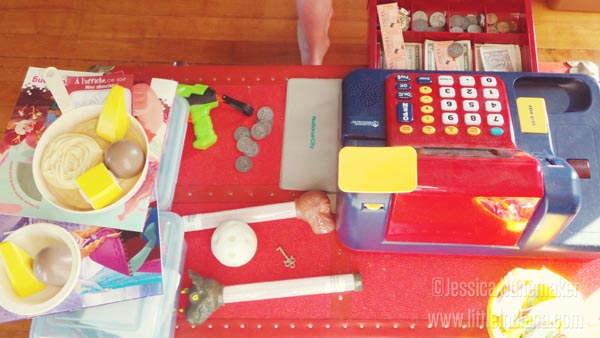 The innovative toy is imported from France by MagicForest. You can bet it has captured more than a little attention! Most recently, The National Parenting Center awarded the toy its 2015 Spring Seal of Approval.

The Moulin Roty Cinema in a Box comes with: five story discs that fit inside of the flashlight (sized just right for small hands), a small pad of paper for jotting down the title (roomy enough for a small movie poster effect), date, and time of show, and a smattering of tickets to the big event, all easily secured inside a ribbon-latched box that’s sturdy yet attractive.

In the weeks that we have had this clever toy, our son has not yet set it aside. He has currently shifted playroom furniture to make a long counter in front of his play kitchen. Now he offers us dinner and a movie! It’s pretty cute (even if I’m not sure about the bean, hamburger, sausage, ham, and steak burger on his menu). 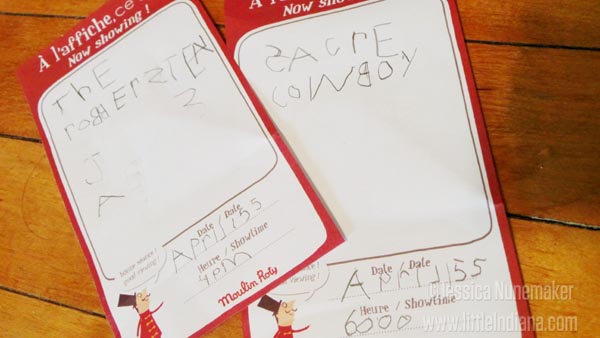 Moulin Roty Cinema in a Box Slips for Title and Showtime

I decided to share his bit of inspiration by recording his latest movie as shown above. Short and sweet, remember that the toy will work best in a room that is not glowing with sunshine, like ours.

Still, I think it gives you a good idea of how it works! Yes, some of the items included in the Moulin Roty Cinema in a Box toy are written in French, but we think it is kind of charming. Who doesn’t love a good foreign flick?

Small Towns: Destinations, not Drive-Thrus! I’m Jessica Nunemaker and THIS is little Indiana.