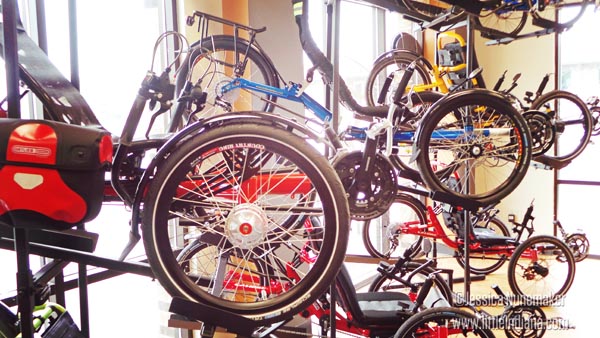 Spencer Short was  preparing to accept a corporate bicycle-related job and move to Michigan. Instead, he bought Pumpkinvine Cyclery in Middlebury, Indiana–and the very next day he found out he was going to become a father. That was back in 2011, and judging by the size of the well-stocked shop, it appears that his decision to take on the small business was the right one.

Located close to the Pumpkinvine Trail, an almost twenty-six mile paved path that jogs past many an Amish farm was made for walking, running, pushing a stroller, or biking! Pumpkinvine Cyclery provides hourly, daily, and weekly rentals. We fully intended to do some biking and see the backcountry. How far would we get? Well, we had no idea. But we sure wanted to see as much of the trail as we could. 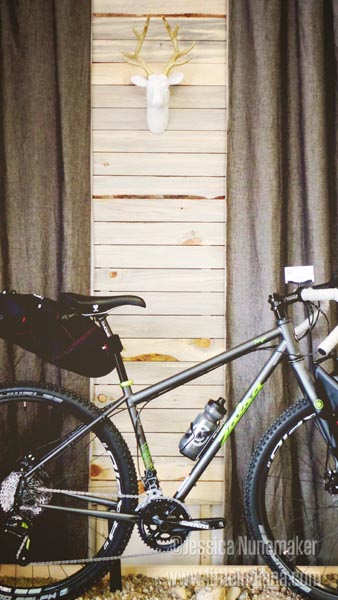 Pumpkinvine Cyclery is one sleek space. We were here to get outfitted for the Pumpkinvine Trail. I took a few minutes while the kids were getting helmets to poke around the shop. I have never seen so many bikes, and so many different kinds of bikes, in one place.

There were more than the kind of bikes you typically see on the road. There were fat bikes and road-hugging recumbent bicycles (and a nice assortment of both) but it wasn’t cluttered at all. It was so easy to make my way around the spacious, well-organized shop, gaping at the massive selection of gorgeous bikes with my camera in-hand, of course.

As some of  you might know (or remember from previous articles or from my occasional Instagram pics), I have what was an elderly woman’s bicycle. There are no speeds. But it’s a solid bike even if it looks a little out of place and, well, shabby next to my husband and our boys shiny, new bikes at home.

Still, I’ve ridden it from one end of my small town to the other and everywhere in between. I was a bit apprehensive to not only try out a different kind of bike, but to pull some sort of kid’s trailer behind me to hold our youngest. 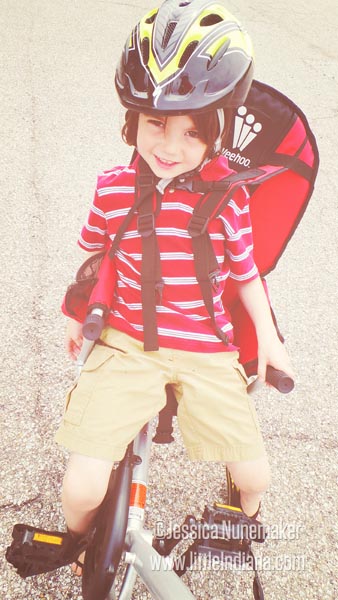 I shouldn’t have been concerned at all! We had a choice of two kinds of trailers available for rent that fit Kid #2’s size. I had no idea which of the two would be the best fit for me. Spencer’s help was so appreciated.

There was one kind of children’s trailer that attaches to the bike and let’s the kid sit a bit more level with you. Another option, the WeeHoo I-Go Trailer, was completely different. Low to the ground, it had a cushy bike seat with secure safety straps, a covered zippered pack behind it, and even pedals.

After hearing it was the same seat that the owner himself chooses, I went for it. Kid #2 was nervous about it at first since it was a totally new experience for him, but we started out slow–before we zipped around. It was so easy to maneuver, lightweight (even with a five year old on there), and a lot of fun for him.

He thought that when he pedaled it made us go faster. It was pretty cute–and I wasn’t about to set him straight, he was having so much fun with it. I appreciated having a bicycle with speeds. It made my job way easier.

As for our oldest son, Kid #1 had the green machine: a bright green bike that fit him perfectly. They know what they are doing at Pumpkinvine Cyclery. Both of us had bikes that matched our height as well as adjusted helmets before we even started out.

Biking on the Pumpkinvine Trail 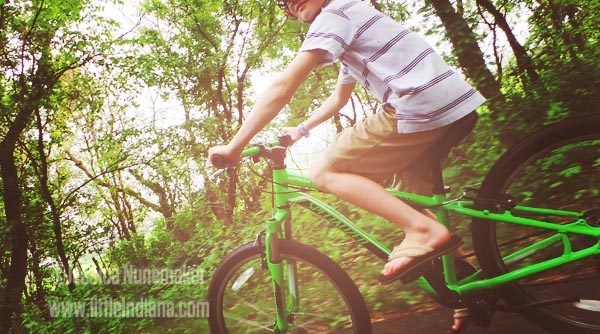 So, we set off for the Pumpkinvine Trail. We chose to get our bikes back by close of business. We knew how far we had traveled thanks to clearly written trail signs. Those were a welcome sight.

As for the trail itself? Smooth and divided, it was easy for Kid #1, age nine, to see when he was too far over, and to get back to the right side of the painted yellow line. He was having such a great time changing the speeds on his bike that he would dart up ahead, slow down and wait, or zip back to us. It felt so safe that I didn’t even mind. Upcoming roads were nicely marked though on our section of the path they were few and far between.

By the end, I was almost sad, knowing that this will most likely be the last time he ever rides with me like this. It was kind of like when he grew out of his bike seat. I missed hearing his constant chatter and singing. I love how the bike trailer gave us that easy bonding time and also a place to store our reusable water bottles and “emergency” snacks. Since we were only going to be gone an hour or so, I didn’t think we would really need them but you never know. I like to be prepared.

Kid #2, on the other hand, put his rental bike through the paces, and wow did it perform. He still talks about it today and how much he loved that bike. For everyone in the market for a kid’s bike, you can’t go wrong at Pumpkinvine Cyclery. They’ve got one heck of a deal: purchase one of their new children’s bikes and, if it is traded up within four years, they will give you credit towards a new bike for the big kid.

I think that that is really amazing. They call it the Kids’ Bike Trade In & UP program. I know I tend to balk a bit when it comes to buying brand new bikes for the kids. Good bikes aren’t cheap. But knowing I will receive store credit to go toward his next one helps take the sting out of it. 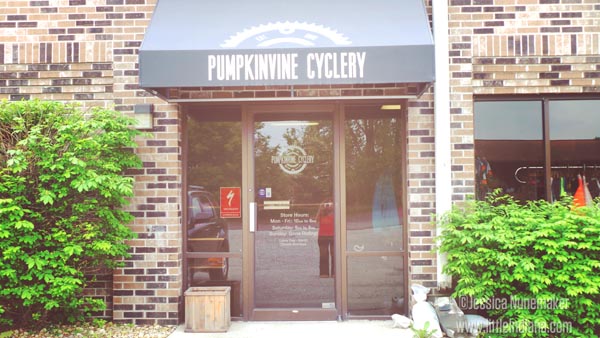