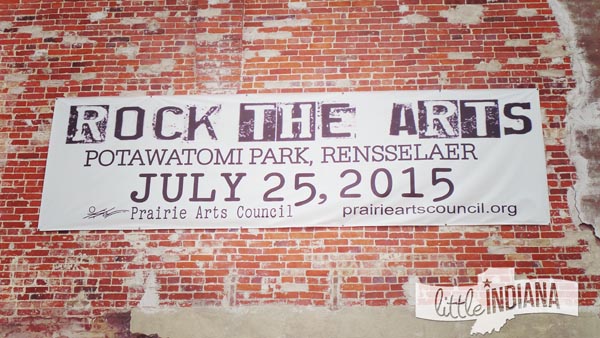 What do you do when you want to cement your town as a destination? You come up with a different kind of festival, something other than the (much beloved) town wide yard sales and chicken dinners that are typically associated with a small town event–and take it in a whole new direction! Rock the Arts is that festival.

There’s many different ways people make that happen, but for the members of the Prairie Arts Council (PAC), the answer came in an unexpected way: a local-focused festival dedicated to music and art. I got in touch with Ryan Musch of Rensselaer, Indiana (former wedding photographer, fellow Kankakee Valley High School graduate, and the small business owner of (the gorgeous) Embers Venue located downtown).

He shared the early festival beginnings, “When we decided to pull the plug on the Taste of Rensselaer, something had to fill the void and we decided that if we created a music and art festival that had the ability to evolve, it could serve the community much better and create better exposure and ability for local artists.”

...if we created a music and art festival...it could serve the community much better. Click To Tweet 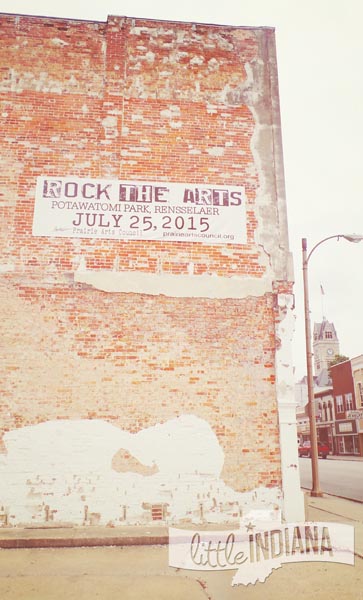 They got to work! Throwing out the old event, they planned a festival that showcased a mix of local talent with big name performers thrown in. But the group needed help! Undertaking what could potentially be a huge event would require a lot of hands, especially for an event that would require no entry fee.

It is now the main fundraising effort of the Prairie Arts Council, a local non-profit that helps funnel funding to Jasper and Newton County music, art, poetry, and dance programming.

Rock the Arts relies on sponsorship dollars to keep it afloat.

Beginning just last year in 2014, Rock the Arts has changed a little, fine tuning its artsy opportunities and featuring only locally-made vendors and artist’s booths. Last year it featured three bands: The Howling Tongues, Fever Fever, and Brandon Whyde. This year? Well, this year is a whole new ball game.

Musical Line-Up at Rock the Arts

Occurring at Potawatomi Park July 25, 2015, festival goers can expect two music stages: a main stage and a side stage. Featuring The Verve Pipe as its headliner, it is guaranteed to be entertaining! I was living in Indianapolis and rang in the shiny new year of 2000 downtown, during the New Year’s Eve bash that also featured The Verve Pipe! It would be fun to hear them again, fifteen years later. I can say that that alone makes it visit worthy. But that’s not all.

They have greatly expanded the musical offerings this year. You can expect to hear: Jackson Drake, The Mutts, Xoe Wise, MODOC, Tall Walker, Mike Mains & The Branches (who have also played at events like SXSW and Summerfest), and Raura.

In a tribute to a man who has been termed the “founding father” of Rock the Arts, The Mutts was chosen as one of the participating bands in part because it was one of the only band’s that Robert Lewis ever professed to like when once comparing bands with Musch. Visitors should expect a short tribute to Mr. Lewis in honor of his memory–and his foresight in preserving and stimulating the arts in this small Indiana town. 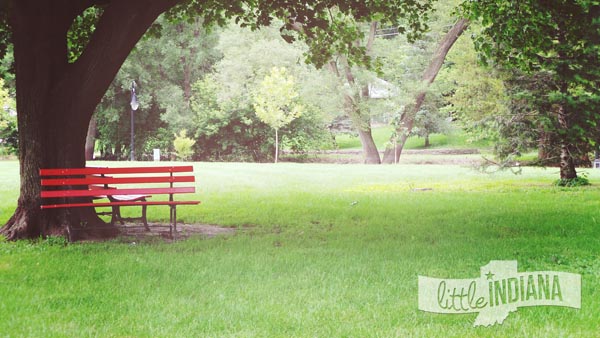 Rock the Arts Festival Will be Held Here at Potawatomi Park in Rensselaer, Indiana

It could end there. After all, that’s a lot of music! Everyone loves music, right? But when you add in the rest of the activities at Rock the Arts, you have one truly great festival!

Local winery Carpenter Creek Cellars are introducing a special festival edition wine just for the event with an American Strawberry Table Wine. Doesn’t that sound delicious? Now that’s a fitting complement to an Indiana night! They will bring along their other favorites too. Beer lovers will be glad to know of a beer wagon as well.

Volunteers have worked hard to get this festival off the ground, morphing it into something of which they can be proud. Just a few weeks before the festival, Rock the Arts festival volunteers and sponsors enjoyed a concert inside of Embers Venue with no admission fee. Everyone else had to buy tickets. Michigan band The Crane Wives entertained while volunteers networked and connected, finding common ground in their support of the local arts movement.

They call it a Meet and Greet opportunity. I call it a really smart way to unite the community. 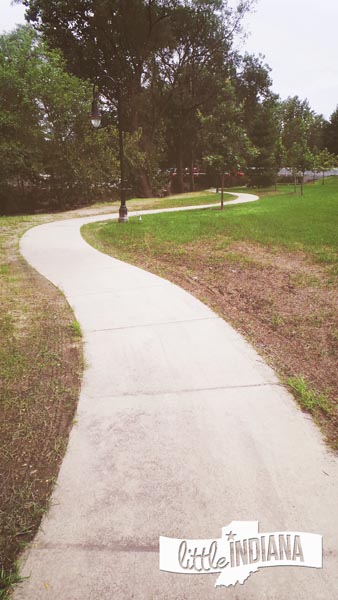 Rock the Arts Festival Will Be Held at Potawatomi Park in Rensselaer, Indiana

We all know how important it is to support our local businesses. I hope that Rock the Arts continues its emphasis on local–and that this devotion remains true in all aspects of the festival.

Any event that locates themselves downtown is always a “win” in my opinion! The unique mission of this festival will easily snag it a place in the hearts of others too. Consider bringing along a bottle of mosquito repellent and join in the fun on July 25, 2015 from 2 PM – 10:30 PM CST at Potawatomi Park in downtown Rensselaer, Indiana.

Follow along Rock the Arts Facebook Page and consider a small (or large!) donation to the Rock the Arts festival, to guarantee a festival that’s always evolving!

You may make your donation on the secure Rock the Arts Donation website right here.

Have you been to the Rock the Arts festival? What band did you love seeing in person last year? Who are you most excited to see this year? Please let us know in the comments below!