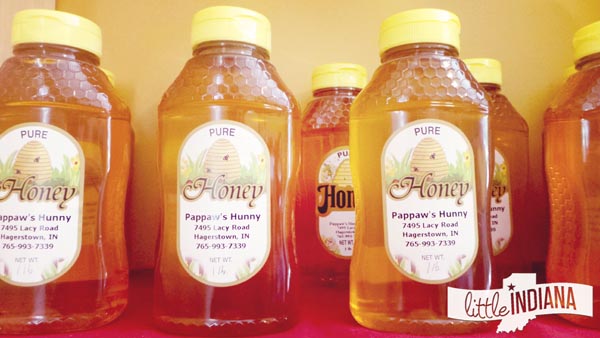 If you have been looking for a great central Indiana honey farm, you’ll want to venture over to Pappaw’s Honey Farm in Hagerstown, Indiana. It is a beautiful drive through country roads to get to a real piece of paradise.

Are you familiar with Dougherty Orchards (post coming up about them very soon, too!), then maybe you would be interested to know that this is where they get their honey. Those cute little bottled bears and those glass jars come from Pappaw’s Honey Farm. If you’ve taken a tour of the animal area of Dougherty Orchards, you may have noticed the hives back behind them. Yes, those belong to Pappaw’s. Now that’s really local. 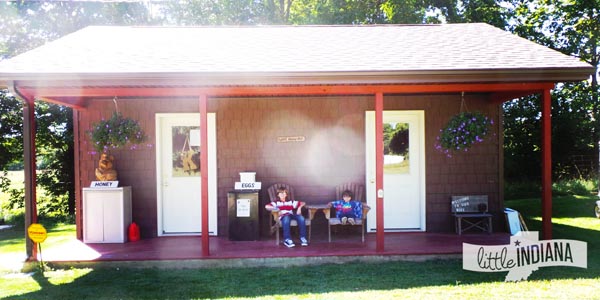 First things first. We met Gary & Paula Keesling at their honey headquarters. This quaint little building houses both the bright and cheery market area of the honey business (it’s the door on the left) as well as the honey bottling area. Gary and Paula are grandparents. Yes, that’s where the term “Pappaw’s Honey Farm” came from, because, as Gary put it, that is exactly how the grandchildren would refer to their business.

You can tell their grandchildren are a big motivation behind what they do. They have that gleam in their eyes when speaking of them that just warms your soul, you know what I mean? It’s so awesome to see two people who care so much for the little people in their life. In fact, the kids were inside at the time of our arrival. They weren’t going to let them know about our visit because the younger kids would be jealous at the fact that other kids were riding around with grandpa in “their” golf cart! That’s just cute.

The Keeslings had five acres in 2001. Now they have grown to ten gorgeous acres. Their purpose was “to have a place where our kids and grandkids could come out and see a farm, where your food is grown, and how nature works from a farm standpoint.” When Gary lost his job one Spring, the loss turned into a blessing in disguise.

“We grow our own. Paula cans. Cherries, blackberries, raspberries, in summer we eat on the deck. All we are eating is grown here.” Paula even makes her own noodles when she has an especially large bunch of eggs to use. They aren’t completely self-sustaining though. “We try to be as practical as we can,” Gary shared. They have 1000 pounds of meat divided between three freezers. Not bad for a ten acre plot!

So, why honey? Where does that fit in? Gary said, “In 2010 or 2009, I went to the Indiana State Fair agricultural building and went through the honeybees. I told Paula how natural is honey and went to bee school.  In 2010 we had four hives. I’m old but the hives kept growing and I thought ‘we ought to sell this stuff.'”

That is what they do. When they are home, the shop is always open. They put some honey and eggs on the porch for folks to purchase when they aren’t around. So far, the honor system has worked well. The day it ends, is they day they will stop with that part of it. They typically have a dozen eggs a day but it ebbs and flows. They charge for eggs a fair price, one that helps pay for their feed, and not a penny more. It’s not a business for them. But the honey, now that’s the booming part of things! 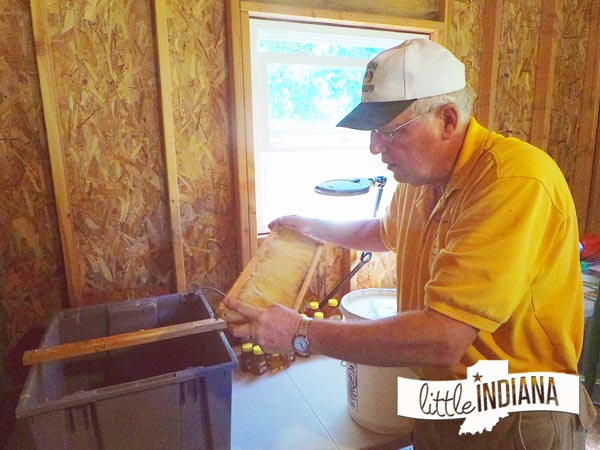 We decided to begin where it all happens: the honey extraction side of the shop. Gary took us through the steps required to bottle a jar of honey. He uses a 9 frame motorized honey extractor. Gary admitted that it gets more than a little sticky in the room. I can only imagine.

The extractor spins the honey out of the comb. It has to be kept warm otherwise the honey thickens if it is cooler. He shared that even with the fan going, it reached 92* in the small room where he works. “That’s why I had to add this electric extractor. I added ten years to my life,” he joked. He typically extracts honey two times a year. “In the first part of July, I’ll get the frames and do a small extraction.” Due to locust trees, spring hay, and other early Spring vegetation, you end up with a clearer, lighter-in-taste honey.

It’s quite a process. Bees put a wax cap on each cell, to protect it. “If it isn’t capped, you get wet honey.” He won’t begin unless “it’s at least 50% capped and with a 17% moisture content.” He likes to give the bees a chance to firm it. It will continue drying in its comb. They use this wet honey for their personal cooking.

They began with 41# and now have about 9# left. He puts it in quart jars and they bottle it. The extraction process can draw out the bees but they won’t attack anyone. The Keeslings even use the wax to make their own candles. Spring is really busy.

What about the winter? That’s when Gary gets in the kitchen. He enjoys creating his own honey barbecue sauce. Oh, my is it ever good! It is sweetened only with honey and molasses–no sugar. This year, they have grown habaneros so there will be three kinds of peppers to make it hot. There is a lovely mild sauce available too. My favorite is the cinnamon creamed honey. It’s so good on my homemade biscuits recipe.

They have seventy hives now. He says that you can get as big as you want to get. When it comes to bee hives, you can add in as many as you can keep up with. How are his bees doing? Have they been affected by the massive bee loss?

At Pappaw’s Honey Farm, not so much. Last year, the state reported a honey loss of 46%, his loss was 20%. Two years ago, also according to Gary, the state reported a loss of 65%, Gary had a loss of 46%. “In the last two decades, people are using more chemicals on their yards than they ever did,” said Gary. That doesn’t create a very safe place for a bee. Add in the bee-killing virus, and you have got trouble. But Pappaw’s Honey Farm seems to be doing okay. Dougherty Orchards doesn’t spray their trees until after they have blossomed.

I figured that would be something that all of you would be interested in seeing as well. You can easily view my video and see a hands-on part of the process. After the honey extraction process is finished, Gary saves time by letting the bees take care of the cleaning. He simply sets the boxes out and lets the bees get to work. They will actually take all of the wax off of the boxes. “We use bees to recycle any extra,” said Gary.

More Than Honey at Pappaw’s

As you may have guessed from the image above, Pappaw’s Honey Farm has more than honey. You see that cute little face above? He’s just one small part of this homestead.

I love many things. I enjoy taking pictures of plenty more. Donkeys, however, always get me right here. I just love their faces! I was so happy to see the cutest pair of mini donkeys while on the honey farm. In their quest for being a bit more self-sufficient, they have chickens. Did you know that free range chickens only means that they have access to daylight? I always thought it meant that the chickens could roam around a bit more.

Anyway, the chickens at Pappaw’s are contained. Coyotes jumped the fenced and killed a bunch of them. So, Gary got the mini donkeys, and there has been no trouble since. The donkeys followed us around while we were in their portion of the property. Why? They wanted treats!

Gary and Paula also have Scottish Highland cattle for beef and a few rabbits (the grandchildren love them). The Whitewater River flows behind their property. It never freezes. You can be sure that it just adds to the beauty of their ten acre farm.

What’s in Store for Pappaw’s? 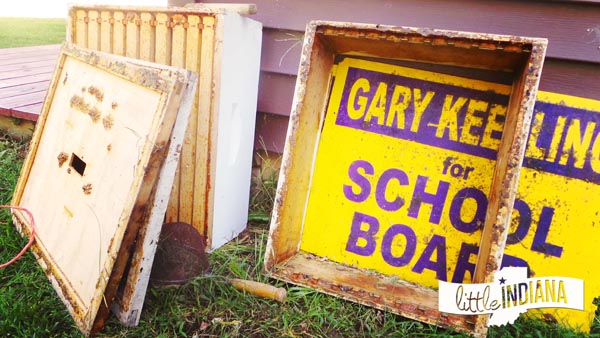 Things are going so well at Pappaw’s Hunny Farm, that Gary and Paula have discussed expanding their hive count to 100 hives in 2016. That’s really exciting news. For anyone else who has ever gone through a job loss as a family, it is wonderful to see that Gary has found his true purpose. Bees!

You can follow along in the latest doings at the farm by following Pappaw’s Honey Farm on Facebook.