After months of waiting, the press was invited to attend the Indiana Bicentennial Torchbearer Relay reveal. Not only were the names of the 2,200 Hoosiers shared who are to represent their counties in the event, but so was the outfit, and a great number of the torchbearers themselves. 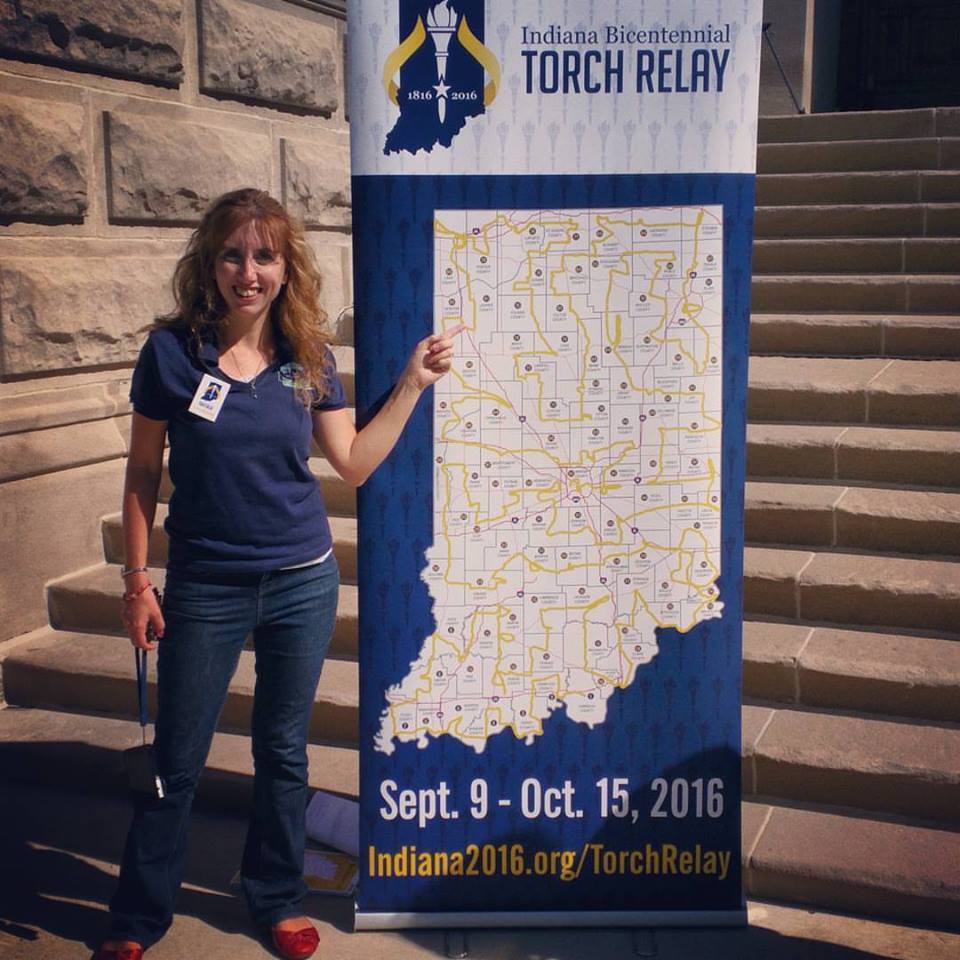 My 5 AM wake-up time came much too quickly yesterday. But I scrambled out of bed and got moving. After all, it isn’t everyday you get to be a part of history. So, I scarfed down a bagel, gave the babysitter last minute instructions, and headed out the door. In hindsight, I could have brought the kids, but I honestly didn’t know what to expect.

I drove right by where I intended to park. That’s my navigation skills for you. I drove by another option. Blast! If only Google Maps would tell you where to park. Finally, I found a parking garage. I then proceeded to drive around and around and around. There were no parking spaces that could fit my little Jeep Liberty. The attendant accosted me near the entrance and asked if I was looking for parking. Yes, yes I was.

He recommended a different area–but unfortunately, it was too low for me. I came upon a group walking towards a car. Were they leaving? I yelled out my window, asking if they were heading out. They were. I cheered, possibly scaring them a little. It was a great spot and right near the stairwell which almost guaranteed I wouldn’t forget where I parked later. Perfect! It almost made it worth the ten minutes I spent hunting.

Given my natural ability to become lost, I tapped directions to the Indiana Statehouse into my Nexus 6 (courtesy of Verizon Wireless). I then walked, and intermittently ran, the eight minutes to get there in time. Fortunately, it didn’t start on time, so I had time to walk the perimeter and check things out. 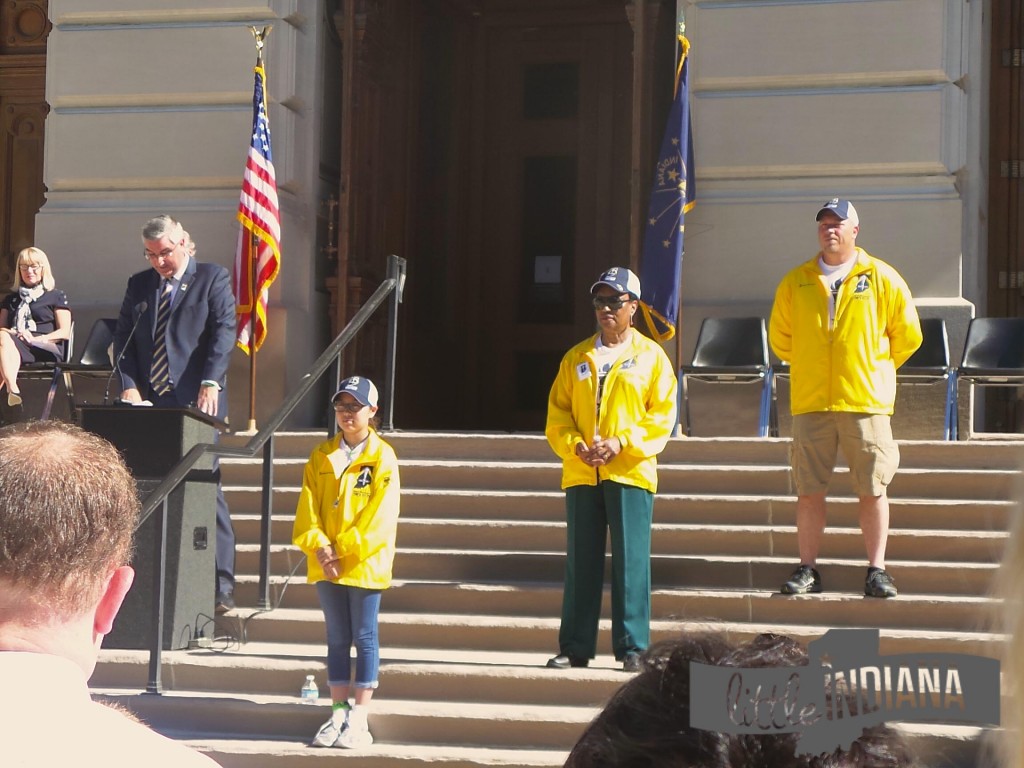 Several rows of seating surrounded the front of the makeshift stage. A large map showing the torch route stood to one side, with an actual torch, designed and made by Purdue University’s engineer school, resting nearby. Further out, folks could view the Indiana made Subaru Outback painted with the torch emblem that will serve as the official torch caravan for the ninety-two county, 3200+ mile trip, in just seven days. There was also a selfie station but I didn’t do that one simply because I forgot to try to return when there wasn’t a line. Oops.

So, Indiana Executive Tourism Director Mark Newman, Indiana Lieutenant Governor Eric Holcomb, Kim Smith, the President and CEO of Indiana Farmer’s Mutual Insurance, and Noelle Szydlyk the State Director for the Bicentennial Torch Relay were all on-hand. All but Noelle Szydlyk approached the podium to talk about the event.

They shared the uniform that the torchbearers will wear. Done in the colors of our state flag, the jacket is a lined windbreaker that bears the torch logo on the front. “Torchbearer” is written across the back. The shirt and hat are the same idea. It will really standout as the torch begins its route in Corydon, Indiana on Friday, September 9, 2016 and end at the Indiana Statehouse in Indianapolis, Indiana on October 15, 2016.

Group Image of the Indiana Torchbearers

After the round of speakers, we were invited to hit the steps behind us, in order to get a photo of all of the torchbearers in attendance. I’m taller online, so I stood on the ground, rather near what ended up as the center. How about that? Thank you to Stacy D. for taking the panorama shot for me and for other members of the crowd. That was so nice of you.

Afterward, I saw Kate Burkhardt from Hamilton County Tourism with intern Mia Anderson. We were chatting when someone asked if I was from Jasper County. It turns out that there were three torchbearers from Jasper County there as well: Adam Barten, Sheila Maxwell, and I. We took a shot in front of the Subaru. Isn’t that fun?

The list of Indiana Torchbearers is a lengthy one. I was very pleased, however, to see that Mark A. Smith of Carroll County was also among those selected. That man is a font of Indiana history and someone you should seek out when at the Delphi Museum. I’m thrilled to see that Roselyn McKittrick (Milan 54 Museum) and Katherine Taul from Ripley County Tourism also made it. Michael Beauchamp (Modoc’s) is representing Wabash County. Patricia McDaniel for Wayne County. Excellent!

I am sure there are many of you that I have met on our travels that are also torchbearers. My eyes started to glaze over when looking at the really long hard-copy I have.  If I missed you, please let me know in the comments below, so I can call you out right here, and extend my congrats for your efforts.

You can see the list of Indiana Bicentennial Torch Relay Torchbearers here. 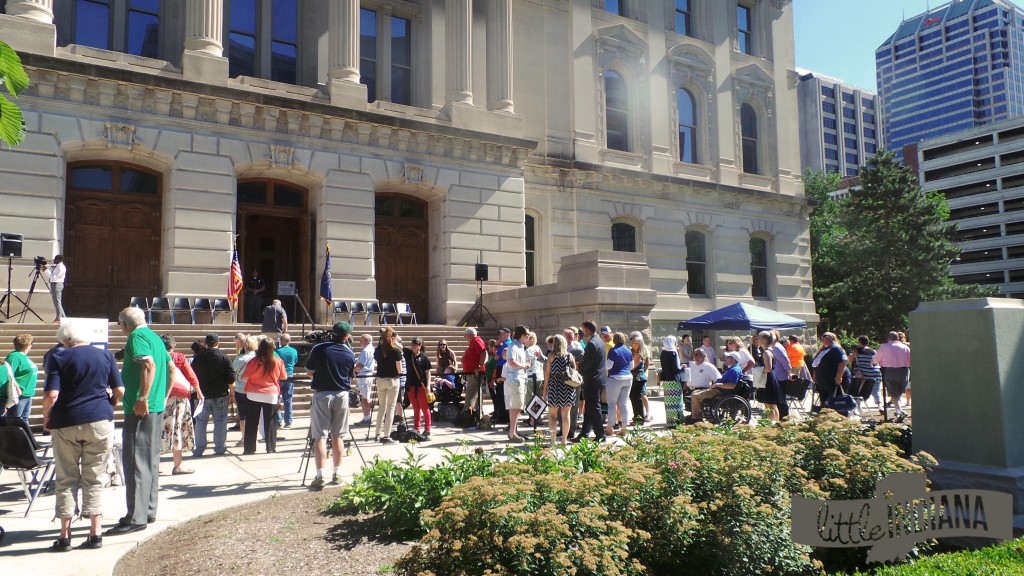 It was wonderful to see so many different Hoosiers all come together for one big event. I would have loved to know if every county was represented yesterday, but they did not reveal that information. I like to think so. Meanwhile, I’m hoping that I won’t drop it!

Check back because I will include the video I took while at the Indiana Statehouse yesterday. You can view the video here (below) or on YouTube.

Just don’t forget to tell them that Little Indiana sent you!