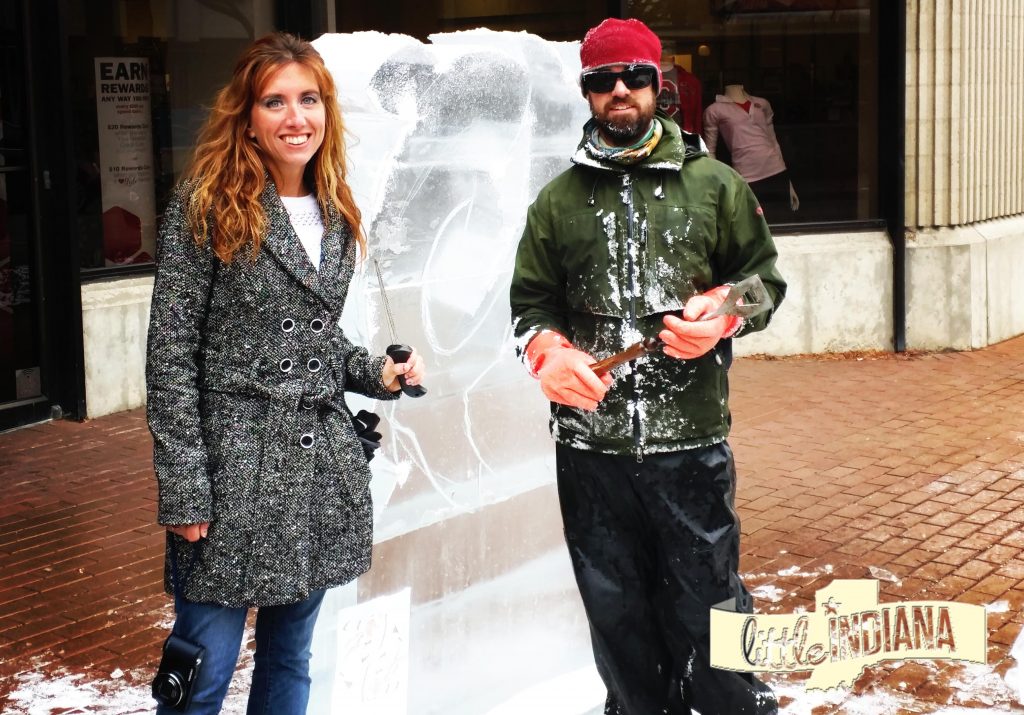 The only time you will hear a Hoosier say, “I sure hope it’s cold,” is right before the Richmond Meltdown Festival in downtown Richmond, Indiana. Temperatures hovered over 60* the weekend before and that is not good news for ice. But this time, our Indiana weather cooperated, bringing in plenty of cold, clear days just perfect for a festival that centers around chainsaw ice carving competitions.

It seems there’s an Indiana festival or event for everything: beer, bacon, wine, pork, agriculture, and then some. But I have to say, this is the first time I’ve seen one in Indiana that’s not only in the winter, but that’s centered around carving ice with chainsaws. 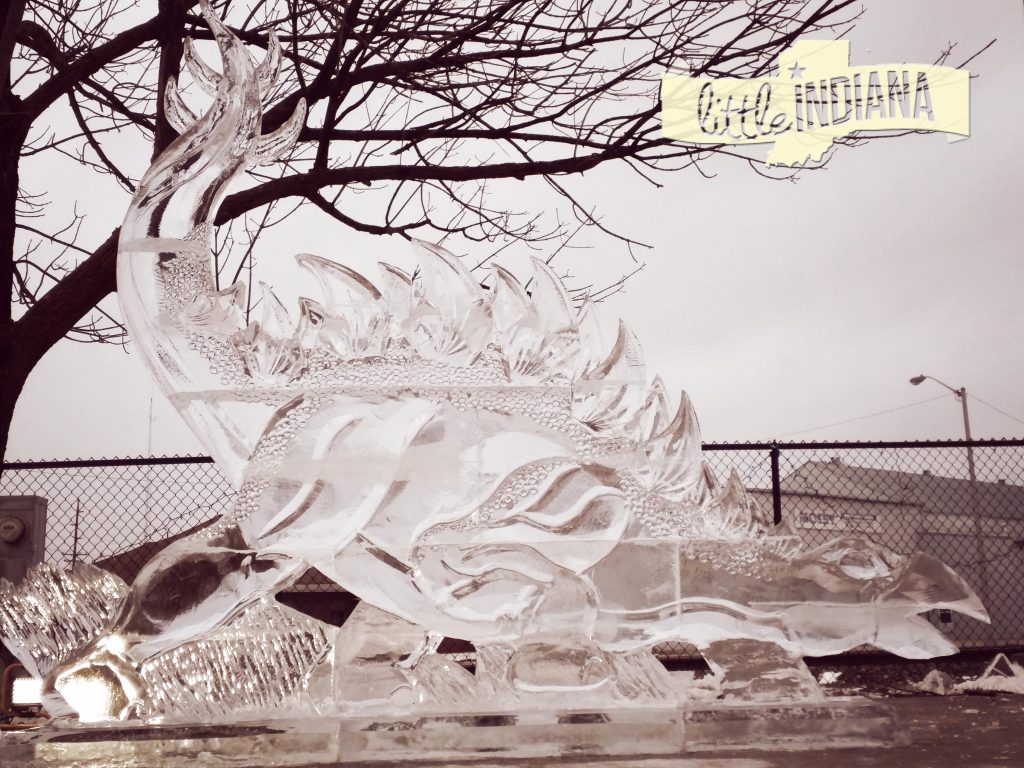 Ice sculptures, like this stegosaurus, are created on the sidewalks themselves in downtown Richmond, Indiana.

Every year gets bigger and better. Word of mouth is a powerful tool and you can bet people will be talking about this one long after the last bit of pyrotechnic display has faded into the night. Oh, yes. There’s more to this festival than the screech of chainsaws and the applause of the crowd. There were bursts of flame that lit up the Richmond Meltdown Throwdown stage. There was loud music. There were food trucks. There were even fireworks.

It’s becoming a pretty big deal. Folks tried to hand us Richmond Meltdown Throwdown banners at several local shops. It’s a competition between four teams of ice carvers trying to get their work done in forty-five minutes. We didn’t know what the banners were for but I had a hunch it would be used for voting. It turns out that I was right.

But I’m getting ahead of myself. That big event is the Richmond Meltdown Throwdown–and it marks the end of the festival. They save the biggest and best for last.

Before the Richmond Meltdown Throwdown 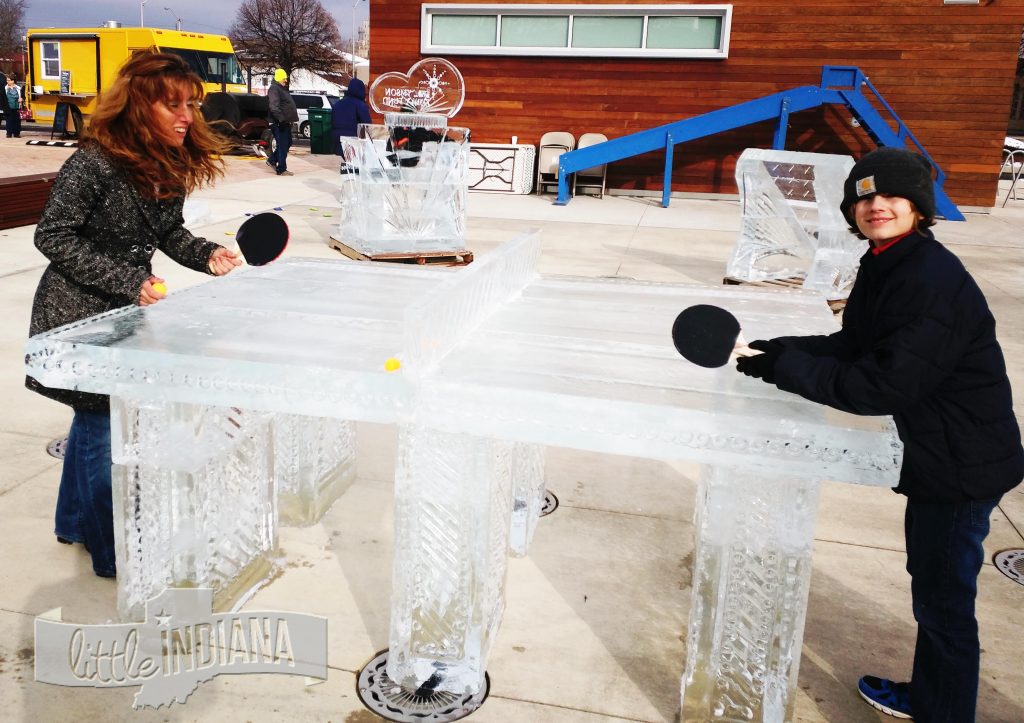 Play a game of table tennis on the full-sized table at the Richmond Meltdown Festival.

In the days before the event, the ice carvers get to work adding ice sculptures to the sidewalks of downtown Richmond. They decide what they want to carve and away they go. Right downtown, right on the sidewalk, right in the cold.

These men, so far I have only seen male ice carvers, work fast. It’s nothing for them to finish a 300 lb. ice carving in one hour.

Ice sculpting doesn’t even cover what they do. They are artists in every sense of the word. They start with a block of ice. On their own turf, they make it themselves, circulating air through it to prevent it from clouding over.

Then, they get to work. Each of them had a different process. Some get an idea and sketch it all out beforehand. Then, they use tools to etch the creation into the ice. Depending on how the ice cooperates or how inspiration strikes mid-project, it may or may not completely resemble the original idea. But it will be a 300-pound masterpiece either way.

These ice sculpting artists are part of the team. There’s a general sense of camaraderie, and competition of course, but they know each other. They’ve been competing against each other at competitions around the world, from Alaska to Italy to China to Japan.

I had the chance to speak to quite a few of the ice carvers. You know what I found amazing? Most of them had shared backgrounds–as chefs! See what they had to say about their work and their advice for anyone interested in making their own ice sculptures by watching the videos I’ve included below.

The guys involved in the Richmond Meltdown festival have a slew of awards and competition wins behind them. 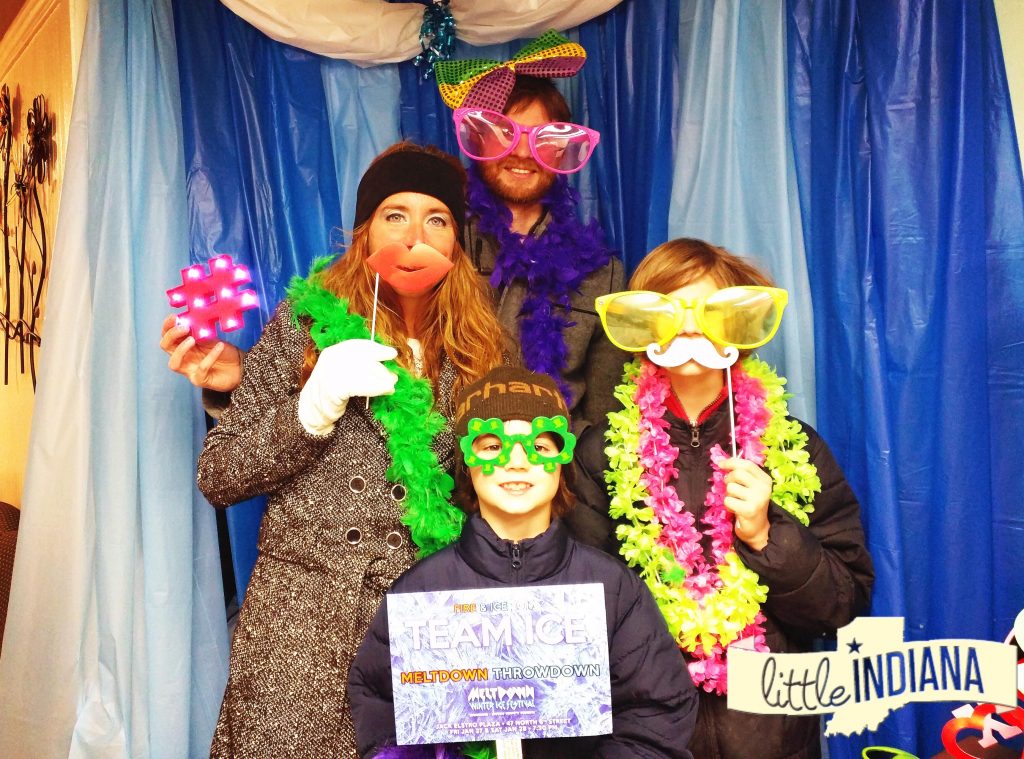 How much fun is this festival? Well, take a look at the events planned for Friday and Saturday. There was plenty to do all around the downtown. Bonus: there are fantastic shops in Richmond, as well as a chocolate shop and a bakery. It’s a win all-around again!

This volunteer-run event is free. There’s no admission to get into the events, not even the Throwdown or the Friday night People’s Champion event. 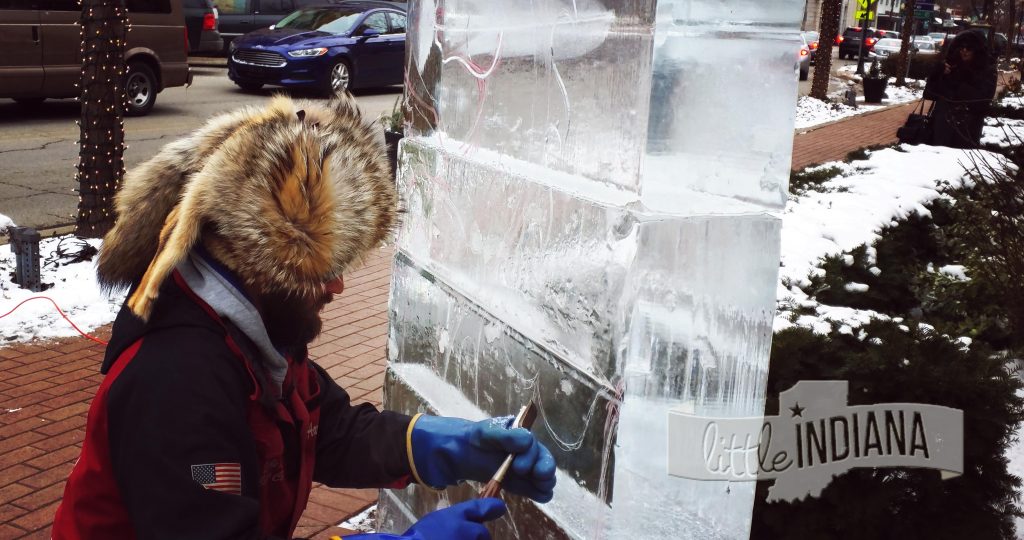 Ice carver Aaric Kendall etches his design before breaking out the big chainsaw in Richmond, Indiana.

You know a winter festival has to be good if it draws people out of their homes and out into the cold. Funny, one weekend before the festival, the temperatures were hitting 60*+. Fortunately, the temperatures cooled considerably.

Last year, the Richmond Meltdown Festival had a thousand people attend. This year had to be even bigger. What will next year bring? Fortunately, you can plan ahead. This time, there was a host hotel that offered special rates to festival attendees. With hotels and area bed and breakfasts, you have options.

Travel for the Richmond Meltdown Festival 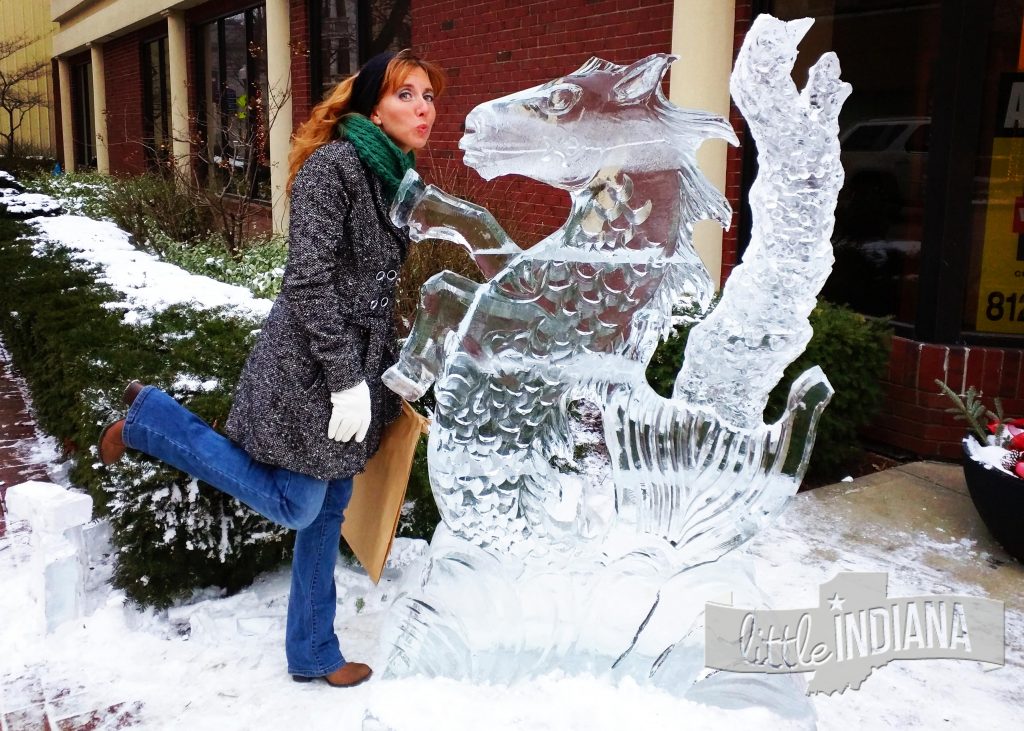 Get out of your winter funk. It’s okay to leave your house when it’s cold outside. It’s hard, but it’s okay. You won’t be disappointed. It’s a family-friendly, energetic, and all-around fun festival. Hey, I’m no fan of the cold either so if it gets me outside, you know it has to be a good one!

If you want to see more images of the festival, please take a look at the Little Indiana Instagram account. You’ll discover “as they happen” images you won’t see anywhere else. If you have a related image to share, tag it #LittleIndiana to let everyone get in on the fun.

Special thanks to Nancy Sartain and Visit Richmond/Wayne County for hosting our stay, the fine folks at Firehouse BBQ & Blues for the delicious dinner, and Grassroots Action Resource Center for the fun photo booth (and hot chocolate).