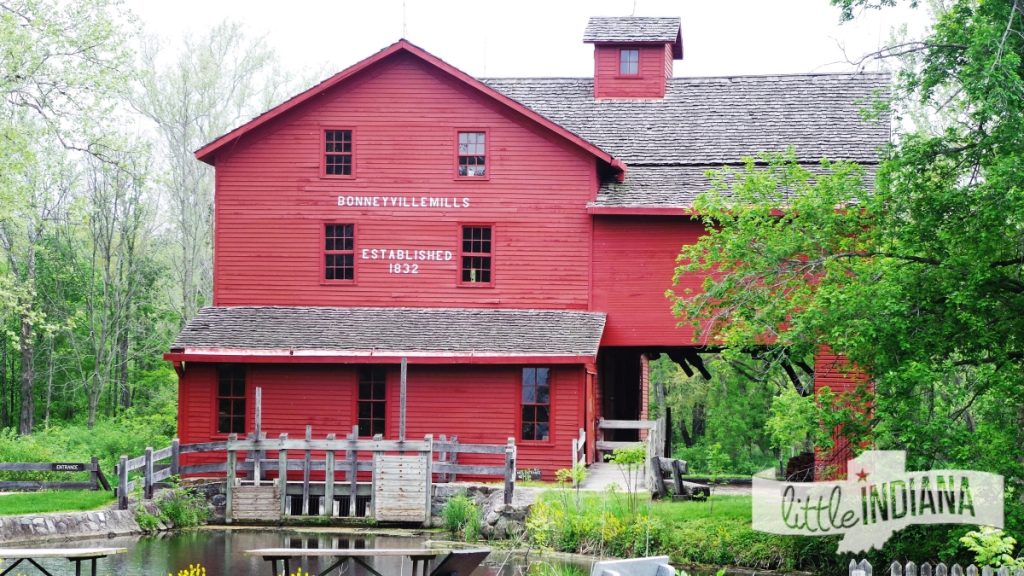 Bonneyville Mill was supposed to be the beginning of an urban hub. Instead, a series of events ended with the founder becoming an outlaw.

Some people have big dreams. In the mid-1830s, that was Edward Bonney. Born in Hittsboro, New York in 1807, it isn’t hard to imagine that the allure of staking a claim in the Northern Indiana frontier was an attractive proposition for a young man during that time period. Records appear to indicate that he was married in 1832 to Maria L. Van Frank back in New York, but nothing else seems to mention her name. 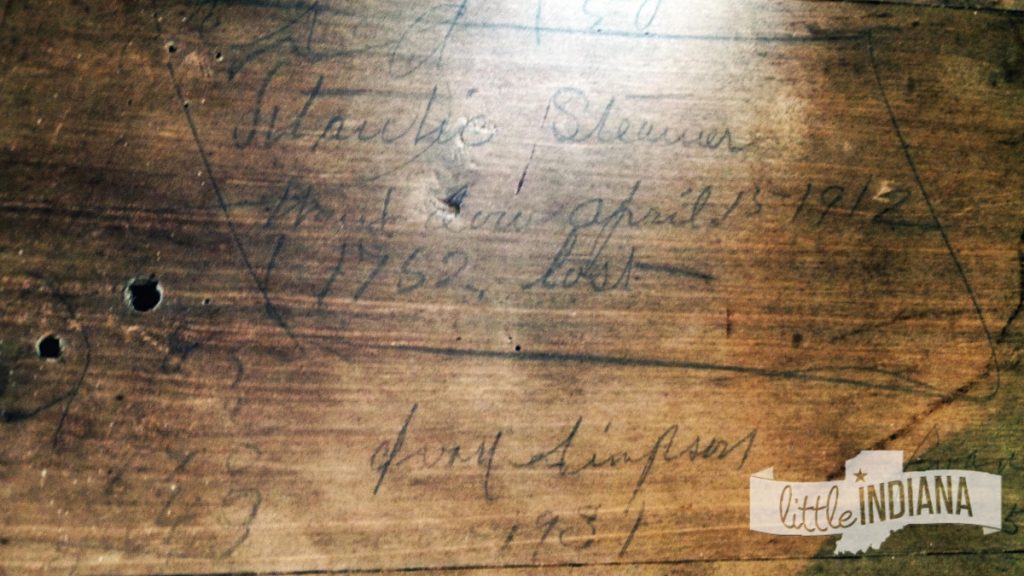 Look closely at the interior wall of the Bonneyville Mill. Important dates are noted, much like this one, when the sinking of the Titanic was recorded.

He purchased $800 acres of land for $600 in what is now considered Bristol, Indiana. Local help was needed to build the 40’ by 40’, 2 ½ story grist mill, sawmill and rock dam across the Little Elkhart River.  It was no small undertaking.

Bonney discovered a perfect patch of property. He decided the location, its proximity to the Toledo/Chicago trail and its relative closeness to the St. Joseph River would easily allow commerce to flow–and quickly grow a new town.

What’s more, Edward Bonney added something unique to the mix. He had obtained a horizontal turbine to take advantage of the power from Little Eel River. It was certainly something not familiar to those parts. Bonney had all of the pieces in place, what with the prime location and his mill that featured new technology. Now, he just had to get the town growing. 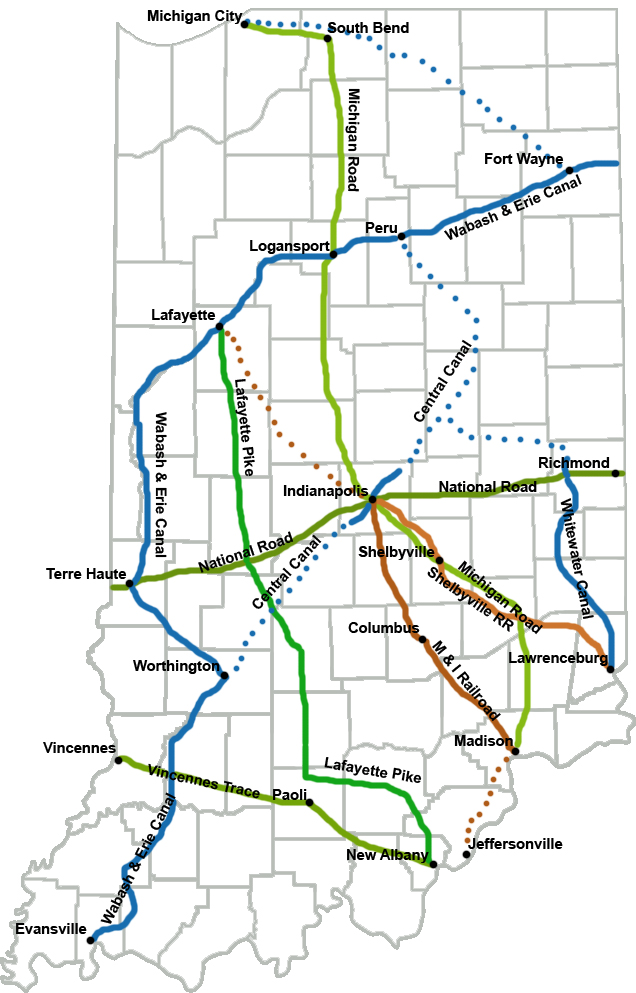 Too much, too fast. Map courtesy of Charles Edwards.

What was the US like at that time? The country was young. The war that succeeded in breaking British control had happened not even fifteen years before. The war of 1812 was still fresh in people’s memory.

The first locomotive entered the scene in the 1830s but it would be a couple of decades before they would really take off. For now, travel occurred over sometimes almost impassable roads or via canals and waterways. It was slow going.

By 1832, Indiana legislature had plotted out the pathways of eight different railroad lines throughout the state. Nothing happened with the charters, however, thanks to the Committee on Canals and Internal Improvements. Someone must have known someone else in order to thwart that attempt. The Committee had recommended the allocation of state funds to build canals.

Canals were huge. In fact, there were 1,105 miles of canals that connected the Hoosier state to the east.  You may have taken a trip to one of our two particularly enjoyable canal towns: the Wabash and Erie Canal Interpretive Center and Museum in Delphi, Indiana or checked out the history in Metamora.

It’s not altogether surprising. Roads at that time were more than rough, they were bumpy, muddy, dusty, and dirty. 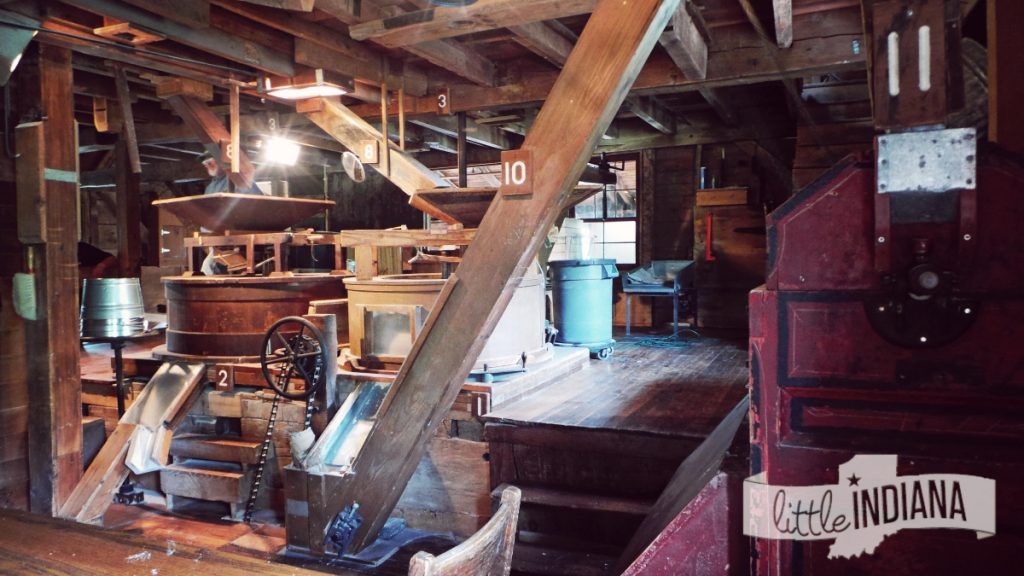 This is a working mill. Bonneyville Mill has seasonal hours so plan ahead accordingly.

Governor Noah Noble signed “An Act to Provide for a General System of Internal Improvements,” officially known as the Indiana Mammoth Internal Improvement Act in 1836. Now, there were an additional $10 million dollars to spend on canals, turnpikes, and railroads, enabling the extension of the Wabash and Erie as well as a new branch running from Madison to Lafayette through Indianapolis.

The project was initially smaller, however, in order to keep everyone happy, branches and canals and the paving of the Vincennes Trace and Michigan Road (to allow for year-round use) had to be added to the mix. The Lafayette Turnpike was also included, bumping up the amount of money needed and creating a much larger to do list than what was originally desired.

But the compromise allowed the act to be passed. With so many projects going on at once, labor and funding were in competition, and prices were rising. Governor David Wallace tried to get everyone to agree on completing one project at a time, letting that project pay for itself, before continuing onto the next as was the original intention, but no one could agree on which project should go first, as everyone had a different interest at stake.

Unfortunately, the Panic of 1837 occurred and almost bankrupted the state.

The interest payments became impossible. Every project, save the largest canal, were passed over to Indiana’s London creditors in 1841 in order to reduce the debt by half. But it wasn’t enough. By 1846, the last project was turned over for another half reduction of the debt.

Back in Bristol: The Town Didn’t Grow 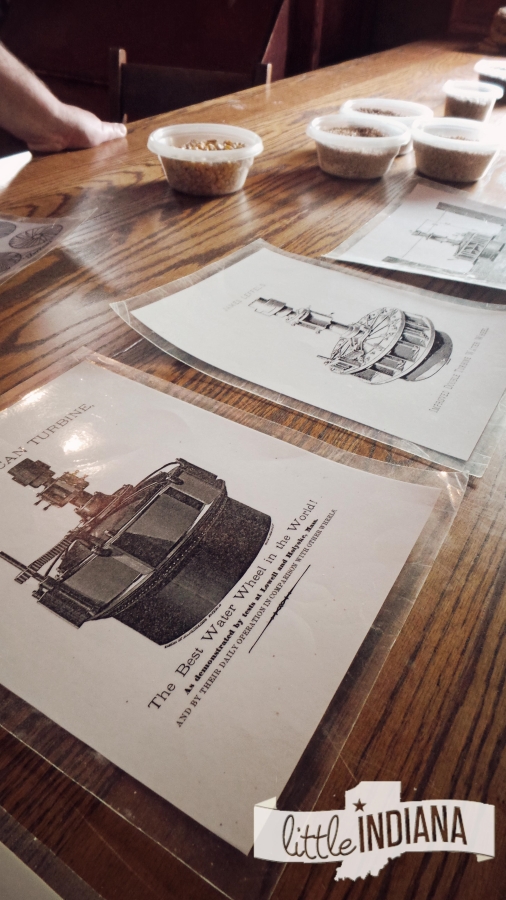 A farm town was not what Bonney had in mind. It was obvious that the railroad was going to completely miss his new settlement. So, too, was the canal.

Things grew worse for Bonney. Some sources say he was fined and charged with assault in 1839.

Edward Bonney moved on in 1841, opting to purchase a Bonneyville tavern/hotel. His dream for a bustling urban metropolis defeated, Bonney sold the mill and property in 1842 for $10,000. Some Bonneyville Mill sources say he was forced to sell after being accused of counterfeiting.

Again, sources conflict, but some believe that a year later, he was under arrest and on his way to trial in Indianapolis for counterfeiting, though others aren’t so sure. As the story goes, during transport with an armed guard, Bonney escaped, heading west to Illinois. In 1845 he made his way to Iowa, where he became known for his adeptness at hunting down criminals.

From 1843-1848, a central portion of the Mississippi River was rife with crime said to be committed by the “Banditti of the Prairie.” Bonney relied on his previous experience, going undercover as a counterfeiter in order to apprehend the criminals. He connected the group to the murder of Colonel George Davenport, for whom Davenport, Iowa was named.

Eventually, after four long months, Bonney arrested eight men, two sets of murderers, in connection with the house robbing and murder. Although one man disappeared and another escaped, the rest stood trial for their crime. Two of the group obtained a prison sentence while three others, brothers Aaron and John Long, and Granville Young were executed for Davenport’s murder.

Bonney returned to Illinois, was indicted for murder, and later acquitted. He became a postmaster, published a book Banditti of the Prairies, or the Murderer’s Doom!!, that underwent numerous reprintings (although it is thought to be ghostwritten). In 1863  he was still working as a bounty hunter and a detective. He decided to enlist in the Civil War.

It was during the Siege of Vicksburg, Mississippi where he received a leg wound that eventually killed him. He was 59 when he was laid to rest in the Bonneyville Cemetery in 1864, within the very land that he had once owned. 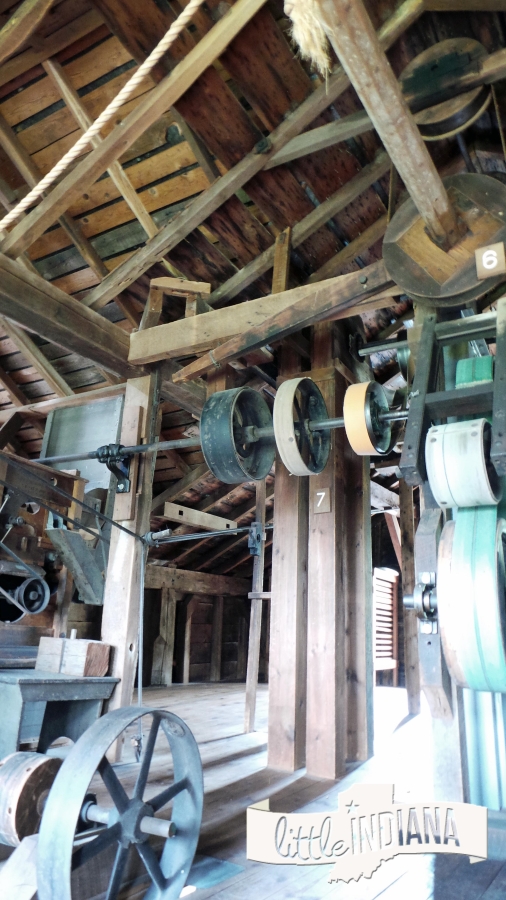 The mill passed through several hands over the years. Each owner would make a change here or there, adding on to the building, switching out the equipment, and in the case of one family–greatly increasing production.

The mill was converted to electric power in 1919. In the 1930s, a water wheel was added in, providing enough electricity to power several area farms. Through it all, the mill ground on.

The mill is a self-guided tour. It is well-lit, with strategically placed lighting to highlight various parts of the mill. Numbered signs let you know just what you are looking at. Of course, the tour guides are fantastic. The guide available during our visit had extensive knowledge of the mill and its history.

You would be hard pressed to find a lovelier property. There are more than 200 acres to explore. Take a picnic lunch along and enjoy the numerous plantings or pop into town and dine at Chicago’s Downtown Eatery (not in Chicago at all but it is in downtown Bristol).

Whatever you do, don’t forget to check the wall. It is there you will find the scribblings of historic events. As you may be able to see in the image above, even the Titanic was noted. The mill was added to the National Register of Historic Places in 1976. 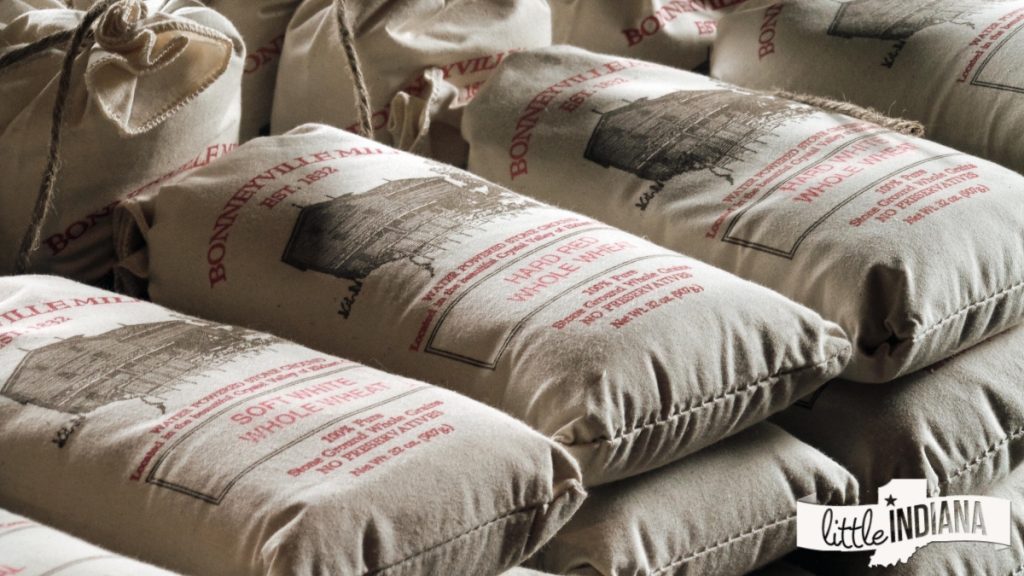 Don’t leave without stopping into the shop across from the mill for flour.

Indiana history doesn’t have to be boring. Look at the unique story behind Bonneyville Mill. It makes you wonder what other interesting stories are lurking behind some of our older landmarks.

For the latest events, peeks at the mill in the past, and other relevant info, follow Bonneyville Mill on Facebook.