I will pretend to adult until you show me something amazing–like the two-story climbing platform found at the James A. Henderson indoor playground inside The Commons in Columbus, Indiana. After that?

All bets are off.

My first question will be, “Are adults allowed?”

And then, like kids everywhere have asked since the installation of the KidsCommons play area since its dedication in 2013, “Can I go play?” 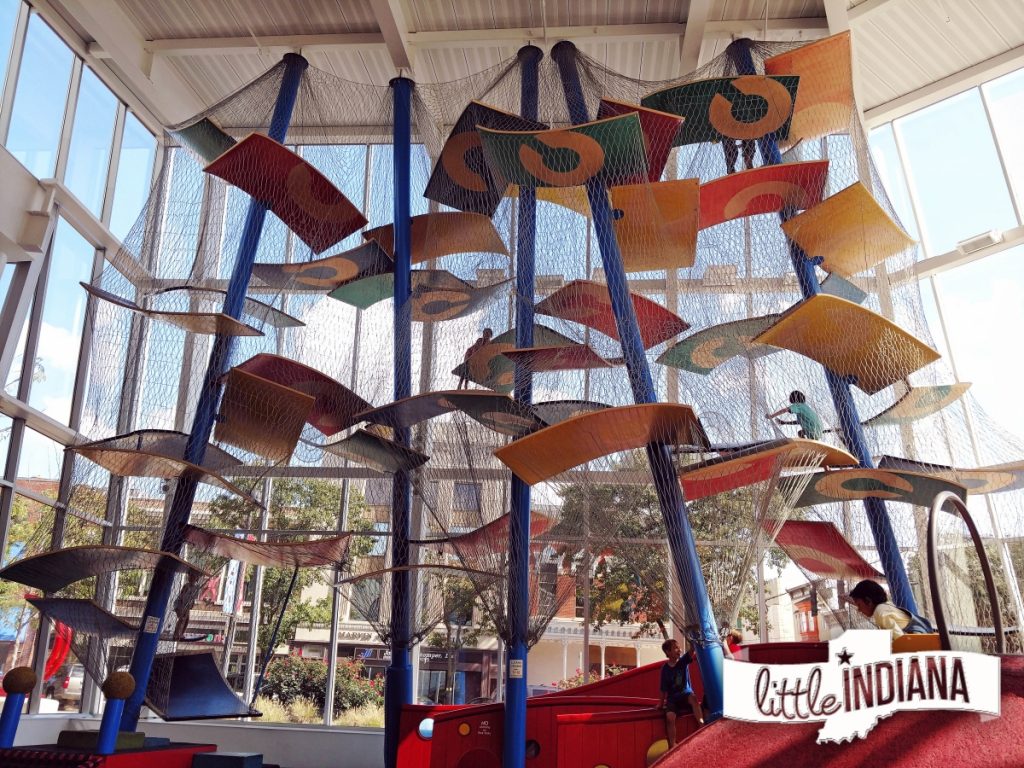 The free indoor playground in Columbus, Indiana is a two-story tall structure. It sits inside a spacious play area with separate floor-level age-appropriate fun for preschoolers and toddlers.

The Commons indoor playground is often confused with the children’s museum, KidsCommons, just down the street. These are two separate kid-friendly attractions, just so you know.

Here’s something you should know something about me. It’s really kind of important when you look at a structure like that.

I am afraid of heights.

Kind of fear of heights.

I recently had to be rescued from the second level of a kid’s obstacle course at a local attraction. I had a safety harness. I had both kids in front of me, the youngest of whom was climbing fast through the thing.

My husband was right behind me.

I made it over the rope climb to the first platform and then…I couldn’t move.


The floor was a long way down.

I had to have the high school kid working the attraction head over and take me back.

Yes, it was embarrassing.

However, I share that story with you because the Luckey Climber did not give me any problems. I did not freeze up or panic or need assistance from a kid. 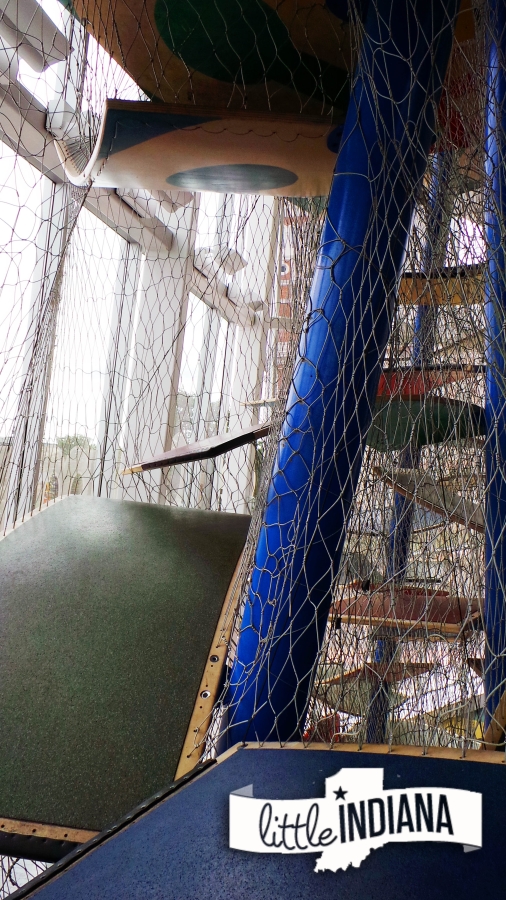 I’m inside the belly of the beast, otherwise known as the James A. Henderson Playground at The Commons, a space that’s part fancy pants event hall and part kid play area. As you can see, the platforms aren’t flat.

The Luckey Climber at The Commons in Columbus is just FUN–even for those of us with a paralyzing fear of heights.

See those platforms? What you may not realize from below is that the panels aren’t flat.

The structure adds a different element of fun and play than you would expect from an indoor play area because you have to pay attention to how you move from one platform to the next.

The company behind the Luckey Climber, Luckey, LLC. maintains that play on this type of surface has: 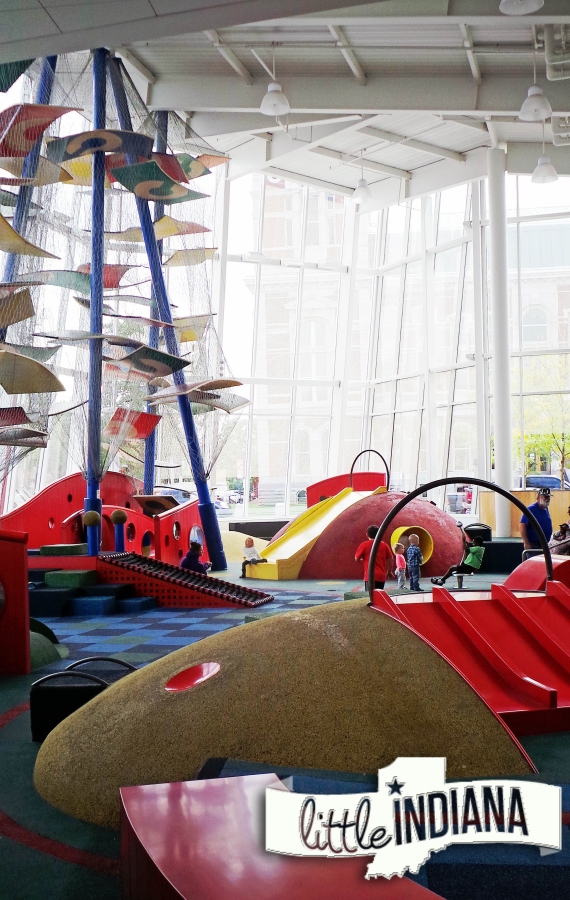 The Commons, often and wrongly referred to as KidCommons, is an indoor playground. One side of this building is an event hall while the other side is this: all ages free play.

While you are up in there, as you are moving, thinking, watching your step, and playing tag with your brother (as you can see in the video below), you are working on your balance and your coordination, all while figuring out how to get from one spot to the next.

But is it safe?

As the company behind the Luckey Climber states,

“Specifically, there are no falls greater than 18 inches and there are no “cascades,” meaning a child cannot slide down multiple climbing panels.”

As I mentioned earlier, the platforms aren’t placed how you may expect. In fact, you can’t stand up in the Luckey Climber.

There is a good reason for that too, according to the company website:

Now that is smart.

All Ages Fun at the Commons in Columbus

Climb up in the two-story Luckey Climber at the Commons free indoor playground, and you are treated to a great view of the attractions for the younger set below.

This style of play structure isn’t new. Luckey, LLC. has been in business since 1985.

Of course, there would be one in Columbus. With a small city so devoted to art and architecture, style, and community, it isn’t surprising.

The Luckey Climber is located in innovative spaces around the world.

And why not? Look at the creative use of color and form and space. It is a kid magnet. I love that it includes the Columbus logo, the “C” used even as bike racks on the city streets. Clever stuff.

Fortunately, even little ones not quite ready for the big time can still enjoy The Commons.

Rules of Play at the Commons Indoor Playground 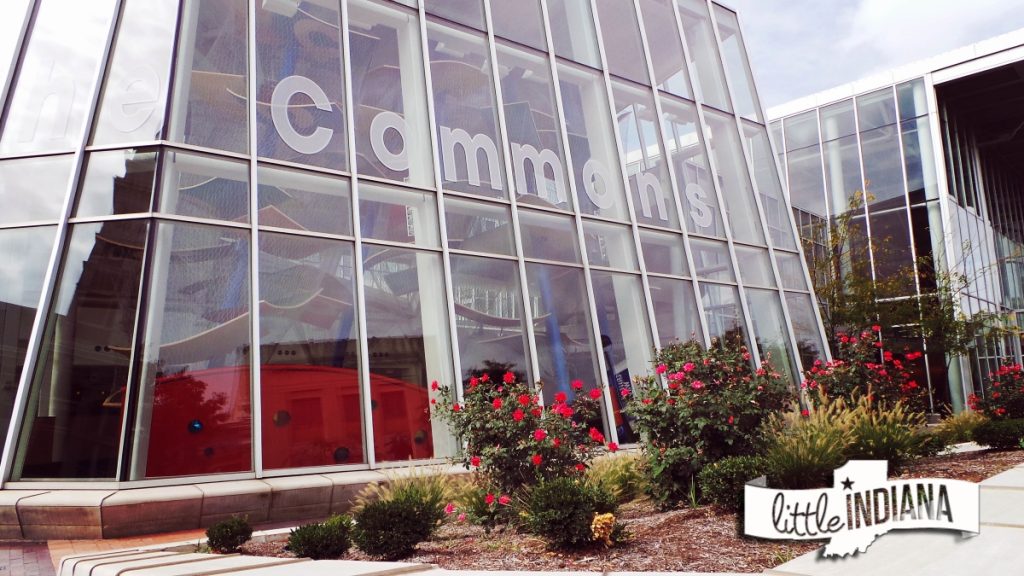 Don’t tell your kids you are headed to the Commons in Columbus. Instead, let them experience the surprise of seeing an amazing two-story playground through the window. It’s so worth it.

Before you head out the door, there are a few things you need to know.

The first? The indoor playground has set hours. You can view those hours below.

Also, keep your shoes on. Both you and your kids shouldn’t be barefoot or run around in socks.

There is no one here to keep an eye on your kids. It’s an unsupervised play area.

Your children will absolutely love it with every fiber of their little beings.

No food or drink is allowed here although there are a couple of places to eat behind you.

Have you visited the Commons in Columbus? Do you have any tips for other families to help them better enjoy the experience?

By Jessica Nunemaker|2018-02-26T15:37:08-05:00February 4th, 2018|Attractions, Bartholomew County, Columbus, Indiana City, Little Towns, Play, Southern Indiana|Comments Off on The Commons is a Free Indoor Playground in Columbus (with a two-story climber)